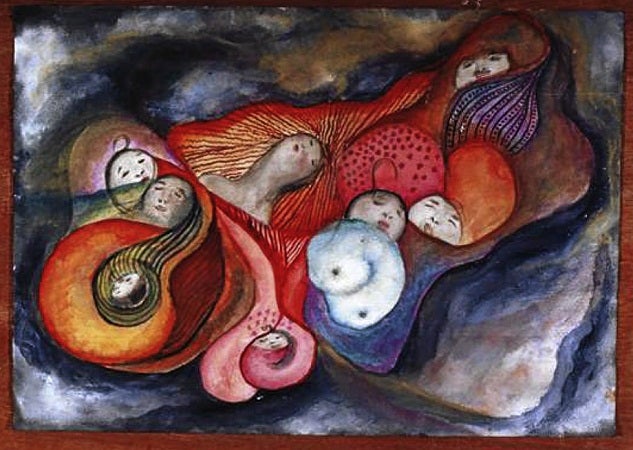 From time to time, National Artist Francisco Sionil Jose poses questions like, “What is wrong with us?” or “Why we are so shallow?” And one day I got bristling mad and told him, “Speak for yourself, Frankie!”

Of course he just laughed at me and said, “Not you, but we as a people.” “But I am a people!” I said indignantly, “And such statements make me boil.” He laughed even more and continued to invite debates still more depressing.

By then truly aggravated, I suddenly remembered a contemporary who had been an honor student but somehow never made it in life. He was always in dire need, buying and selling odds and ends to keep body and soul together. Whenever he visited me he would complain over and over how poor and luckless he was.

Suddenly I remembered those affirmations that “abundance” workshops assigned participants to repeat, “I am loved,” “I am beautiful,”  “I have everything I need.”

My friend’s was a mantra, too, only in reverse. Looking at him made me realize that, yes, repetition does make what you repeat become reality.

That was my brief with Mr. Frankie Sionil Jose. I was his direct opposite. I know he loves the Filipinos, too, but he criticizes them negatively, if brilliantly, while all I want is for my kabayan to feel the simple joys of being loved.

Often a middle-class district suddenly leads to an older, crowded, poorer but more interesting artery of the city. I prefer visiting there than Makati which is seldom original. If it is May, there is a small procession with a few queens in long, shimmering dresses and a Marian image, loaded in a tricycle, cutting through a main thoroughfare.  If it is the district’s feast, the streets have bamboo arches and buntings although the buntings are now plastic strips with advertisements of colas.

Many of the sights I enjoy are violations of some city ordinance or another. There is a wake on the sidewalk where a tong-its table is trying to raise enough money to bury the dead guy in the coffin. Caught in traffic, I can enjoy every sari-sari store with its own unique style of hanging packets of kropek, detergent, shampoo, coffee. A “Bumbay” riding a motorcycle is collecting his 5-6 lendings. A softdrink truck is in the middle of the small eskinita, causing a minor traffic jam clear to the corner. A dancing policeman is trying to unravel the mess.

Someone is repairing his stand-up electric fan on the street, beside him an old man having an open-air haircut. A fat woman is peddling a bilao of fresh kanduli. At a billiard place in the corner, a young father is watching a game, coddling his one-year-old child sleeping on his shoulder. The car shop next door is on merienda break and the repairmen are airing themselves on a long bench outside. What fascinates me are the different ways they are able to wear a T-shirt.

One has his T-shirt pushed up, his belly exposed, as if to air it. Another has only two arms in the long sleeves but his head and his torso are not in the garment. Another has his head in the neck hole but nothing else. Still another has tied his long-sleeved T-shirt around his head.  The last guy on the bench, thank heavens, has got his T-shirt on properly.

I am fascinated with everything I see. “Hoy, mga retaso, sakay na kayo,” a jeepney driver is calling out to kids (who are presumably from his neighborhood) for a free ride home in his empty jeep. One Sunday it is a tricycle driver who is taking his family out for an airing. There are seven of them and they are packed in every part of the tricycle.

We have come upon a cul de sac which is smoky and wafts the aroma from its barbecue stands. A woman is fanning the embers with a half-burned anahaw fan. The smell is making us hungry. There is a table selling kwek-kwek, boiled chicken eggs coated in bright-orange batter.  Around a fishball cart are laborers in kamiseta, pushed above their bellybuttons, dipping in a communal jar of sauce.

I know we have come to an area where the squatter shanties begin because there is a wall to which are attached Meralco meters—30 in all! I do not look at barong-barong as sociological problems but as testimonies of survival and folk art.

The stairs are made of found objects, from flat stones to wooden planks, concrete slabs and gasoline drums.  There are hanging gardens by the window, dapo in coconut husks, and tins of flowering plants suspended by wires.  On every step is a make-believe flower pot with a plant.

A car tire holds the roof down in case of a typhoon.  The area is abloom with TV antenna with not a single TV inside.  All the ukay-ukay clothing is drying on some line outside.  I find some of them really cute.  The graffiti gets denser and denser and leads to an area that I dare not enter.

I love my crowded city, its charm and wit, its faith and loyalty, its frivolities and stupidities.  I love the positivity of its poor districts and how it believes it will always bounce back, right side up.  I love it like a mother loves its child that never learns, unconditionally and without guilt.