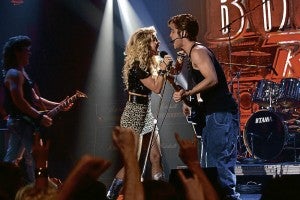 Remember the time when you fought with your mother over why she would turn off your glam metal-baring radio so she could listen to her Paul Anka, Carpenters, or ABBA on the gramophone?

Well, that period (and maybe mom) may have passed, but guess what? You can raise those hand horns and bang your head again, thanks to the music genre’s resurrection in “Rock of Ages” (from Warner Bros. and New Line Cinema).

Based on the Broadway musical of the same title, “Rock of Ages” is the homage to the defining 1980s music that had us all shirtless over tight leather pants.

Each generation will always have their tune, but who can argue with names like Def Leppard, Styx, Foreigner, Journey, Bon Jovi or REO Speedwagon? Who are not familiar with power-chord-heavy classics like “I Love Rock ’n’ Roll” and “Paradise City,” or power ballads like “Waiting for a Girl Like You” and “Every Rose Has Its Thorns”?

The musical originally starred “American Idol” IV’s Constantine Maroulis, and would go on to be nominated for five Tonys, including Maroulis for Best Performance by a Lead Actor in a Musical.

You read that right. Surprisingly, it was no “Mission: Impossible” for the Hollywood A-lister, who cruises through another humorously self-deprecating role not unlike his Les Grossman for “Tropic Thunder” (2008), also written by Theroux. The bonus? He sings, passably so, that through all that parody onscreen it seemed like he was having “Nuthin’ but a good time.”

But at the center of the story is a beautiful, if somewhat naïve, girl named Sherrie Christian (Hough), who has just hopped a bus from her small Midwestern hometown in pursuit of her Hollywood dream to be a singer.

With hopes high, Sherrie immediately experiences a bit of a rude awakening. The disappointment doesn’t last long, though, as she’s rescued by handsome barback Drew Boley (singer Boneta), who offers her what she needs more than anything in the world: a job.

The place of work is the stuff of rock legends—a bar hard on its luck but that had once been home to rock icons back when they were starting. Here, that is the Bourbon Club, run by Baldwin’s and Brand’s characters. 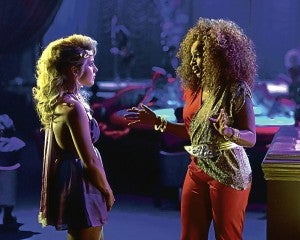 Dennis and Lonny have more trouble to contend with, however, than just Stacee Jaxx’s commitment issues.  Patricia Whitmore (Zeta-Jones), wife of the mayor, has declared war on the Sunset Strip, and her inaugural battleground is the Bourbon.

The screenplay’s rewrite of the stage characters of Franz and Hertz, the German duo wanting to take down Sunset Strip to make way for a development project, into a political husband-and-wife team on a moral crusade against rock music, was a perfect call, as it paved the way for the cast to be joined by Zeta-Jones, who won the Oscar Best Supporting Actress in the film adaptation of another musical (“Chicago,” 2002).

The songs have had to be rearranged, too, because of the changes in roles. But the music mixing by Adam Anders and Peer Astrom still gives us a good narration in song, one that is both quirky and funny, reminiscent of how we laughed at the similar use of song lyrics in “Mamma Mia!” (2008) and “Across the Universe” (2007).

We may safely say the film is not for everyone, especially those who are not familiar with the music,  but that is only if you will take it seriously.  A word of advice: Do not.

As with most musicals, “Rock of Ages” is a bit of a good-natured, good-humored parody, exaggerating scenes and circumstances. Have the actors belt out rock music while they are at it, and you have a lighter frolic in whatever the situation is, for example, a strip-club scene, than when the film treatment is straightforward, figuratively without the songs playing in our heads.

There should be a lot of laughs from audiences, and nostalgia for the select generation that quietly nurtured personal rebellion through the bad-ass riffs of Styx’s “Renegade” or Bon Jovi’s “Wanted Dead or Alive.”

So raise those hand horns and feel the hair growing on your balding heads. “Rock of Ages,” as its name implies, says there are just some things you can never leave behind.

How can you? You might consider them part of your stupid past, but you have got to admit that they were glorious. In two words: They rocked.