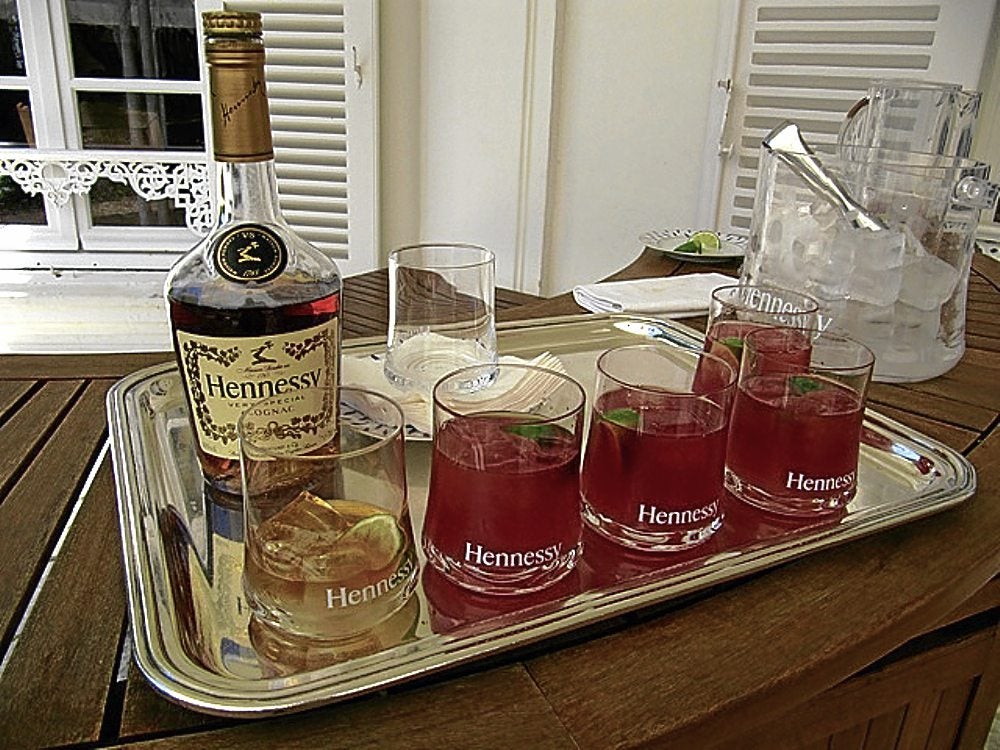 How cognac is made–and why it’s quintessentially, exclusively French

Fueled by a growing middle class with a voracious appetite for aspirational products, Asia, including developing markets like Vietnam and the Philippines, is beginning to develop a taste for cognac.

Apart from China, Vietnam has been leading the way in cognac consumption, even surpassing Japan recently.

Although the Philippines doesn’t have a long tradition of cognac drinking like former French colony Vietnam probably does, Filipinos have always been a big market for the cheaper Spanish brandies, which, like cognac, belongs to the family of so-called “brown spirits.”

As the Philippine economy continues to grow, more Filipinos are likely to level up in their drinking preferences. The market is bound to be flooded with so many options, both imitations and the genuine article. It pays to know your cognac in order to get your money’s worth.

Anyone can claim to make cognac, but under a century-old French law, only distillers based in France’s Cognac region have the right to call their double-distilled spirits stored for a time in oak barrels (thus, the brown hue) “cognac.” Companies based elsewhere, whether within or outside France, which still publicly insist on marketing their products as cognac, are guilty of misrepresentation, and can be hailed to court.

There’s a similar law that’s in effect in Champagne, another region north of Paris. Only those based in Champagne can call their sparkling wine, well, champagne. Others can settle for “bubbly” or whatever their marketing arm could think of (we’ll focus on Champagne next time).

Foreigners may dismiss such a law as frivolous, but not the French who take their centuries-old wine-making tradition seriously, and rightly so. We soon understood why after separate trips to Cognac, located southwest of Paris and adjacent to Burgundy, and, a few days later, to Champagne, with Olga Azarcon, the Philippines’ country manager for Moët Hennessy.

Moët et Chandon produces champagne, while Hennessy is into cognac. The two companies became partners in 1971 to form Moët Hennessy. In 1987, Moët Hennessy joined the Louis Vuitton group of Bernard Arnault to become part of LVMH, the world’s biggest grouping of luxury brands.

From the more affordable VS, XO and VSOP, to the top of the line Paradis and Paradis Imperial, Hennessy has something to offer the discriminating client depending on his preference, current mood and even budget.

More than 250 years since Richard Hennessy, the company’s Irish founder, set sail to France from Ireland to establish the business, the house of Hennessy has grown to become a global brand. (A bottle of limited-edition Hennessy cognac named after him costs around P150,000.) To this day, the company is still partly owned by his descendants.

One of them is Frenchman Maurice Hennessy, a member of the eighth generation, who, with his disarming ways and quaint British accent (he spent some time in England), is an ideal brand ambassador.

“The great thing about demand for Hennessy is it’s evenly balanced between the US, Asia and Europe, particularly Russia,” said Hennessy. “Even parts of Africa like Nigeria are doing well. But I won’t lie to you. China is very important, and so is the US where we sell more cognac (than in France). If I’m going somewhere, it’s because that market is important. They don’t send me to markets where they don’t drink at all like Saudi Arabia or Libya. At least, not yet.”

Maurice Hennessy, a trained agronomist, is also one of 1,400 growers who supply Hennessy with grapes. Only white wine produced from white grapes will do, as red wine is too robust and considered coarse and inelegant for cognac production. The company’s 200 hectares of land planted to grapes, which function more as a showcase that sets the standards for suppliers to follow, barely cover one percent of its needs.

Together with the articulate and equally witty Jean-Michel Cochet, Hennessy’s official “ambassadeur de maison,” and Renaud de Gironde, a member of the company’s tasting committee, the three men gave us a series of interviews and a two-day tour of Hennessy’s facilities sometime in May, including its postcard-pretty distillery, antiseptic tasting room and centuries-old “founder’s” cellar, where certain oak barrels of cognac vintages date back to the mid-19th century.

One of the keys to a good cognac is consistency. And you can get that only by producing the right blend composed of various vintages. Tasting various cognacs to know what to store, what to use, and at what amounts has kept Gironde and his colleagues, led by Hennessy’s master blender, busy every day for at least one hour (see sidebar).

“All Hennessy cognac is the result of a long blending process,” said Cochet. “By properly blending different elements, you create the desired style and character, which customers have grown to know and are looking for. The same taste profile and enjoyment should be duplicated despite the fact that components are never the same.”

And it all begins with distilling quality eau de vie (water of life) from white wine pressed from grapes grown and harvested within the region. When it finally emerges from the double-distillation process, eau de vie is as crystal-clear as water. The time spent in oak barrels will create its transformation, from the taste down to its color.

Except for harvesting grapes with machines, the entire process has remained basically the same as the family’s ancestors did it hundreds of years ago. Cochet even suspects that the process of distillation originated from the Arabs long before huge parts of the Middle East became Muslim.

“When you’re drinking a good glass of wine, you’re not enjoying the water,” he said to illustrate the importance of distillation. “Otherwise, why would you spend so much money when mineral water is much cheaper? What you’re enjoying is the remaining 12 percent, which is basically alcohol. It gives the wine components, structure and elements that leave it with a nice aroma.”

As Cochet explained it, the distiller consists of a steel head and “swan’s neck”-like pipe, which coils all the way to the back and into a big cylinder that functions as the condenser, which comes with a funnel from which the first and second flows come out.

The boiler or steel head is filled with 2,000 liters of white wine, which is boiled slowly by gas-fired open flame. The process can’t be rushed since evaporation involves only the most volatile part of the white wine, the alcoholic part, which also carries the aroma. Since the heat is regulated, water won’t evaporate with the alcohol.

As the steam slowly rises, it is channeled into a condenser with a coiling pipe drenched in cold running water. Due to the change in temperature, the steam eventually turns into liquid form composed of three parts: head, heart and tail.

“The head, as it name implies, is heady,” said Cochet. “Its aroma is too strong so we separate it. What we get is the second part, the heart, which is what we need. Then comes the watery part called the tail. It’s not pleasant, either, so we separate it.”

The head and tail are collected separately and “rechanneled” back to the next batch of wine to be distilled. The watery part of the wine that’s left in the boiler is sent to a nearby plant to be converted into biogas.

Only the heart or “brouilli” (pronounced as boyie), which consists of 30 percent of the condensed steam, undergoes a second distillation following the initial procedure. Again, only the second distillation’s heart part, now known as eau de vie, is kept for eventual aging.

Everything is monitored manually based on parameters set by the master distiller. Normally, after an hour and 15-20 minutes, the first flow arrives. Based on the flow’s temperature and alcohol content, the one manning the process would know when the heart part is coming and when it’s about to end.

“Here at Hennessy, we distill wines coming from the 200 hectares belonging to us,” said Cochet. “We do a craft distillation, which is a system we use for small batches of distillation.”

If the house has a bigger batch of wine sourced originally from various vineyards within the region, it resorts to automated distillation. Apart from its three distillers, Hennessy has 19 contracted distillers that own and operate similar equipment. A good number of the 1,400 growers distill their own production.

“Most of them have only one unit. They make the initial distillation, which we collect later for us to do the second distillation,” said Cochet.

It takes nine liters of wine to obtain only one liter of eau de vie after 24 hours of double distillation. What’s more, because of evaporation, only 2/3 of that liter of eau de vie is left after 25 years of maturation time. After 50 years, only one-half is left.

“The process is that long and complex,” said Cochet. And it’s also costly.

Proof of this could be seen and sniffed in the founder’s cellar by the river almost across from Hennessy’s corporate offices. Apart from the robust scent of alcohol reeking all over the cellar, its walls and beams are covered in a black layer of fungus, which, we were told, feed on the eau de vie’s evaporating fumes.

“We don’t need that fungus,” said Cochet. “It’s just here taking its share of our products. We call this evaporation the ‘angels’ share.’ Around 20 million bottles every year, more bottles than we sell to the Philippines, escape in the form of evaporation. These angels enjoy our products for free.”