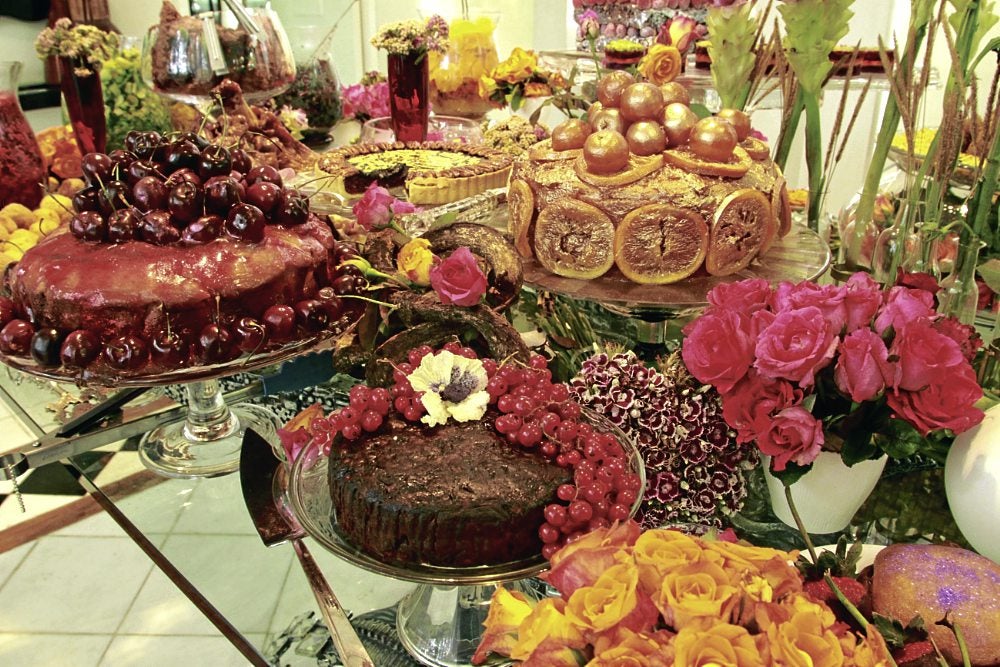 There’s always a magical quality about the parties held in the place of entrepreneur and civic leader Kathleen “Maymay” Liechtenstein.

For the induction of the officers and board members of Zonta Club Alabang, of which Maymay is new president, she chose a  garden-party-in-June theme. The place was a burst of vibrant colors. The canopies and eaves were decked with huge bouquets of roses.

The merienda buffet was a cornucopia of sensual delights laid out on Gabby Barredo’s table. Gnarled vines, roses, cherries were juxtaposed with sumptuous food, some of which displayed on crystal plinths. The dishes themselves became the décor. Color-themed salads were presented in large glass containers—blueberry with bulgur and red cabbage dyed in blueberry; Israeli couscous with corn, apricots and green cherry tomato; edamame with avocado, grains, broccoli; red quinoa with sugar beets, cranberry, strawberry and basil; and lentils with orange and squash.

The scotch eggs were hard-boiled quail eggs, wrapped in beets, ube, camote instead of the usual sausage, then coated with taco shells, brioche and whole wheat crumbs and deep-fried. Juicy turkey legs were prepared in the Liechtenstein style—sous vide or slowly cooked. Kalitiran, which means beef cut, is also prepared sous vide while the baked chorizo is baked like a casserole swimming with cheeses. As if it weren’t enough, there were smoked salmon with sparkling roe and ham turrine with chewy English nougat.

The sweets comprised the second half of the buffet—Whoppee pies, Nutella with ganache filling, Valhorna chocolate blintzes made of crepe batter that are rolled in cinnamon sugar and filled with cream and ricotta cheeses; classic pound cake topped with dried cherries, rhum and sugar glaze; Russian pasha with its melange of pistachio, almonds, citron and candied peel, farmer’s cheese; pudding cake with carrots and berries. The sticky toffee pudding was dripping with fresh cranberries.

Some desserts sparkled with edible, metallic dust. The chocolate torte with a ganache of strawberry on each layer was covered in glitter. The pecan pie was dusted in amber and bronze, the orange layered cake was candied in gold.

Lace mantles covered the tables. The plates were rimmed with ornate details that mimicked the lace patterns but geometric cutlery provided a stark contrast to them. Each plate was adorned with a mini cup of M&M’s with a rosette. They not only added color but ladies could entertain themselves by nibbling on them while listening to the proceedings of the meeting.

For a sophisticated touch, edible rose petals from Italy were sprinkled on the table. Before the program, the members were given a sealed envelope containing a butterfly. It was such a surprise to open it and see a swarm of butterflies hovering the dining area.

In her acceptance speech as Zonta Club Alabang’s new president, Maymay talked about how she joined the Muntinlupa chapter and learned about camaraderie and community service. Six years ago, she pioneered the Alabang chapter with Denise and Carmita.

“In Muntinlupa, where I joined originally, I realized it’s about giving to the community with friends. I put up the Alabang chapter so that our friends could grow up together and we inspire more younger women to join,” says Maymay.

Through the years, Zonta Club of Alabang has organized feeding programs, medical and dental missions, and raised funds for the indigent communities in Muntinlupa. Its annual bazaar raised P1.4 million last year. The Zonta donated mammogram machines to the Ospital ng Alabang and embarked on a breast cancer awareness campaign. With Glaxo and the Department of Health in Muntinlupa, it provided nearly 3,000 flu vaccines.

Maymay says the club doesn’t want to give dole-outs. Most of these programs are values-based. With SOS Village children, the Zonta formed the Mothers for Ampalaya, Malunggay and Amorgoso program where women and children are taught planting, harvesting and nutrition.

When Zonta donated 400 bicycles, the children were taught how to use the bicycle to take them to school and how to use it for their livelihood, such as selling vegetables on weekends. Sylvia Pertierra raised funds to buy helmets for their safety.

Fire in the belly

One of their heart-tugging projects is helping out a community that was displaced by “Ondoy.” The parents have to find work for several days and leave the children to fend for themselves. Zonta is collaborating with the Muntinlupa public school by giving children scholarships. In September, interior designer and art educator Bambi Mañosa-Tanjutco will teach art together with self-esteem to the girls so as to keep them off the mean streets.

Economist Winnie Monsod was invited to deliver an inspirational talk, which was more like “putting fire in the belly.” She talked about heroes who are usually ordinary people doing extraordinary, altruistic and selfless service.

“Hold on to your seats,” she quoted psychologist Philip Zimbardo as saying, “Heroism is the antidote to evil.” She said people have the choice of being a perpetrator, being complacent of evil or taking an active stance. As an example, Monsod cited the National Movement for Free Elections, a nonpartisan group that serves as an election watchdog. During the snap elections in 1986, many women volunteered to guard the polls against cheating.

She then challenged the Zonta women to go beyond their conventional activities and aim for achieving a higher purpose, such as maintaining good governance in Muntinlupa.

“When people say it’s none of your business; stick to kids. You should answer, ‘Humanity is my business!’”