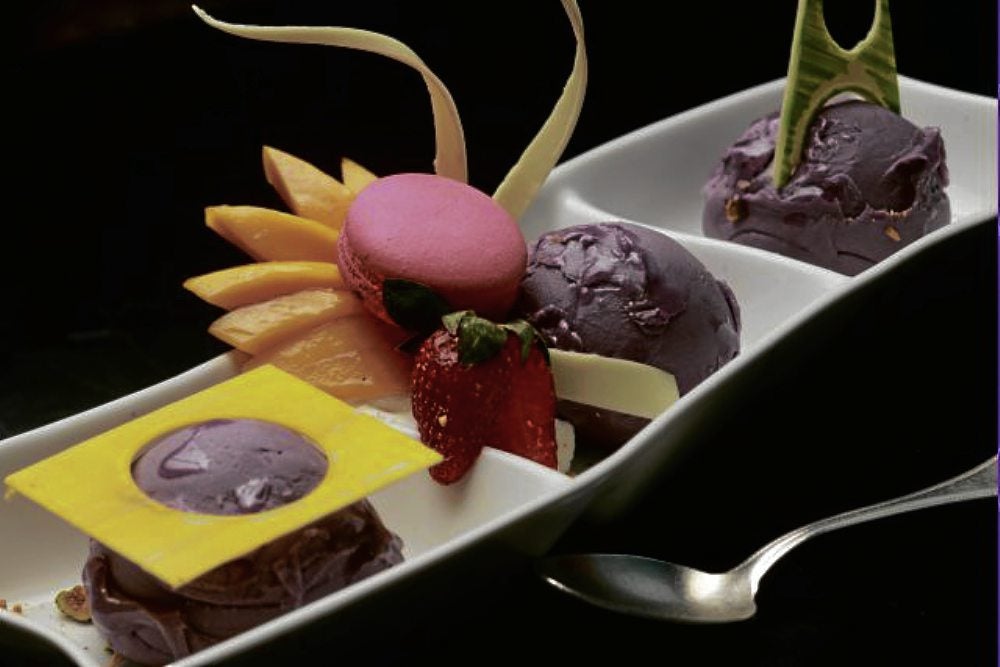 Served with chocolate-striped barquillos and a thin chocolate cone, the Tsoknut gelato tasted as if one was eating bits of the iconic candy, this time infused with cream. The taste brings back childhood memories of simple pleasures.

Between rain showers, the heat still gets harsh. Hence, the gelato makes for a welcome treat. At Hotel Inter-Continental’s outlets, the ongoing gelato festival features  flavors by Fiorgelato selected by style maverick Rachy Cuna. Aside from Tsoknut, he also highlighted dark chocolate, buko-lychee sherbet, mango and ube to introduce local flavors to foreigners.

The gelato festival is part of Intercon GM Christian Pirodon’s advocacy to promote Filipino culture in the hotel.

Fiorgelato is a Filipino-branded ice cream produced by Rachy’s brother, Ricky.  An ice-cream lover, Ricky bought Fiorgelato, then an Italian franchise, from an Italian some 20 years ago. When the Italian brand became defunct, Ricky had Fiorgelato patented as a Filipino brand. Still, it maintained the tradition of intense flavor, creaminess and no air.

“That’s what makes it a gourmet product,” says Ricky. On the difference between gelato and ice cream, he points out that gelato  has less fat and has no overruns unlike ice cream.   “What you mix is exactly what you cook.”

To improve his product, Ricky studied the technical process of ice cream and gelato making at the Pennsylvania State University and took short courses on traditional gelato making in Italy.

Ricky follows the Italian culinary precept of using only the best ingredients. The milk is imported from Australia and New Zealand while the chocolate, pistachios and others are sourced from Italy. The mangoes are from Guimaras, the province known for its sweet mangoes.

He is proud that Fiorgelato entails full production, starting with the pasteurization of milk, unlike other brands that use premixed formulas.

“Gelato making is a labor of love and hard work, not mass production. It’s done with gusto and artisanship,” says Ricky.

Through the years Fiorgelato has produced 72 flavors, some of which are made according to the season and availability of ingredients.

Among the classics are the pistachio, cappuccino and the cioccolato. All the sorbet are made from fruit and natural sweeteners.

There are extraordinary flavors for the local market—  fragola, with swirls of juicy strawberry; guyabano sherbet, with its sweetish-sour flavor and underlying creaminess;  and durian gelato in Davao.

Fiorgelato has 50 branches nationwide and has opened stores in Malaysia and Japan where Fiorgelato has produced unusual flavors such as wasabi, red beans and purple yam.

Rachy’s personal favorites are  vanilla, with the melding of the bean and the cream;  Bailey’s Irish Cream, whose liqueur gives a kick; and hazelnut.

Ricky observes that the ice-cream industry is diverse as it is competitive, ranging from the dirty ice cream and popular commercial flavors to  gourmet ice cream. Nonetheless, each category has its own market.

“Fiorgelato has survived 20 years because it keeps improving through the years. It has withstood the test of time,” says Ricky.