Why everybody wants to be Liz Uy | Inquirer Lifestyle 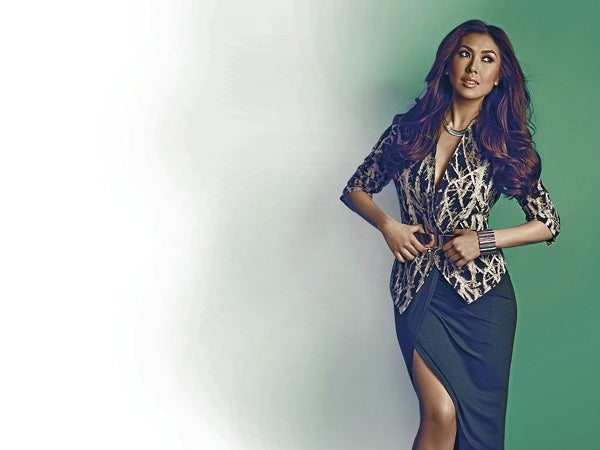 Why everybody wants to be Liz Uy

Everybody wants to be Liz Uy.

A minted “it girl,” she’s glamorous, she’s on the cover of magazines, she’s friends with famous people and she dates influential men.

Uy laughed when told about the  remark said in exasperation by one newspaper editor who was lamenting the dearth of young people who want to work in the print media and are willing to put in the work. They just aspire to be Uy, said the journalist, referring to the fashion editor -turned-celebrity stylist-turned cover girl.

But Uy herself would be the first to tell her adoring fans that “Liz Uy” didn’t happen overnight.

“It takes hard work,” Uy said, who, this week, was introduced as the new endorser of Plains & Prints, the brand she has been styling since 2006.

“A lot of people think the job of a stylist is glamorous. It’s not about rubbing elbows with celebrities and famous people. Contrary to belief, I don’t go out a lot. Of course I go to events because these are advertisers; it’s part of the job.”

Yes, she conceded the spotlight got trained on her owing to the men she has dated, but no one can accuse her of not having paid her dues.

“When I started as an editorial assistant [for Preview magazine], I used to do all the fashion pages, all the products, on my own,” she recalled.

At that time, there were no  assistants, “so I would pull out and spend all day waiting in the mall, and even a whole day wouldn’t be enough! I would be begging!

“In the summer I would pull out like a thousand swimsuits, I would shoot on my own. I would tape the [bottom of the] shoes, order food for my talent, steam the clothes, and return the clothes myself,” she said. “I had very good training.”

Now “even the editorial assistants have assistants; the stylist just has to pick out the clothes in the store and an assistant will pick up and return them.

“I’m happy that I experienced all that. Even if I don’t have an assistant I can do things by myself. Now they think as long as you have the eye, you don’t have to do all that stuff.”

Uy now employs a staff of four, and has become as much a celebrity as her high-profile clients. Still, just as she was trained, she said she hasn’t become too big for her designer breeches that she won’t quickly drop on her knees to fix a client’s hem if need be.

“In shoots I dress down, to let them know that they can still order me around, because that’s really my job,” she said. “Whatever I have now, it’s the result of hard work, timing and luck.”

I first met Uy at a media junket in 2006. She was then a fashion associate for Preview, and her name had just started cropping up in show-biz gossip: She was dating  actor John Lloyd Cruz.

Uy struck me as quiet and shy. She didn’t call attention to herself; she dressed simply and didn’t even wear makeup, a far cry from the chatty, self-assured glamazon that she has morphed into.

When she and her famous then-boyfriend would go to the mall, his fans would either glare at her or ignore her. Pretty even sans makeup, Uy was self-deprecating of her looks. She admitted she had insecurities when she was younger.

“They say people knew me by association, because of the celebrities I style and the powerful men I’m being linked to. Those are all true,” she said. She also knows that her so-called market value increased exponentially owing to her dating history: Apart from Cruz, she also briefly went out with President Aquino in 2010.

But past this media attention, Uy claimed not much has changed about her.

“The only difference is that I talk a lot now,” she said. “’Di na ako shy. They used to say I’m elusive.”

Now she can discuss her dating history, sharing intimate details that reporters would have killed to know back in the day.

Uy said that her 2009 breakup with Cruz had a role to play in her transformation. “The best revenge, right?” she said with mischief in her eyes.

“My dad says that he was grateful [for Cruz], that that [breakup] happened to me, because I was so sheltered,” she added.

Uy vowed she would no longer shun the attention. “I might as well embrace it,” she explained. “This is a blessing. It’s so hard to endorse a big brand, or to land the cover of a magazine. I no longer care what people say; for me it’s a good cover…” 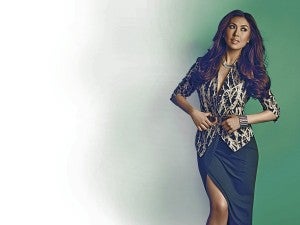 But she added, “I’m still the same, [I have just] evolved. I think it would be worse if I didn’t evolve at all.”

When she turned 30 last February, Uy signed up with Viva Entertainment.

She looked mortified when asked if she would do movies soon.

“I’m very happy where I am now. Why will I give people a chance na kutya-kutyain ako?” she said, laughing. “Viva wants to break me in, maybe small roles.” But she would rather do TV hosting.

“Magazines and blogs have become more influential,” Uy said. “It’s free online, there’s no more reason to look bad. There are clothes that are not so expensive, you just mix and match. You just have to know your own style. You don’t have to spend so much to belong.”

Uy said there’s nothing wrong with experimenting and making mistakes in fashion. Even this fashion plate has been there. “I don’t wanna look back! What was I thinking? I even cut my hair short!

“When you go to events, you can tell [which ones are the bloggers]. But they will evolve and learn what they’re comfortable in. It’s the environment. When you age, it evolves.”

For Roxanne Farillas, creative director of Plains & Prints, Uy was an easy choice as product endorser. Farillas, who shares designing duties with Rhett Eala, has known her for six years. Uy used to style the clothing brand’s campaigns, and Farillas believes Uy’s following of aspiring fashionistas is a potential market.

“She’s someone our market can relate to,” said Farillas. “Liz is a successful, thinking woman. We’re not just about artista.” (Plains & Prints’ former endorsers include Gretchen Barretto.)

“Changing our style is out of the question. Plains & Prints has always been sophisticated, for the up-and-coming professionals. But with Liz, we want to say that it can also be different, depending on how you style it. It can be edgy or sophisticated. You have all the options. It’s for the same market, but with different styling.”

Styling Uy in the Plains & Prints pictorial was her older brother Vince, creative director of Preview.

Uy said Vince was a major style influence on her growing up. She followed him around, and his love for fashion soon rubbed off on his sister. Even now, as she maintains her roles as editor-at-large for Preview and Esquire, she said she and her brother collaborate a lot.

The Uy siblings, including youngest sister Laureen, also a popular blogger who designs her own clothing line, are very close.

“We criticize each other,” said Uy of her brother. He’s her No. 1 critic who would call just to scold her about whatever it was that she wore to an event. “He only wants the best for me.”

Uy’s parents are both bankers and a very “unassuming” couple, so shy and low-key that they’re quite a contrast to their often-photographed children.

“My mom says that when my dad hears about the guys being linked to me, he wonders aloud, ‘Ano kayang nakikita sa kanya?’ When gifts from suitors arrive in the family home, the teasing doesn’t stop. “Sino na naman ang nauto mo?’ Even when my celebrity friends come over, hindi sila pa-cozy. I have humble parents who I look up to.’”

While Uy is enjoying the perks of her celebrityhood, often she still has to pinch herself, unable to believe her good fortune. “I was comfortable being a stylist. My only dream was to become a good, credible stylist. I only wanted to become a fashion editor. I exceeded my own expectations of myself.”

Uy said she’s thankful to  Cruz for opening doors for her. “He’s very special to me,” he said. “Before we wouldn’t talk. But recently nag-uusap uli kami, though it doesn’t mean anything… No question, people wouldn’t have known of me if not for him. But he was very generous about it. He said everything is owed to my hard work and talent.”

She’s not seeing anyone, and Uy said she can’t help it that the names of men she dated  keep cropping up each time she’s interviewed. It’s part of her history.

For now, she is content on being called “stylist-slash-endorser,” as her list of projects and product endorsements continues to grow. “It’s still unbelievable! Imagine, I was just styling for Plains & Prints, now I’m their endorser.”

No wonder everybody wants to be Liz Uy.