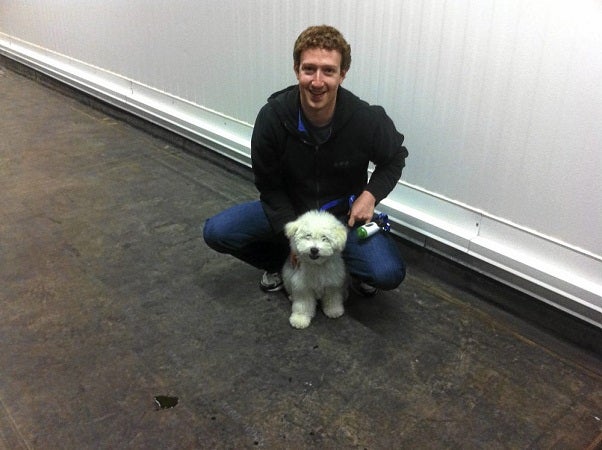 In order to get over 33 million views on YouTube, Rebecca Black had to sing a humiliating song about Friday.  Cooper the Golden Retriever puppy racked up 15 million views  just for falling asleep (adorably) on a stair step.  If you wanted to become an Internet celebrity, it would be much easier if you had fur, walked on four legs, and had a perpetually wiggling tail.

I used to hate Mark Zuckerberg.  Yes, used to.  I started thinking that he must be an all right guy after Beast came into the picture.  Beast is a Puli, a type of Hungarian Sheepdog who likes to visit Facebook HQ with his dad (yes, Beast calls Zuckerberg “Dad” when posting status updates on his Facebook page).  When not with his dad, he’s busy bugging his mom, Priscilla Chan.  Beast looks like a mop with a pink tongue lolling out, but we all know that he may just be the richest, mop-looking furball in the world.

This little Pomeranian is known for his well-groomed round head that kinda looks like a giant cotton ball with a dog’s face on it.  Boo has over 4 million likes on his Facebook page, has his own book, and his own stuffed toy, made by Gund, no less.  He counts among his fans Tory Burch and the Kardashians.

Forget “Big Brother” and other reality shows, this is the most feel-good reality show you can watch 24/7.  The Shiba Inu Puppy Cam gives you a peek into the squeal-worthy antics of five Shiba Inu puppies called The D-Team—Daiichi, Dango, Dosha, Daisuki, and Dakota.  Catch them huddled together in slumber or greedily fighting over their mom’s nipples (puppies breastfeeding are the cutest thing ever!).  The livestream is completely safe for work, but be sure to keep your squealing and giggling to a minimum.  If you get hooked watching them, don’t worry, there are 54 million other viewers who are addicted to watching the Shiba Inu pups.

“Batdog” of Text From Dog (http://textfromdog.tumblr.com)

When we say we love Batdog, the nameless English Bulldog from Text From Dog, we mean that we really love October Jones, the illustrator behind the rip-roaringly funny SMS exchanges between himself and his dog.  We dare you to keep a straight face while Batdog (he named himself that) debates over text with his owner on who uses toilet paper   more productively (dog: mummy wrap or human: butt wipe?)

The Daily Wag – Francesca and Sharkey

Household name Martha Stewart is known for her love for crisp linens and fresh herbs, and of course, her dogs. Her Chow Chow Genghis Khan recently won “Best in Breed” at the Westminster Dog Show, while her two French Bulldogs, Francesca and Sharkey, blog regularly at The Daily Wag.  Check out their adventures at the farm, at the beach in East Hampton, and other adventures.

This pup is a legitimate Hollywood celebrity.  He appeared in the 2012 Academy Award Best Picture winner “The Artist,” and has his own Nintendogs TV advertisement.  He received special mention at the Prix Lumiere Awards and also won the Palm Dog Award at the 2011 Cannes Film Festival—one award more than most A-list Hollywood celebs.  He’s so huge that even though he did his own stunts while filming “The Artist,” he had two stunt doubles on standby.

Brigitte (aka Stella on “Modern Family”)

Gloria Delgado-Pritchett has a love-mostly-hate relationship with this cute French Bulldog who stole her husband Jay’s heart.  Brigitte has won a Golden Collar Award for her performance on “Modern Family.”