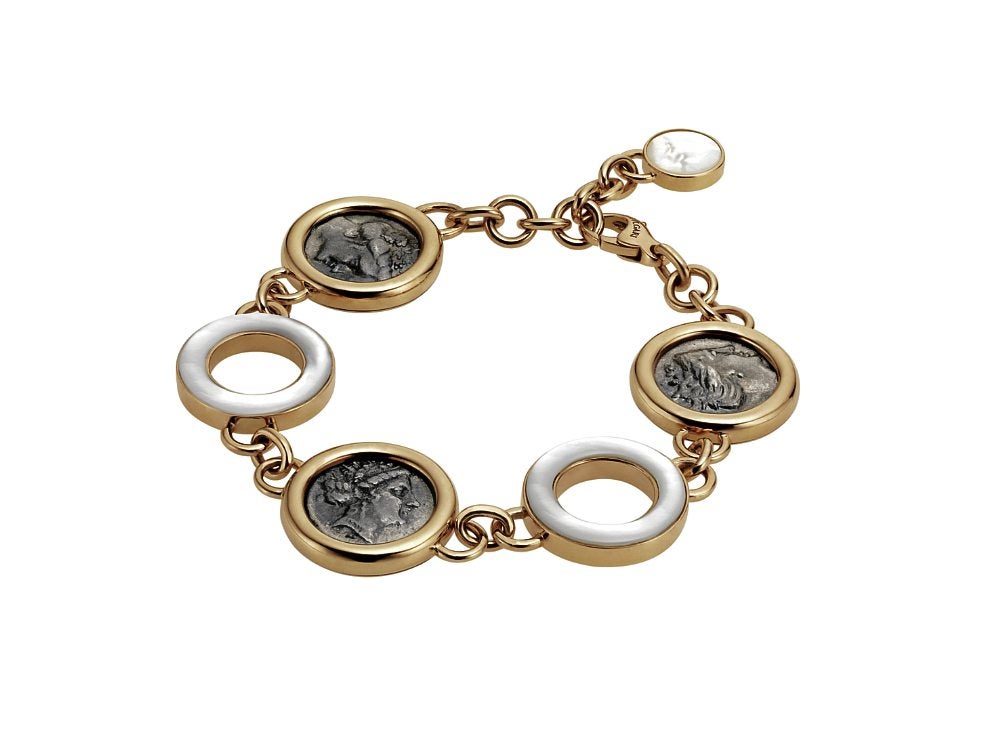 In lieu of colorful stones such as emeralds, rubies and sapphires, Bulgari is mining the past by combining ancient coins from Persia, Greece and Rome with pavé diamonds and mother of pearl set on 18-karat pink or yellow gold.

The collection is the updated version of Monete.

First introduced by Bulgari in the ’50s, Monete is a signature collection known for its classic elegance. It was updated in the ’60s and ’70s before its relaunch earlier this year.

As in the past, its most recent reincarnation has the “old-money feel” that appeals to the high-end jewelry market, said Mario Katigbak, GM of Bulgari in the Philippines. He and his team launched the Monete recently at the Arthaland Pavilion in Taguig.

A piece of jewelry need not be limited to diamonds and emeralds, “it could be made beautiful and precious by ancient coins because of their age and rarity,” said Katigbak.

Unlike in previous collections, which had earrings, Monete is limited this time to necklaces and bracelets. Several leather and gold necklaces with single gold-framed coin pendants of Greek and Roman origins are for both men and women.

Among high-end jewelry brands, “only Bulgari is known to have produced collections incorporating ancient coins,” said Katigbak. It took a while for the Bulgari family to unveil the new Monete because most of the antique coins that make up the pieces came from its own collection.

“They had to wait until they have enough supply of coins to do a collection,” said Katigbak.

Each piece comes with a certificate attesting to the coins’ authenticity, as well as their age and origin. And not just any old coin will do. Bulgari’s designers made sure that only ancient coins in their pristine condition were used. And since each coin was painstakingly set by hand, owners are assured that these relics from the past will last.

They also made sure that each piece features only coins from a particular empire and era. In other words, “you won’t see a Greek and Roman coin ending up in one piece,” said Katigbak.

Apart from its use of old coins, Monete has other qualities that are present in all Bulgari collections: secure locks, independent elements, fine, handcrafted details and backsides that are nearly as beautiful and finely made as the front.

Despite their fondness for colored stones, not a few Filipinos know about Monete and its quiet, Old-World charm. Katigbak attributes this to the parents and grandparents of these men and women who probably own a piece or two from Monete’s previous collections.