Getting enchanted in this kingdom | Inquirer Lifestyle ❮ ❯ 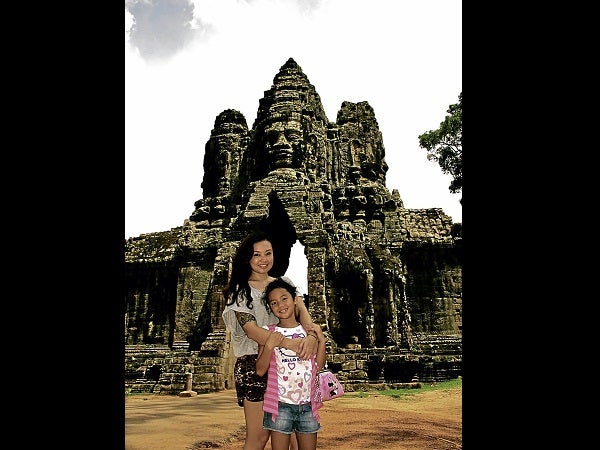 Getting enchanted in this kingdom

One will have certain stereotypical expectations of Siem Reap, some of which are right but once there, you will soon find out that there is so much more to the place.

From the airport to our hotel, you might think that it looks similar to the Philippines, but not Manila. I would like to think it’s more akin to a developing province, or even a beach-less Boracay before the big hotels and resorts. You won’t find any high-rises here, and cars, although available, are less popular than motorcycles, bicycles and their version of the tricycle—the tuk tuk.

If you are a tourist, the Khmer people largely prefer payment in US dollars rather then their local riel so be ready with bills in small denominations of $1, $5 or $10 as you will be hard pressed to find a shop owner at the Old Market who will have change for $100.

It would also be wise to book a guide in advance so that aside from marveling at temples, you will also understand how they came to be, as well as the turbulent history of the Khmer people.

You can’t go to Siem Reap (meaning: Defeat of Siam-now Thailand) without visiting the world-famous Angkor Wat. This is probably the most popular and recognized temple in Cambodia, so much so that it is on their flag.

Built in the 12th century, this temple is well preserved—you will be amazed. Head over and find a seat across Angkor Wat at 4:30 in the morning to wait for the sunrise before visiting the temple grounds. The extensive amount of bas-reliefs of apsaras (celestial dancers) and devatas (standing female dieties) will leave you in awe, especially upon learning that most of these commissioned artists spent a lifetime finishing these temples.

Another must-visit is the Bayon Temple in Angkor Thom, a huge labyrinth of steep staircases and big smiling faces. Originally built as a Buddhist temple by the king at the time, it was altered to become a Hindu temple after his death, and then back to Buddhist later on.

You will see this in the many modifications made throughout the temple. On an elephant, you can also go around the temple grounds for about $15 per person.

Ta Prohm is also a temple worth visiting. My favorite, it has centuries-old trees fighting for space with the temple. It’s most commonly known as the location where the movie “Tomb Raider” was filmed.

Over 30 km away is Banteay Srei, built in the 10th century for the Hindu god Shiva. Some people call this the “Lady Temple” because of the pink color it has acquired through time. It is one of the smallest but also the most intricately carved temples you will see.

When you want to take a break from temple-hopping and to experience other aspects of Cambodian culture, head over to Khmer Kitchen on Pub Street for some authentic local cuisine. I have to be honest, the first time I went to Siem Reap, I didn’t enjoy the food at all. This time around, I welcome the flavors of the country, which I can sum up in five ingredients—chili, lime, lemongrass, ginger and coconut milk. Expect flavors similar to Thai food without the sometimes-unbearable spiciness.

Khmer food is very simple, mild and comforting. Order the amok chicken, beef lab and the Khmer curry. If you want a break from local cuisine (which is served in almost any restaurant you go to, whether Khmer or not) try out other places such as The Soup Dragon for Vietnamese or The Blue Pumpkin for brunch, as well as the best ice cream in town. Your meals will cost you anywhere from $2-5 dollars per dish.

In the city center, you will also find the Old Market and the Night Markets. Shop for your souvenirs here. Available are traditional Khmer pants, sandstone, marble, brass and wooden carvings, as well as traditional spices, and kitschy but cute touristy shirts.

No price is final so don’t be afraid to haggle here to get a good deal. If you want more expensive but better quality items to bring home, visit Artisans d’Angkor, where young people are trained to be masters at a certain craft. The quality is impeccable and you can even tour the school to see how it all comes together.

If you want to learn a few Cambodian dishes, check out Le Tigre de Papier for a three-hour class where you will learn how to make a starter, a main dish and a dessert of your choice. A tour of the market is also part of the package.

There is something for everyone in Siem Reap, and there is an incomparable friendliness about the people that you just won’t find anywhere else.

Air Asia flies to Siem Reap from Clark via KL.