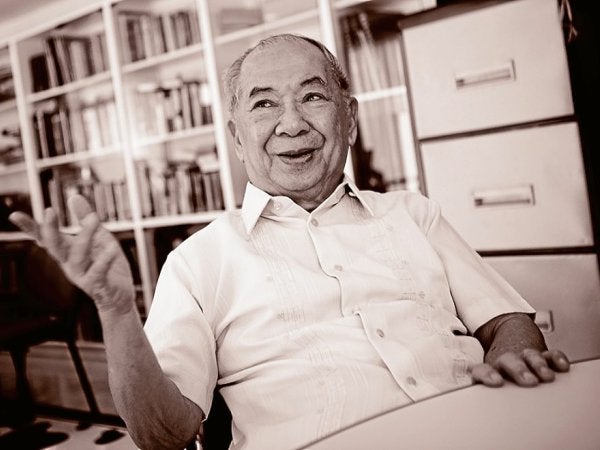 We are seated one rainy afternoon in the former Bangko Sentral governor’s office, in the home Gabriel Singson once shared with his wife Moonyeen.

Singson is now 83, but still strong and with a sharp mind. He pulls out a book, “To Give and Not To Count The Cost,” a collection of 150 essays written by Ateneans on the Ateneans they admired. Lawyer Perry Pe had written a piece on the former governor.

“Nakita pa ba niya ito?” he asks me in a gentle tone, on whether or not  Moonyeen had the chance to read the piece on him.

The former governor’s daughter, Carissa, and I grew up together. We had been classmates since first grade at Maryknoll, and many of us would see Gov. Singson through the years. We always knew him to be the strong, silent man who went about his work quietly. We saw him every now and then at parties  in their home.

Since Moonyeen’s passing, he has mellowed and perhaps has become more open now, where emotions are concerned, to family and close friends.

“It’s very difficult,” he begins, when I ask him about how he has coped the past year. “I’m alone in this house. The house has many rooms upstairs but no one lives there and I’ve chosen to stay down here.”

A year before Moonyeen passed away, Singson took on the task of renovating a major part of the home’s ground floor and converting it into a home office-cum-quarters for Moonyeen and himself, with an en suite bath and home theater. Perhaps it was his way of coping with grief when her cancer returned with a vengeance in 2010.

“She got to see all this and enjoyed it for a while before she passed on,” he recalls.

Moonyeen is all over the home office and their private space. Her presence brightens up his desk and walls, in photographs of their time together. On his table is a picture of the two of them in a garden.

“That’s my favorite,” he says. “She looks so content, so happy.”

Turning to a large photo on the wall of Moonyeen dressed elegantly in a turban and long dress, he says with much fondness, “Look at her. Parang modelo, ano?”

Singson first set his sights on Moonyeen at the Central Bank office in 1958. In his eulogy to her, he described in detail that meeting, down to the dress  she wore. He then recounted how at some point in their courtship, he flew to Los Angeles, then to Ann Arbor, Michigan, for his graduate studies.

“She was staying in a place called Panorama City, which, unknown to me then, was so very far from the LA airport. I took a cab and spent what could be considered a fortune. Her hosts probably took pity on me and drove me to the airport,” he says, chuckling.

Memories of their countless trips together warm his heart, he says, and yet he often asks if he could have done more.

“Sometimes I ask myself—did I spend enough time with her? My greatest lesson after her loss is this—that you don’t realize the full extent of your love until she is gone forever.”

His voice trails off a bit when he shares how this December they should have marked their golden wedding anniversary together.

“You know, I’m much older than her [Singson is eight years older than his wife], so when she was first diagnosed of cancer back in July 11, 2003, I was really devastated. I always thought I would go ahead of her, but apparently God had other plans.”

Up to near the end of her illness, Moonyeen—who had such a graciousness and joy for life—enjoyed traveling with her family.

“My work took me away a lot of the time because I used to travel a lot,” says Singson. “It’s a good thing that she would often come with me during those years. There was a 10-year period when I counted and we had done 60 plus trips together.”

“But sometimes I look back on our days these last years, and remember how in the evenings she would stay up and watch her movies on TV while I would be watching the stock market because movies didn’t really interest me. By the time I would be done, she would be fast asleep. There are moments when I ask myself if it would have been better for me to have spent the time with her. If I had the chance to live our lives over, I would have spent more time with her doing the things we both loved.”

He relates an incident that happened  last month, which gave him a start but was at the same time comforting.

“I really don’t believe in these supernatural things, but something happened last month. I was watching CNBC and Bloomberg that evening and the stocks were doing very well, so I stayed up until 1 a.m., then  turned everything off. For some reason, I could not sleep. Then at 1:35 a.m. suddenly the TV went on! Ang lakas! But there was no image, only sounds of people talking. So I stood up and went to where the TV was. I said, ‘Ma, if that is you, please give me some more signs, I am not afraid. Why should I be afraid, you are my wife.’ So I turned it on and tried to see what channel it was on, and it was on Channel 89, which I’ve never used! It was a foreign channel. Before that, I never believed in these things, but it hasn’t happened again.”

Though his daughter visits almost every day, and the family gets together every Sunday for lunch, Singson says life alone can be difficult.

“There are days I want to go out and eat, but I don’t want to go out by myself. Those are some of the times when I really miss her. Mahirap ’yong wala kang kausap.”

In the first few months after her death whenever he saw or heard something interesting, his first instinct was to tell her, then he would remind himself that she was gone.

His friends rib him about getting a girlfriend, but “I tell them, look, I am 83. I don’t want to complicate my life anymore. And it is not easy to look for someone who can approximate the relationship you had. It’s not easy, so huwag na lang.”

Singson now fills his days with activities that are a balance between corporate and foundation work.

“I have three other offices outside but I’d really rather work here at home. And I can do everything from here, anyway.”

He keeps himself abreast of news and other events, watches NBA a lot and is looking forward to the forthcoming UAAP.

Singson also looks forward to taking a few more trips before the end of the year with one of his sons and his daughter—back to Japan and the US, places he and Moonyeen used to frequent.

Another project which keeps him busy are plans for rebuilding the chapel in Lingayen close to his childhood home. “I have many good memories of my childhood there, such as climbing the belfry and ringing the bell for the Americans after the Japanese occupation. I told my children that when I am done with that project, okay na, I can go and join Moonyeen.”

He pauses and recalls a moment between him and his wife a week before she passed on.

“Around July 3, she was in great pain and I was so worried. She said, ‘Pa, why do you look so worried? I’m not afraid. I had a good life, we had a good life. When we got married what was our goal? To raise our children well, so mission accomplished.’”

“Moonyeen accepted her fate with much peace,” says Singson. “Today I read in the papers that when you lose your spouse, your life is shortened. Siguro totoo. These years that I will be given after Moonyeen are a major bonus already.”