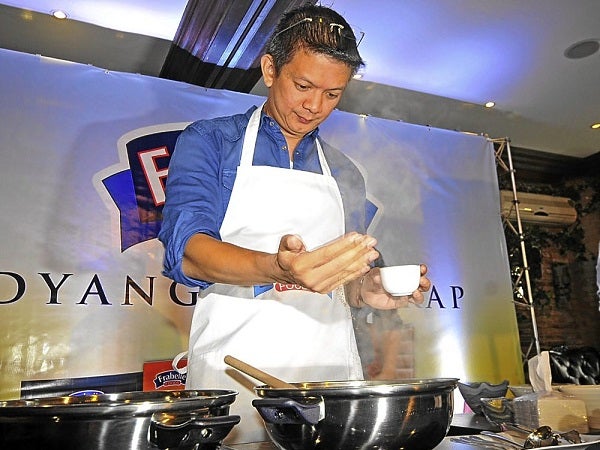 Sen. Chiz Escudero: ‘I can’t say it’s better now. But it’s much better than before’

As far as Sen. Francis “Chiz” Escudero can remember, there was no “Ghost” moment in the kitchen between him and former wife Christine Elizabeth Flores.

“I don’t remember that part,” said a laughing Escudero in a mix of English and Filipino, when asked if he and Flores shared happy, even passionate moments together while working in the kitchen. “There was no scenario like that in (the movie) `Ghost`, where, instead of molding a pot, we were cooking together.”

Despite having recently parted ways after a decade-long marriage, Escudero insisted he and Flores are still friends. He may have custody over their four-year-old fraternal twins Maria Cecilia and Joaquin Cruz, but his former wife is free to visit and spend time with the children anytime.

“We’re friends right now,” he said. “No, of course, I can’t say it’s better now. But it’s much better than before. It’s not perfect.”

Escudero said that before the annulment, he and Flores had a heart-to-heart talk about their kids’ future. Whatever went on between them, they decided to completely set them aside and focus on their children.

“We both reached an agreement that the kids are important,” he said. “From that day on, we agreed to live for them.”

The subject of cooking and his recent annulment came up when Escudero faced the media Thursday morning at Café 1771 in his new role as “brand ambassador” of Frabelle Foods. He even did a live cooking demo using Frabelle’s ground meat and sliced hotdogs to produce his version of sweet spaghetti.

Days earlier, Escudero, as guest co-host of Kris Aquino on her talk show “Kris TV,” publicly admitted that his union with Flores had already been annulled. The media-savvy senator signed up for a five-week stint as Aquino’s co-host. He also denied on TV that he and actress Heart Evangelista are dating.

“Wala (none),” he declared, when a journalist at the Frabelle launch teased him if he had already made Evangelista taste his food. “I didn’t say wala pa (none yet). I’m simply saying wala.”

He didn’t feel obliged to publicly discuss his annulment, but as a public figure, he knew that the matter wouldn’t remain private for long. After being initially taken aback by Aquino’s question, he decided to answer it once and for all.

“It’s not my habit to lie in so far as that is concerned,” he said. “I also owe it to the public because of my position, but that’s as far as it goes.”

It took him and his now former wife almost a year to work on their annulment. It was during this period that the two, in keeping with the law, tried to keep it a secret from the public. He also declined to reveal who the supposed erring party was, which gave them grounds to seek an annulment.

“Since the process of annulment is a private matter between families that might affect families, even court employees can be penalized should they reveal or talk about it,” said Escudero.

Surprisingly, after personally going through an annulment, Escudero still won’t support the passage of a divorce law in the Senate.

“I’d rather make present laws on annulment accessible and affordable. Not divorce per se,” he said.

If there’s anything other than politics and TV hosting which keeps him up and about these days, it’s cooking. Don’t let his slight frame deceive you. Honed by his mother Evie’s home-cooked meals, Escudero developed a taste for good food early on.

In a prepared video, Evie Escudero attested that her son knew his way around the kitchen even as a youngster, doing routine chores such as frying and sautéing to produce simple breakfast meals for the family.

A little over two years ago, he and his brother, brother-in-law and a neighbor decided to enroll at First Gourmet culinary school under chef Mats Loo. Escudero took his newly acquired culinary skills to the next level by later enrolling under chef Reggie Aspiras, also an Inquirer Lifestyle food columnist.

Aside from sweet spaghetti, Escudero knows how to cook such dishes as tinola, adobo, cochinillo and paella. His fellow senators have yet to sample his cooking.

“I promised (Sen.) Serge Osmeña to invite him over to taste my paella, but up to now, I have yet to deliver,” he said.

It was quite telling that he did all this without his then wife, and soon after their twins suffered from food poisoning while vacationing in the province. He made a vow to himself to be more involved and, if possible, hands-on when it comes to preparing his kids’ meals.

“We all decided to enroll because we wanted to see how we look wearing aprons,” he said in jest. “We liked what we saw and stayed on to finish the course.”

Apart from Escudero’s mass appeal, people at Frabelle deemed him the ideal endorser because of his “authenticity, sincerity” and passion for cooking.

Owned by businessman Francisco Tiu-Laurel and family, Frabelle began in the fishing business in 1966 with just one fishing boat. Today, it boasts of a fleet of 100 fishing vessels and business interests spanning such areas as shipbuilding, aquaculture, tuna canning and meat trading.

Less than a year after opening a meat-processing facility in Navotas, Frabelle received a so-called triple-A rating from the government that, said its top managers, attests to its efforts to produce world-class food products in a modern, sanitary environment.

Franny Tiu-Laurel, company president and the eldest in the Tiu-Laurel brood, tapped his good friend to be Frabelle’s endorser as the company expanded into the premium meat market. It didn’t take him long to convince Escudero.

“We’re very good friends and I know for a fact that he cooks,” said Tiu-Laurel. “I told him that we were expanding our product line. One time, I brought some meat products for him to sample, and he found them okay. It was basically a discussion among friends. I’m ashamed to say that he didn’t even have a talent fee. He did everything for free.”

Without missing a beat, Escudero declared, eliciting laughter among journalists: “That’s why it (endorsement deal) doesn’t reflect on my SALN.”

“I’ve done this before, also for friends,” he added, referring to past campaigns involving such products as Circulan, TechnoMarine and a brand of disposable razor and malunggay oil. “I do it to help friends and also to help us in so far as these products’ reach is concerned.”