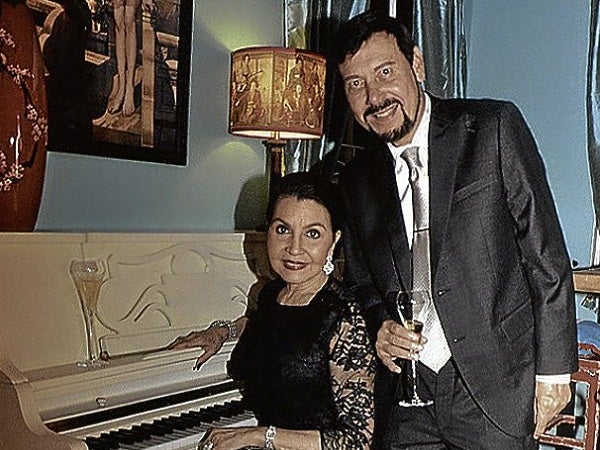 “Un voyage en Indochine” was the theme for a dinner organized by the Cebu chapter of La Chaine des Rotisseurs at La Maison Rose. As stated in previous articles, the locale was formerly the ancestral home of the prominent Velez family.

It now houses Alliance Française de Cebu which has incorporated a French gourmet restaurant into the facility. It will officially open by mid-July, so La Chaine was having a superb preview of what chefs Jean-Pierre Dojay and Adrien Guerrey have to offer.

“Bon soir a la Maison Rose,” chorused the uniformed girls who had been efficiently trained by Louis and Honeylet Thevenin, he being the director of Alliance Française de Cebu, and she the restaurant manager.

There to welcome all, beneath a silvery moon that drenched the back terrace with glow, were La Chaine’s Baili delegue for the Philippines Michel Lhuillier, honorary consul of France, and his wife Amparito Llamas Lhuillier, Baili of the Cebu chapter.

Asian chic, with accent on Indochina, was the requested attire. Amparito led the bevy of ladies in sheer gossamers or rustling silk brocades. The gentlemen were more casual, except Gabby Leyson who was in costume as an Oriental potentate. Tina Jordana, beside him, had dragons on her blue outfit.

Wines served throughout the evening were sponsored by M. Lhuillier Wine & Food. Prosecco Conegliano Valdobbiadene sparkled on champagne flutes, perfect with the slices of succulent rock lobster on fresh Basil leaves. Most everyone kept dipping into a basket that held Burgundy puffs stuffed with oozing hot goat cheese.

“I’ll forget my diet,” resolved Michel, who lately has shed enough pounds to be back into his varsity basketball figure. There was more to come from the chefs who had prepared a sit down dinner for the 45 guests. Some slipped into the dining area before the sign was given, to take on the aura of subdued splendor the interiors offered.

Pianist Romeo Geraldizo tinkled away “La Vie en Rose,” and a whole repertoire of favorite tunes for the duration of the entire repast and more. Virginie Sentfle explained the menu, and with the aid of Delphine de Lorme and Honeylet served the wines chosen to match the various dishes.

Michel and Amparito took their places with their son, Charles Lhuillier, and Louis T, VIP guests Robert Laguardia, Peter Gassner and Jerome Siy. They were joined by Brendan Mahoney, executive chef and food/beverage director at the Cebu Marriott, and Eve Collier.

The wine pairing had been carefully done, thus it was an Alsace Sylvaner poured with the cold soup of zucchini and cream of Grueyere. The Chablis Premier Cru went with the shellfish ravioli, and a sweetish late harvest Gewurztraiminer accompanied the foie gras wrapped in filo pastry plus a bit of greens.

“Lechon a la Française” on the printed menu tickled everyone’s curiosity. Yes, it was the traditional Cebu roast piglet, skin included, simmered for over six hours on the slowest of fires, and served on a little ceramic cazoulet. For this, it was the red wine Gigondas.

“Trou Rormand” on the menu meant a tasty shot of Vodka Zubowka with a scoop of calamansi sorbet floating on it. After that, everyone was ready for a wide assortment of French cheeses offered on carts. To go with them was no less than a St. Emilion Premier Cru.

Later, the carts offered a selection of desserts that had everyone exulting with superlatives. “Tonight has been truly a labor of love,” said Michel, in a laudatory speech that had everyone clamoring for the chefs to come out, emerge, take several bows.