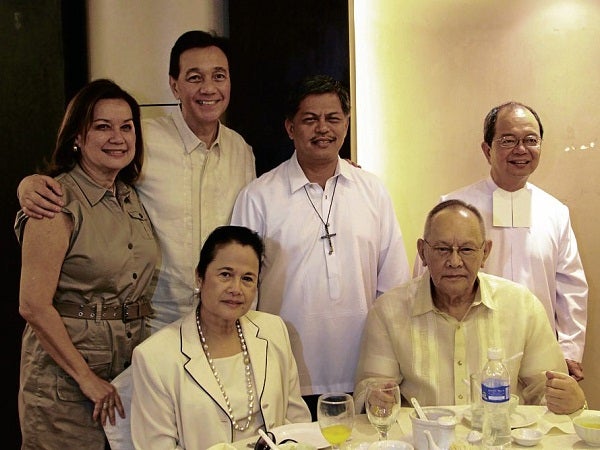 Billionaire-philanthropist Eduardo “Danding” Cojuangco Jr. plunked down over P45 million so that 2,000 public school teachers in Tarlac could get a diploma from the University of St. La Salle in Bacolod.

As a proof of his foundation’s endeavor, the first batch of 789 Tarlaqueño graduates in the Master of Arts Teaching Program belted out the “Animo La Salle” anthem with pride at the end of the graduation ceremonies.

Cojuangco told the Inquirer, “A La Salle diploma is not just a diploma. When you hear the locals sing the alma mater song nakakatayo ng balahibo!”

The Eduardo Cojuangco Foundation (ECF), of which Danding is chairman, has launched the Flagships to Reach Educational Excellence, or Project Free. Under it, Tarlac public school teachers can pursue their masteral and doctorate degrees, under a program designed by the University of St. La Salle Bacolod. Tarlac State University was the host campus.

Among them was the topnotcher Jesus del Rosario, 25, who taught math and English in a public elementary school and worked as a part-time clerk. The sole breadwinner in the family, he was apprehensive that if he took up the masters’ program, it would be an added responsibility aside from his teaching and work.

Yet, Del Rosario managed his time by studying his graduate school lessons on Friday so that he would be prepared for the Saturday classes. “I took up masters for the benefit of my students and for the promotion. I want to be a master teacher.”

The hard work paid off. He said the program helped improve his grammar and sentence construction. He applied teaching techniques taught at the program such as engaging students in games or group activities.

He said his students have expressed their appreciation. “I learned the La Sallian adage that you just don’t teach, you guide, he said. “The teacher is like a moral compass.” Del Rosario graduated with a grade of 1.12.

Tarlac State University president Priscilla Viuya said it’s the first time a scholarship of this magnitude was given to a province. Project Free has provided opportunities for teachers from tuition to assistance.

She admitted there was the initial resistance from the teachers. “They were afraid that it would be too big a thing for them. It was surrealistic that they could avail (themselves) of a free masters’ degree program all the way to doctorate.”

On his assessment of the state of the public school teachers, Education Secretary Armin Luistro said, “I’ve been pushing for sustaining the retooling of teachers—to get them enrolled in a regional university, public or state university—that allows them to get either a certificate or degree program. The small thematic workshops and seminars don’t transform the workforce.”

Luistro said the Project Free program has become a model wherein a state university can work with a local university or college to run graduate and doctorate programs for public school teachers within their region instead of having teachers come to Manila.

“In the past, we would do by batches, like 10 percent of the teaching force going through a program. That doesn’t get much support. When the teachers come back, they are the only group who knows the new stuff. This project is important because we have a majority of the teaching force in the same page at the same time. That is critical for reform to be sustainable.”

It all began when Cojuangco’s wife, Gretchen, was visiting her home province Negros Occidental. She was appalled to hear the poor communication skills of teachers in a school near their farm in Pontevedra.

“I felt sorry for them. Their speech was so bad,” she recalled, “I asked a friend, a Jesuit, if there was a way we could help the teachers. How can they teach the children with the way they are speaking?”

She broached the idea to Cojuangco, who saw the bigger picture. Instead of just helping the teachers in the neighborhood, why not do it on a bigger scale?

“One of the solutions in solving the plight of the poor is through education,” Cojuangco told the Inquirer. “But if your teachers don’t have the knowledge of what they should impart to their students, then it doesn’t do much good. I started my advocacy: Train teachers so you get good students. Hopefully, other provinces can copy the system and then it goes to the whole country. That’s the concept.”

Cojuangco spoke with Bro. Gus Boquer, then president of the University of St. La Salle Bacolod, who organized the higher education programs for public school teachers of the fourth district of Negros Occidental, under the turf of their son, then Rep. Carlos Cojuangco, who later became the mayor of Pontevedra.

After Project Free, when the Department of Education (DepEd) conducted national achievement tests in Bacolod, results revealed a significant increase in the students’ scores. “Many teachers for their own good also got promoted by the DepEd because of their masteral and doctorate degrees. So there is a need to go back and fill up the gap because a lot got promoted,” said Cojuangco.

He has derived a lot of psychic income from helping others. “It’s a great feeling to see the enthusiasm of the teachers. I’m really blessed by my Creator. I’ve been given the privilege to do this for my fellowmen. Not everybody is given the chance.”

Gretchen added that it was heartwarming that during graduation day, they came up to her to express their gratitude, “’Day, salamat gid.”

Further, Cojuangco provided scholarships to 120 policemen in Negros. “They couldn’t get promoted to the rank of major if there was no masteral degree. They said it would cost them too much for a masters’ program,” he said. The University of St. La Salle Bacolod designed a program for the police who eventually held their graduation in the gym.

Cojuangco’s affiliation with the Christian Brothers dates back to his kindergarten days in 1940 under Juan Medrano, the first lay Filipino teacher at the original La Salle school in Taft Ave., Malate, Manila. When Cojuangco was in Grade 1, World War II interrupted his studies. He would be transferring schools, staying for only three months.

“My father kept on running away,” Danding said. “He didn’t want to serve the Japanese. He was elected governor in 1941. Hinahanap siya. Lipat kami nang lipat. My basics weren’t really good. My true education was my four years of high school in La Salle.”

Joaquin “Quinito” Henson said Cojuangco has been one of La Salle system’s most generous benefactors. “He has provided professorial chairs, supported educational programs, put up scholarships and recently sponsored the P60-million retirement home for the Christian Brothers in Dasmariñas, Cavite. La Salle has cited him for his major contributions to education and La Salle. His love for sports has also brought him close to the basketball team of La Salle.”

Tarlac has been fortunate that the Project Free grant was open to the whole province instead of just a district. It was Cojuangco’s way of returning the support that the Tarlaqueños had given him when he was governor and congressman.

However, after the pilot Project Free, some scholars who acquired their degrees left for greener pastures. “Kawawa naman ang bayan,” said Cojuangco. He pointed out that Project Free in Tarlac has set conditions. “If you don’t finish, then you pay. If you finish, then you have no expense but we also want you to serve in the Philippines at least three years.”

Cojuangco plans to replicate the program in the Fifth District of Pangasinan where his son Mark is congressman. “I’m hoping I can have enough money to spend. It’s not easy.”

We brought up the subject of him being in the Forbes list of the richest men in the country.

He said lightheartedly that he just couldn’t spend what was mentioned in the Forbes list.

“Mr Cojuangco has many priorities,” said Henson, managing director of the ECF.

Asked how he got involved in philanthropy, Cojuangco replied, “I don’t call it philanthropy or charity.”

“I just want to help if I can. Kung hindi naman, sorry,” said Cojuangco. The billionaire has always had a soft spot for the poor. “I started the concept by trying to help people. We started sari-sari stores. Kami-kami lang. There was no direction or focus. Kumbaga oido lang lahat until we got Quinito (Henson) to attend to it. There’s no substitute for the satisfaction of being of help to your fellow man. It’s an upliftment.”

Aside from education and microfinance, Cojuangco’s philanthropy involves building churches for the community.

Even before he became chairman of San Miguel, Cojuangco was given a bespoke gold medal of St. Michael which he keeps in his pocket.

Beyond giving back, Cojuangco believes in noblesse oblige. “Those that were given more by our Creator have an obligation to give more to other people.”

“I’ve noticed that if you try to hold on to money, that much, it is harder to come by. But if you openly help your fellow men, somehow it comes back. It compensates itself. Marunong ‘yung kaibigan ko sa taas,” Cojuangco said with a chuckle.