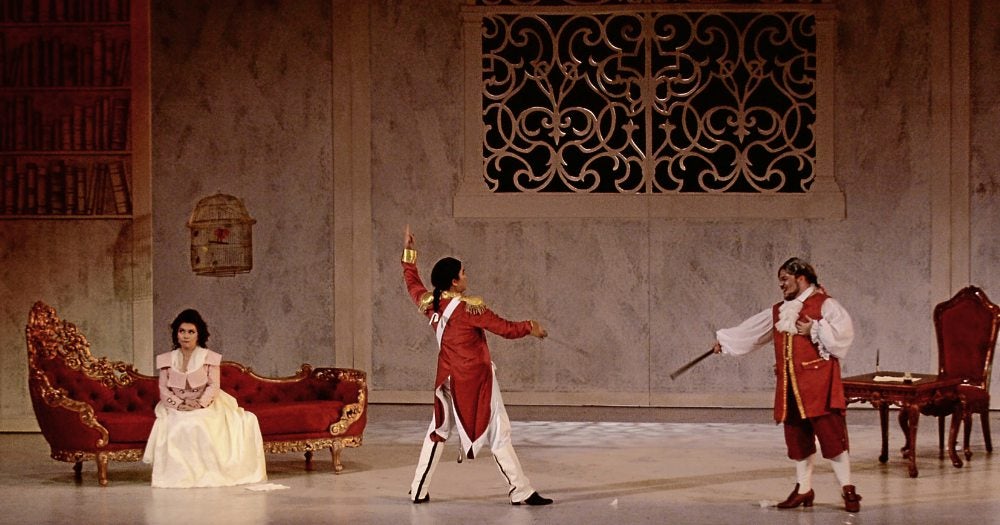 ‘Barber of Seville’: A delightful production

The gala of “The Barber of Seville” had the audience—even first-timers to the opera—delighted.

Rarely performed in the Philippines, the opera buffa (comic opera) was the main attraction. However, it had all the ingredients that made it a pleasure to watch—a superb cast of local and foreign artists; an Italian director who made the opera accessible to an audience sporadically exposed to the art; an Italian conductor who remained true to composer Gioacchino Rossini’s intentions; and a cavernous CCP Main Theater made friendly with the modern sets by an Italian team and mood lighting by designer Joaquin José Aranda.

The audience understood the Italian dialogue, thanks to the English subtitles above the stage.

“The Barber of Seville” is about frustrated lovers calculating a way to block an overly protective guardian with the help of a barber.

Mario Cassi as Figaro, the barber, was full-voiced and articulate. His sense of the character was energetic and assertive, human and not caricaturish.

Andrew Fernando was an amusing Basilio with a bearish voice.

Antonio Petris’ direction clarified the details of the convoluted plot and the emotions of the characters. The humor was never forced and the recitatives were executed with brio.

Former CCP Philharmonic Orchestra conductor Ruggiero Barbieri flew to Manila to conduct a small but responsive orchestra with a buoyant touch and a pleasing sense of phrase.

The real feat here is how Zenaida Tantoco, president of Rustan’s Commercial Corporation and Stores Specialists Inc., is proving that the support of corporations and friends can help keep the culture scene alive—and at a high level of quality.

The opera ran some three hours long. During intermission, the audience on the orchestra level were given stubs for Starbucks coffee and Gonuts Donuts, while the VIPs in the boxes had wine and pass-around canapés.

Close to midnight, heavy cocktails were served at the Silanganan restaurant. The guests were far from bleary-eyed as they talked about the brilliant production.

For the gala night, the audience was willing to spend P5,000 to watch a well-paced show for the sake of charity.