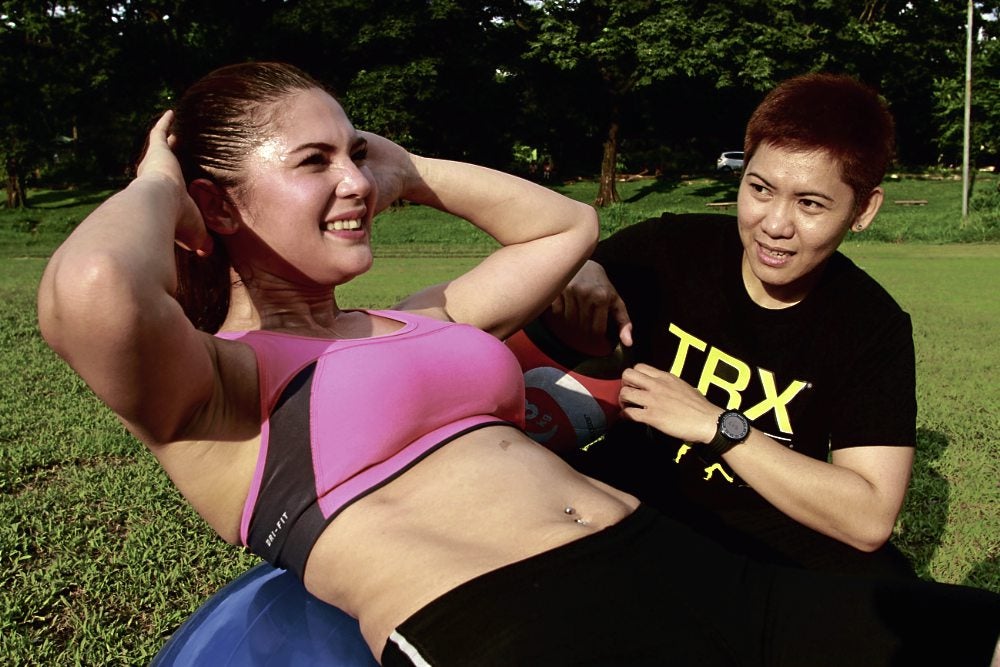 Personal trainer Keena Mabiog challenges Vina by making her do crunches on the stability ball.

How Vina Morales got her washboard abs back–at home

Singer-actress Vina Morales auditioned for “Rock of Ages,” hoping to get a lead role. When she was cast as Sherrie, the female protagonist-waitress-singer, Vina gave her trainer, Keena Mabiog, less than three months to get her washboard abs back.

Reducing bodyfat percentage through consistent cardiovascular workouts and core training is the way to chiseled abs. Vina’s program consisted of bodyweight exercises with the aid of portable exercise equipment.

After giving birth to Seana, now three years old, Vina regained her figure. Although she did soap operas, they were safe roles, like playing a young mother, which didn’t require much in the looks department.

However, in Atlantis Production’s “Rock of Ages,” her first ever theater role, Vina was challenged. There were still some postnatal fats covering her stomach muscles.

“My role was a stripper. If you’re chubby, it won’t look nice. I had to prepare. I was careful with my food intake—mostly brown rice, salad, egg and sweet potato. But if you don’t complement the diet with a strong workout, the weight loss won’t be fast,” she said.

Vina has tried all kinds of activities such as yoga, dancing, badminton and running. “I get bored easily,” she said.

Her body type is mesomorphic, a naturally athletic build. Although she is blessed with a sculpted midsection, she tends to bulk up easily when working with free weights.

“I wanted to get ripped and concentrate on core training, but I didn’t want any more muscles on my arms,” said the singer-actress.

Vina and her trainer would work out in the singer’s home. Mabiog said that one doesn’t need the treadmill or a stationary bike and free weights to get in shape. For the instant home gym, the trainer would bring portable fitness equipment—a stepper, a sticky mat, an exercise ball and a TRX suspension kit.

Plyometric exercises are specific, high-intensity training skills used to build up strength and speed such as hops, jumps and bounding movements. They thicken the ligaments and tendons to prepare the body for greater intensity and more ballistic movements.

Mabiog was impressed with her celebrity client. Vina was well-conditioned and showed high levels of leg and body strength.

The step exercise involves pacing up and down a riser. The up-and-down moves fire up the hips, gluteal muscles and hamstrings, while the side movements engage the inner and outer thighs.

The Journal of Medicine and Science in Sports and Exercise says that step aerobics boosts oxygen use and burns calories, thereby promoting weight loss.

Certain choreographed exercises improve coordination. When the individual gazes ahead instead of looking down, the posture is improved and body awareness increases.

“She wanted to build up endurance for her singing and acting,” said Mabiog.

To strengthen the core, Mabiog provided suspended workout and exercises on the stability ball.

The stability ball, or Swiss ball, is a soft, wide, inflated, puncture-resistant sphere. Unlike working out on a solid horizontal surface, such as a bench or a floor, the body has to work harder to maintain balance on the instability of the ball. Hence, it uses more muscles that get stronger in due course.

The exercise ball targets core muscles—the abdomen, back and pelvis.

Suspension training, or suspend workouts, are exercises using body weight as resistance while yanking on nylon straps hitched to an overhead spot.

The resistance is regulated by transferring the weight or changing the angle of the body from the anchor point. By increasing instability in the strength exercises, the workout fires up not only the major muscle groups, but also the core and other muscles that stabilize the big muscles.

“I find this difficult because you have to balance while engaging the core and the arms,” said Vina.

Mabiog is a certified trainer for TRX, a brand that is popular for its travel-easy and user-friendly setup, and the exercises can be adjusted to any age and fitness level.

“Because of the intense training, the fats were burned so her hidden muscles came out,” said Mabiog.

Vina said she didn’t weigh or measure herself. She estimated that she lost 10 lb and is a trim 115 lb for her 5’4” frame.

“Keena pushes me. If I work out by myself in the gym, I get slack,” she said. “It’s also different when you set a time limit. ‘Rock of Ages’ motivated me.”

Vina added that accomplishing Mabiog’s program gave her the confidence to perform well.

What readers can learn from Vina is that there’s no excuse to avoid exercise. There’s the convenience of home fitness, which one can easily work into a busy schedule.

Working out at home provides Vina privacy and support from the family. “I’d get red after exercising for two hours. My mom would watch me and she’d laugh and clap. I’d tell her, ‘Mom, papayat ang bibig mo.’ Seana would wipe my sweat.”