Why Cebu is queen | Inquirer Lifestyle Why Cebu is queen Running down the center of long and slender Cebu Island is a saw-toothed spine of mountains that drops directly into the sea in some places. In other places, the mountains move away from the sea, forming narrow, coastal flatlands where most of the population lives.

Forced by geography to spend their entire lives between mountain and sea, this geographic imperative has had much influence on defining the Cebuano outlook and the Cebuano home. From anywhere on the island, Cebuanos can stand firmly on their mountains or shores, look outward and gaze past the sea, toward islands on the horizon.

Maybe it is from living on an island that we can easily isolate ourselves, band together to identify with a common viewpoint and to share a lifestyle that we fiercely consider our own.

Homogeneous people as we islander Cebuanos are, we easily recognize who is of our brethren or not.

The Manileño has emerged as the object of the gentle but long-standing rivalry between him and the Cebuano. The rivalry takes many forms, from the banter of friendly teasing to one-upsmanship, going all the way to outright competition.

A perpetual area of competition is the supremacy of Manila over Cebu, considered the Queen City of the South.

Local traditions, crafts and the arts flourished, adding distinct personality and local color to the rapidly improving Cebuano lifestyle fueled by the continuing prosperity of the province and its people. 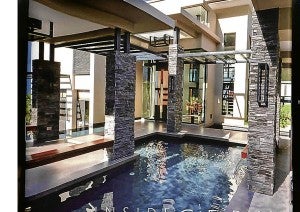 Take a look at what Cebuanos have been achieving for generations. This Queen certainly uses her strengths and knows how to get maximum results.

The houses in this book, in architectural styles so diverse, ranging from Filipino Modern, 21st-century or 1960s modern, Classical, French, or Italian Revival, opulent or minimalist, are all houses that have that Cebuano vibe.

All homes relate to both mountain and sea in true Cebuano fashion. All have mountaintop vistas of the sea and of the islands beyond. All have either covered porches or large verandahs, with expansive terraces that bring everyday life into the outdoors.

All are products of that traditional, sensitive Cebuano craftsmanship—obvious in the high-quality architecture; the perfection of construction finishing; the superb, hand-wrought craftsman accessories; and, of course, the locally produced furniture that is at the forefront of media hype these days.

The houses may appear as generic Philippine to the uninitiated eye. However, to those who know, these are Cebuano houses attuned to the laidback local lifestyle, built to take advantage of the mountains, magnificent views, and sea breezes only found on Cebu island.

Despite each house manifesting its owner’s personality, they all demonstrate the Cebuano’s being as close as can be, or even appearing to grow out of, the mountains and sea.

The principal difference between the houses in this book and houses of fashionable Manila is the openness of the Cebuano house, its connection to its garden and to the view beyond, an intimate connection to nature not possible in congested urban Manila.

Not hemmed in by boundaries of tight city lots as many Manila houses are, the Cebuano house is wide open, generously built for the islander lifestyle of the Filipino South. The Cebuano house is, indeed, different.

A lot of local color is gone from Cebu these days. Globalization, thanks to nationwide Tagalog television from Manila, has homogenized Philippine culture.

Many Filipinos are no longer aware of the importance of maintaining the cultural differences that make each region and its people distinct from another.

It amazes us to see how much local color there still remains in many places, although ever so subtly these days.

Cebu has managed so far to keep so much of its tradition within its island confines. Many are recorded visually and subliminally in this book.

For a Cebuano like me, seeing local color shine through in this book and the places it portrays is a triumph, assuring me that my roots will always be where they should be and where I want them to be.

The challenge for us Cebuanos these days is to make our Filipino brothers see that our light always shines brightly. We must keep it from going dim.

Genvi Development Corporation, developers of the prestigious Monterrazas de Cebu, the city’s only mixed-use township, advocates the Cebuano lifestyle and is the major sponsor of the publication.

“Inside Cebu” is published by Zee Publications Inc. The book will be available at Fully Booked at High Street, Global City, starting Aug. 21. Visit www.zeelifestylecdbu.com