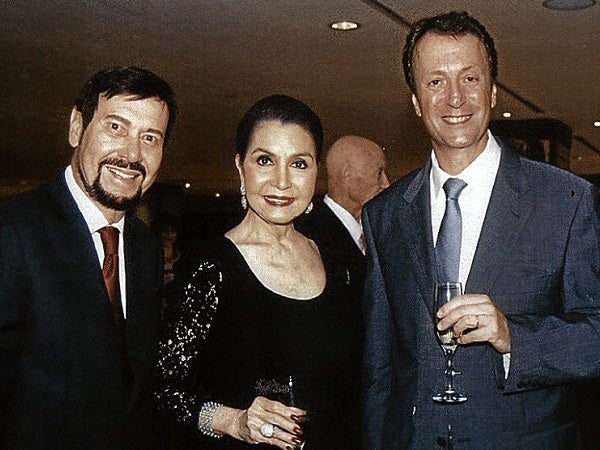 Michel Lhuillier, honorary consul of France in the Visayas, and Amparito Llamas Lhuillier hosted a grand celebration for France’s National Day at the ballroom of the Marco Polo Plaza Hotel.

In Cebu for the occasion was French Ambassador Gilles Garachon, who had also visited Cebu last May. It was another occasion for him to meet the French community here, and renew acquaintances with Cebuano friends.

Also at the presidential table were Marco Polo’s general manager Hans Hauri with his wife Bo Hauri, plus Glenn and Honey Loop, she being a member of the board of directors of Alliance Française de Cebu (AFC).

From the AFC were director Louis Thevenin with his wife Honeylet Samia Thevenin, deputy director Juliette Blouin, project manager Mary Ann Farrugia with Alexander Farrugia, and the faculty of the AFC.

The Marco Polo ballroom was decorated with numerous French tricolor banners of red, white and blue hanging from the ceiling. One whole wall had a mural of the 1789 storming of the Bastille fortress in Paris (among those liberated was the Marquis de Sade) and the emblematic words: “Liberte, Egalite, Fraternite.”

First to speak was Consul Michel Lhuillier who complimented Ambassador Garachon for his presence and his support for AFC of which Michel is president. He acknowledged the beautiful décor of the hall and thanked Hans Hauri for it.

Consul Lhuillier announced that AFC is now in its new location at LA Maison Rose. That is also the name of a French gourmet restaurant that opened last Aug. 4, with two French chefs.

“It’s wonderful to be here,” said Ambassador Garachon. “First of all, it is more fun in Cebu! We should have the embassy here.” He expressed his gratitude to AFC’s Louis Thevenin and Juliette Blouin for their dedication to the cause of diffusing French language and culture.

Gov. Gwendolyn Garcia amused everyone with an anecdote in her speech. Did she wink when she said that the first time Cebuanos encounter French people was in 1521? That’s when Magellan came to Cebu.

“There were 15 Frenchmen in the crew,” said Governor Gwen, who went on to say that after Magellan was killed (imagine slaying the first tourist) the Spanish expedition led by Juan Sebastian de El Cano returned to Spain minus the 15 Frenchmen who decided to remain in Cebu. “That’s why we’re a bit French.”

Everyone stood for the national anthems, sung a capella. Yemma Senining rendered the complete version of France’s “La Marseillesse” in perfectly enunciated French. Her sister Rina Senining sang the Philippine anthem in Tagalog. They were applauded.

Dinner was served buffet-style, directly supervised by the hotel’s food and beverage director Stephan Wieprich, and the new executive chef Karl Beter who personally churned the Steak Tartare with a dozen condiments. The French specialty “Coq ay Vin” rated superlatives, as did the Canadian oysters, French cheeses galore, and an array of tempting desserts.

Entertainment was provided by the Voices of Praise with the Senining sisters. They presented a lively repertoire. So did the scholars of the Amparito Llamas Lhuillier Educational Foundation, which focuses on the performing arts at the University of San José Recoletos.

Mila Espina, who handles the foundation, made sure the songs were well-chosen, so that when they sang Cole Porter’s “C’est Magnifique,” it just about summed up the marvelous celebration. Mila had also brought a former scholar, Anna Fegi, who has become an international singing sensation. She brought the house down with her take on Barbra Streisand hits.

Dancing followed, started by Michel and Amparito with Ambassador Garachon joining in, as well as Margie Lhuillier, Greg and Agnes Huettel, Detlef and May Ernst, Bob and Susie Oliver, Glenn and Honey Loop, Mila Demecillo and Baby Schaap.

A new session of French language lessons opened at AFC on Aug. 6 with schedules to suit everyone’s time tables. “More than anything else,” said Louis Thevenin, “We offer classes online, specially to prepare those who’d like to work in the French speaking areas of Canada.”

They need to speak, read and write in French, and AFC has online students from all over the Philippines. Recently, Alliance Française de Cebu produced 160 competent students who successfully passed the DELF exams.

That stands for “Diploma d’etude en Langue Francaise.” The diploma is recognized by France’s Ministry of Education. AFC will organize the next DELF session in November.