‘We Were Ivatan in an Earlier Life’ | Inquirer Lifestyle ❮ ❯ 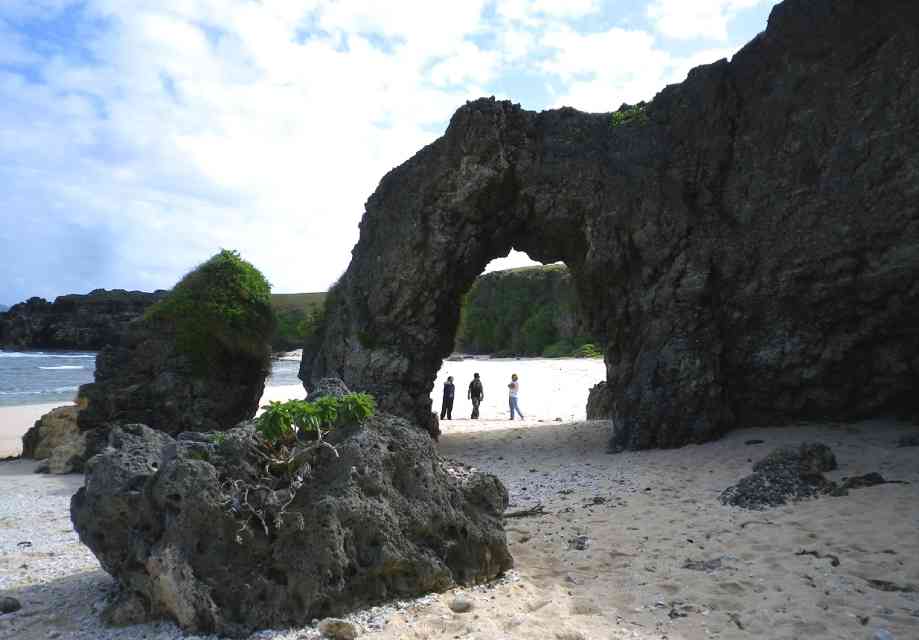 One of the most familiar and frequented places on Sabtang: the stone arch at Nakabuang beach, ideal for picnics, overnight camping and aquatic exploration

‘We Were Ivatan in an Earlier Life’

BATANES has gained iconic status among local travelers and a growing number of foreign tourists mainly because of its fascinating landscapes and the friendliness of the Ivatan people.

The list of attractions is long. Verdant hills and forested mountains for trekkers. Cliffs and crags, at the foot of which the booming surf lashes dramatically. Unpolluted stretches of sandy coast. Excellent and inexpensive seafood and other delicacies prepared the Ivatan way. Welcoming and helpful locals who speak other languages aside from Ivatan. Variable weather conditions to suit a range of moods. Old stonehouses with thick thatched roofs which are like no other in the country. Local arts, crafts and products: the vakul headgear fashioned from the vuyavuy palm, the potent palek wine from sugar cane, garlic, marinated dibang (flying fish) you could bring back home, among others. Then there’s the exhilaration of crossing the rough channel between Batan and Sabtang, or sailing all the way up to Itbayat…

I had a special reason for visiting Batanes again last January. My son Diego was home from Vancouver for the Christmas holidays. For years I had been promising him a Batanes trip. On the Internet, I booked five days at Shanedel’s Inn and Café. There were so many places to choose from, but I picked Shanedel’s because it promised a view overlooking Basco Bay with the advantage of being within the poblacion. It had Wifi and was reasonably priced. To prepare for the trip, I bought a compact digital camera and a pair of walking shoes.

Day 1. It was late morning when we arrived in Basco by Seair. Shanedel’s proprietress, Del Millan – who tools around on a motorbike running errands and bringing her two grandchildren to school – gave us a warm welcome and an initial lunch of Ivatan cuisine. We feasted on venes (dried gabi leaves, cooked with coconut milk, similar to the Bicol laing), uvud (pith of banana stalk), wild fern salad, grilled flying fish, roast pork, and garlic rice yellowed with turmeric.

I could not remember how Basco used to look like, except for that panoramic view of the town when I stood atop the Naidi Hills years ago. My son and I spent the first afternoon orienting ourselves on the place. I tried in vain to recall where Mama Lily’s Inn was. For decades, until the early ’90s, it was probably the only guest house in Batanes. I think it only had two rooms, and was known for having the highly prized and rather expensive coconut crabs on its menu. That was where I had stayed during my first visit. It was somewhere in the middle of town. I asked some youngsters if they could point out the place, but none of them had heard about Mama Lily’s.

Day 2. We toured the main island of Batan. Our tour guide was Chris Cataluña, who drove his rugged van right up to the mountain trails circling the island. He was from the port town of Ivana, where his father was vice mayor. We took the usual route from Basco: southward along the winding and picturesque cliffside highway with the sea below us, towards Mahatao and Ivana, then to the rolling pasture hills of Vayang with a spectacular view of hedgerows, the sea and other islands. After lunch, we proceeded to Valugan Bay, whose shore is covered with big and small boulders, smooth, reddish, grayish or black, said to have been spewed out by Mt. Iraya centuries ago.

Day 3. To catch the falowa boat for Sabtang, we had to leave Basco before dawn. It was raining hard. As daylight broke, we could not even see the island. We decided to try again the next day. We went around Batan island to see places we had not been to yet. Cold and hungry, we went to the Honesty Coffee Shop at Ivana, owned by Joe and Elena Gabilo, but the couple was nowhere to be seen. No one was minding the store. But the poster explained why: Self service only. Get what you need. Please pay (for) whatever you get. If you have no change, knock at the next door. If no one answers, sorry, so you give more than the price. May your tribe increase. Remember – HONESTY IS THE BEST POLICY. Thank you and have a happy & nice day! Dios Mamahes!

Next stop was Valay ni Dakay, the oldest house in Batanes, built in 1887. The present occupant is Floresida Estrella, who is almost 90 years old. She gamely posed for photos. Being the most photographed woman in Batanes, it was all in a day’s work for her.

Day 4. The weather finally cleared, and at last we made the rough crossing to Sabtang, reassured beforehand by the reputation of the skillful Ivatan navigators. I had never been to Sabtang, and it was beyond expectations. In another rented old van, with Chris still our guide, we struggled up the dirt trails, a few good stretches of road, and were rewarded with some of the most scenic landscapes in Batanes or anywhere in the world. The high point was Chavayan, a one-street village of old, intact stone houses, nestled between mountains and shore. In this village lives Marcelo Hostalleros, the oldest man in Batanes. He turned 104 in January this year. He was mending a fishnet when we went to his house.

Next stop was Nakabuang Beach for the stone arch, followed by lunch at the Elisterio house right next to Sabtang’s stately gray lighthouse. We were served a sumptuous meal of seaweed soup, sweet and sour snapper, lobster, chicken adobo, classic pinakbet and steamed rice.

Day 5. Departure for Manila, but the weather was inclement. All the passengers were at the airport early, wondering if the Seair plane would arrive. It never did. Wind speed in Basco was 25 knots, a no-go for the turboprop. We were not very upset, my son and I. If you had no urgent commitment in Manila, you didn’t mind being stranded in Batanes. We spent the extra day going around town, picking up a few souvenirs, and trying out the other eating places serving traditional Ivatan cuisine.

Day 6. The wind had died down, the rains let up, the Dornier arrived, and we were on our way back to Manila.

My son comes home again this December. If he wishes, we could return to Batanes. The distant isle of Itbayat beckons. •