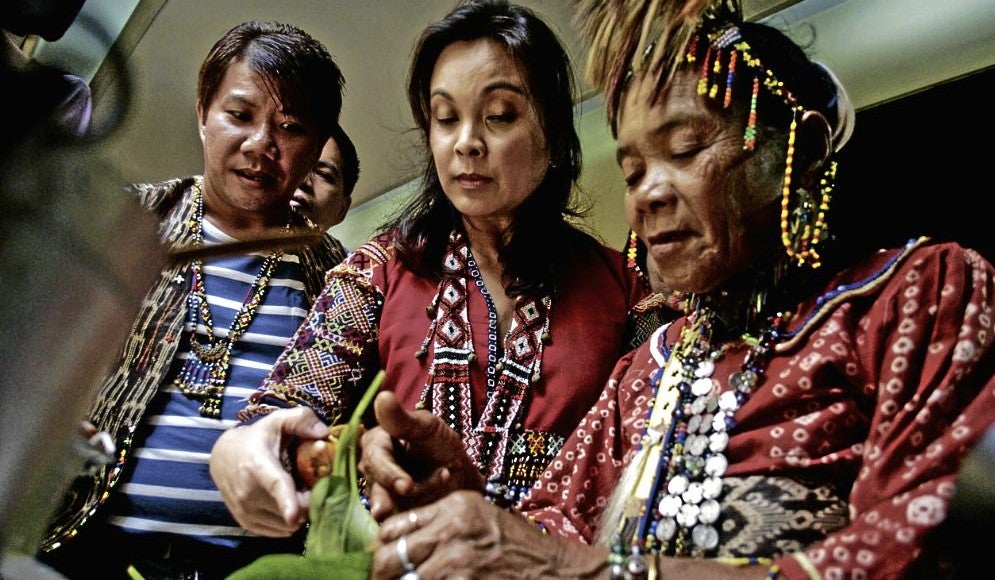 When she started working with members of the Bagobo tribe at the foothills of Mt. Apo in Davao del Sur 13 years ago, cultural worker, researcher and former Department of Tourism Region 11 director Sonja Villarica Garcia recalled that almost none of the indigenous people she dealt with were wearing their tribal costumes.

As a consultant of Sen. Loren Legarda, Senate chairperson of the committee on cultural communities, Garcia lectured on “Philippine Traditional Textiles and Indigenous Knowledge” at the National Museum’s Queen Sofia Hall.

Named after the Spanish queen, who visited the museum a month ago upon Legarda’s invitation, Queen Sofia Hall houses “Hibla ng Lahing Filipino: The Artistry of Philippine Textiles,” one of the senator’s pet projects, a permanent collection of photographs of indigenous Filipinos and actual textiles and clothes they weave and wear.

“If the Bagobos did wear their costumes, they usually wore them once or twice a year during special events,” said Garcia. “Those who did occasionally wear them would unwittingly stylize their traditional wear by combining them with articles of clothing from other tribes.”

Because of constant assimilation, they would wear, for instance, jackets made of T’nalak fashioned by another tribe based in Mt. Matutum, near scenic Lake Sebu, several mountains away. And due to the area’s rugged topography, the whole of Mt. Apo alone is home to no less than 16 tribes. Assimilation is simply inevitable, said Garcia.

Worse, a growing number of youngsters simply didn’t care or know any better, and were wearing clothes typical Filipinos would wear in the cities.

“But now, with a tribal hall they could call their own, they regularly wear their tribal wear every weekend while accepting visitors,” said Garcia, vice chair of the National Commission of Culture and the Arts (NCCA). “They now also showcase their tribal arts and crafts to other people, whereas before they never did.”

The construction of a tribal hall, which the villagers insisted on and oversaw themselves, has enabled them to invite tourists, even foreigners, to visit Bagobos as they provide them with much-needed cultural immersions Garcia dubbed as “voluntourism.”

Tourism, which includes selling native handicrafts like woven textiles, has become the Bagobos’ supplementary source of income to their primary one, which is farming.

“Everything that we did and plan to do must come from the people themselves,” said Garcia. “Unless the community wants it, we can’t have it. Doing it slowly and with their involvement allow the community to embrace the program.”

Since preservation of indigenous peoples’ culture is perhaps low in the list of priorities of a cash-strapped national government, the program has limited and constantly evolving sources of funding. To jumpstart the project, for instance, Legarda drew from her Countrywide Development Fund.

Legarda and Garcia have convinced the NCCA, Department of Agriculture, Department of Trade and Industry, Department of Social Welfare and Development, Technical Education and Skills Development Authority, and even the Bureau of Fisheries and Aquatic Resources, among others, to lend their support.

It’s proving to be a win-win situation for both these indigenous people and the tourists who visit them. The Bagobos charge a small fee in exchange for sharing their “lifescape” with lowlanders and perhaps fellow indigenous people from other parts of the country.

“For their part, I always encourage tourists, especially Filipinos, not to merely take photos during their stay,” said Garcia. “Talk to them and you’re bound to learn something new. That’s the best thing about traveling.”

The tribal hall with clean restrooms functions as one big, communal hotel where tourists could lay down their blankets and sleeping mats at night. The Bagobos have also trained a kitchen staff in sanitary ways of preparing Bagobo dishes for their guests.

“Designers and those who simply admire their textiles are welcome to order,” said Garcia, who was wearing what she described as a beaded “neo” Bagobo jacket in black and white. “But they shouldn’t expect these people to go totally beyond what they have been doing for generations.”

They can probably accommodate minor design flourishes, but they can’t be expected to produce anything close to, say, patterns typical of Italian and French fabrics. That’s not who they are. And since everything is woven manually, it takes some time for them to finish orders.

“One of NCCA’s tasks is to try to revive the purity of a cultural community,” she said. “Intrinsic to the Bagobo creativity is their attraction to garish, bright and shiny things. They incorporate anything, from seeds, sequins to baubles, in their creations.”

It’s also important for these communities, Garcia added, to find regular markets for their wares. It’s the only way to make these unique, but small-scale industries self-sustaining. Otherwise, they risk becoming one of the indigenous communities she helped develop earlier in Zamboanga del Sur.

“When I revisited their weaving center, everything they produced was on their walls,” she said. “The weaving center effectively became a museum, which wasn’t the project’s original objective. If they had sold their products, they would have generated income to produce more and, thus, create a steady source of livelihood for the community.”

Apart from Legarda, who came wearing an authentic red Tibolo top made by the Bagobos, several lumad (indigenous people), led by master weaver Inez Pandian, 80, graced the event. Bringing their trusty loom with them, the Bagobos also did weaving demonstrations using painstaking and time-consuming traditional techniques.

“Sometimes, we have a tendency to just focus on the fabrics, which are, indeed, beautiful,” said Legarda. “There’s nothing wrong in that. But we should go deeper into these things. Who are they? What kind of people are the ancestors of Tia Inez like? How do they live? What do they farm? What are their rituals and traditions?”

The senator has actively supported the development of the Bagobo Tagabawas’ cultural village as well as various activities of the Tudaya School of Living Tradition (SLTs), which teaches the tribe’s younger generations traditional arts, crafts, music and practices.

Legarda and Garcia hope to replicate what they described as a success story by building more SLTs all over the country, including the documentation and preservation of oral traditions such as the hudhud chants of the Ifugaos in Northern Luzon.

“We’re not focusing on one group alone,” the senator said. “There are 110 ethno-linguistic groups in the country. Each of the 110 groups has its own rituals, traditions, fabrics, culture and heritage. Our main aim is to preserve these traditions as authentic as possible.”