After the floods, even the children pitch in to help | Inquirer Lifestyle ❮ ❯ 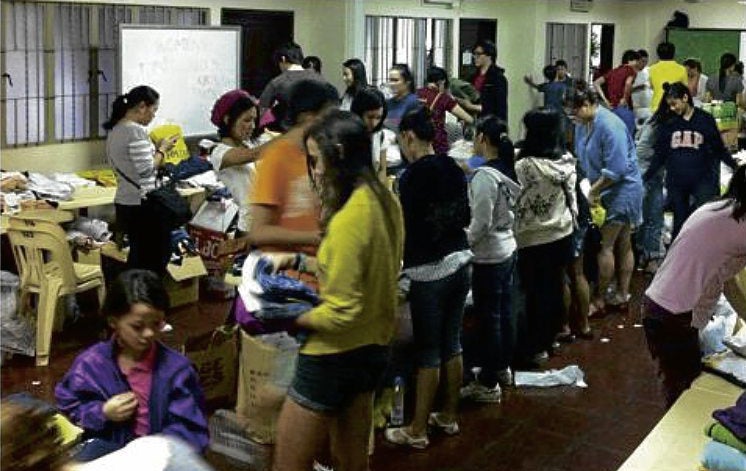 KIDS at the clothes sorting and packing station

After the floods, even the children pitch in to help

Here is a bit of trivia. Have you ever wondered where the word “bagyo” comes from? It comes from the name of one of our most beloved local vacation spots, Baguio.

In 1911, a record-breaking amount of rainfall left the beautiful province inundated— 46 inches of rainfall within 24 hours.

The rain continued for three days and 15 hours, resulting in more 87 inches (2,210 mm) of water. From then on, the name of the province has become synonymous with typhoons.

Some 101 years later, today, we are still struggling with the same problem. Tropical depressions, cyclones, typhoons, monsoons—whatever name the rain takes on (or in this case, doesn’t take on), it still means the same things for our country—floods and deaths.

The news says that 92 deaths have been recorded from the recent habagat, though by the time you read this, the number will have probably increased.

The floods have receded in many areas. Hundreds of thousands of evacuees continue to squeeze themselves into schools, gyms and wherever shelter is offered. The people are facing hygiene and medical problems.

There is also the continuing threat of leptospirosis, a bacterial disease caused by the entry of water, contaminated with rat urine, into an open wound. It’s not hard to imagine the number of dengue cases which could rise.

And as if things were not bad enough, Pagasa is telling us to watch out for more rain and floods as a new tropical depression, Helen, makes its way toward us this week.

But behind this is a silver lining. As the rain poured and waters rose, we saw our friends and family rushing out to buy, prepare and send meals, milk, water and other necessities to those in need. It’s nice to know that the spirit of damayan is alive, even in this  digital age. From carrying bahay-kubos, it has evolved into hashtags, tweets and status updates that help people come together for the good of the country.

In our local community, we have JJ Yulo, or Manong J as he is fondly called, to thank for quickly opening a relief operations center in our parish church hall. Before we could even confirm what was happening, a text brigade was already in place asking for donations and volunteers and scheduling truck deployments to relief centers.

In the parish hall, I saw old friends out to organize things, but was pleasantly surprised to see that 80 percent of the volunteers with us were kids! As early as Tuesday, with the winds blowing wildly and rain falling incessantly, we had children as young as 10 years old, busily sorting through bags of clothes and food and running back and forth to put them in the right places.

The next day, while many kids their age would have preferred to stay home and enjoy their break from school, there were even more of them! We even had a couple of seven-year-olds who happily did their part by picking up empty plastic bags and trash on the floor as we hurriedly packed clothes and relief goods.

I wish I knew the names of all these great kids who came and spent their time with us, but there was no time to chat and get to know each other.

They grouped on their own according to age and gender. I noticed the high school and college boys would work by the doorways, as they were always the first to run out and volunteer when someone would come in and ask for help in carrying goods from their car. They would come back, wet from the rain but grinning widely as they presented whatever supplies they had brought in.

The girls were very sweet as they even tried to match tops and bottoms before packing the clothes in the bags. Even in times of emergency, girls will be girls.

They were also incredibly thorough in the food “factory line” as they made sure that each bag contained the different food items that would be necessary per family.

When it came to volunteering to go with the deployment trucks, the older kids had no qualms about signing up, even if they didn’t know where they were headed half the time. You gotta admire the energy and enthusiasm of the youth.

I must admit, I was so inspired that the next day, I brought Adriana along. The rain had lessened significantly and the night before, she watched the news with me, which allowed her to clearly see the effects of the rain.

She brought her own bag of clothes to donate and went to work sorting out what was for men, women and children and bringing them to the right tables. I was glad to see her enjoying herself and trying so hard to make herself useful.

When she ran out of clothes to sort, she followed the bigger kids around and picked up empty bags to put in a corner for reuse or disposal. That night, she seemed genuinely excited as she talked about her experience with Migs.

I believe that by nature, people are good and have an inherent desire to help. And this is most obvious in children who happily get to work and do what they can, no matter how young they are. All we have to do is encourage this goodness by giving them the chance to help, and guiding them in the right direction.

One small but nagging question came up as we packed the bags. What will become of all the plastic bags from all the relief operations? Will we see these same bags again floating in the floods?

It is highly probable. For now, there is the pressing need of providing food and clothing, but I hope we figure out a solution to the problem of garbage and all the other contributing factors to flooding.

It is frustrating to know that the disaster that occurred last week will not be the last as we face more typhoons.

So, is this the fate of our country? Are we doomed to suffer the wrath of the rain gods? No, not today. We Filipinos will endure the rainfall, and as the netizens have proudly proclaimed, “the Filipino spirit is waterproof.”

The lightning is no match to the blaze of glory that our everyday heroes create.

Who can forget the story of 18-year-old Muelmar Magallanes, who saved more than 30 people but unfortunately lost his own during “Ondoy”?

In the recent habagat, images and video clips of a rescue worker clutching a young girl, while hanging on to a rope and making his way over a flooded street, went viral and had everyone remembering the battle cry from 2009: “Where I’m from, everyone is a hero.”

Then there are the new heroes growing up before our very eyes. The skies may be dark, but our horizon shines brightly with the hope for a new generation of heroes who will continue to do whatever it takes to help our country move forward.

Keep sending donations and helping. Most local parishes are still accepting food and clothes, or you can go to www.redcross.org.ph/donate.