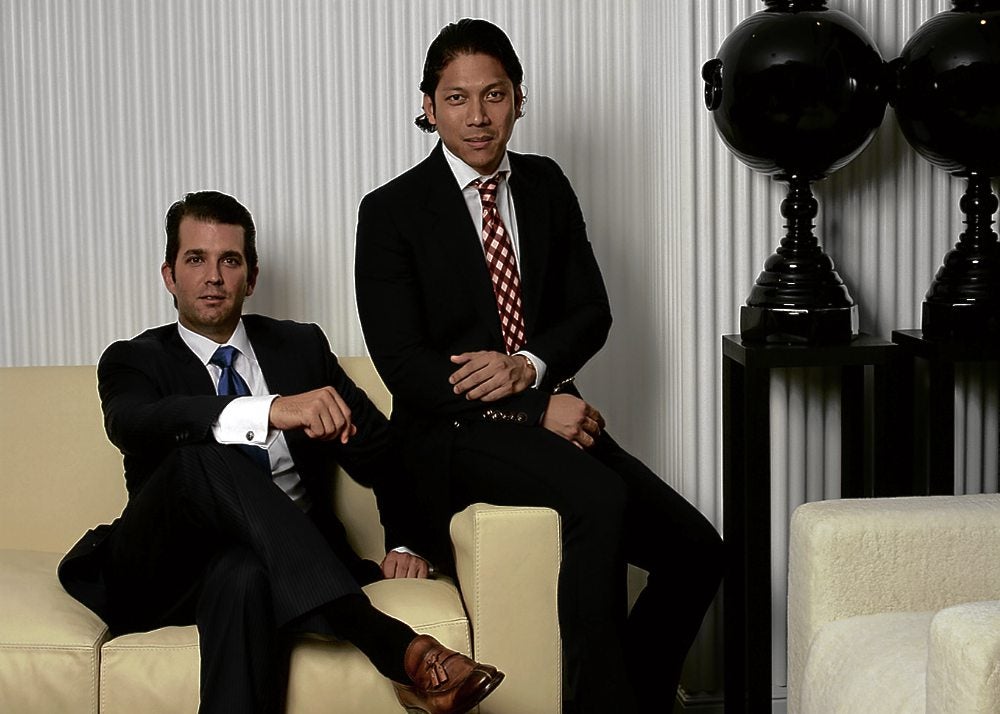 IN PLACES we’re not familiar with, it makes sense to partner with the best in those markets,” says Donald Trump Jr., executive vice president for Trump Organization, with Robbie Antonio of Century Properties. NELSON MATAWARAN

Clad in a bespoke tuxedo, Donald “Don” Trump Jr., executive vice president of the Trump Organization, was a co-host of a charity dinner in New York.  Walking down the red carpet, he was stopped by a reporter who asked his views on the charity cause.

“I literally had no idea what I was there for,” he recalled. “I figured it out and covered it up for the press. But it was embarrassing to myself.”

When he came home, Don examined his conscience. “That wasn’t me. I want to take ownership of something and take it to the next level.”

By chance, Don had friends who had joined Operation Smile missions to the Philippines. Operation Smile is an international NGO that mobilizes medical professionals and volunteers who provide reconstructive surgery for children born with facial deformities such as cleft lip and cleft palate. They sought Don’s help because he could help them establish a New York presence. Hence, Don became a founding member of the Operation Smile Executive Committee in Manhattan and he now sits on the board of Operation Smile International (OSI).

In the past 10 years, Don has been hosting what has become one of the major charity events in New York.

“It’s pro bono,” he said. “It’s not the usual let’s have a party for ourselves and maybe there’s some leftover for the charity. It’s about making sure that everything goes to the recipient—the children under the surgeons’ handiwork and being able to give them the opportunity to smile.”

Don and his younger brother Eric, also a vice president of Trump Organization, came to the Philippines for the groundbreaking of Trump Tower Manila at Century City along Kalayaan Avenue, Makati.  They met the press to discuss the development and the Trump brand.

By coincidence, Robbie Antonio, managing director of Century Properties and project head of Trump Tower, is a board director of Operation Smile Philippines (OSP). So the Trumps’ itinerary included gracing the inauguration of the Manila Cleft Care Center in Ospital ng Sta. Ana.

Don said the recent annual Operation Smile gala, which he hosted in New York, raised over $2 million. “We’ve been able to raise enough money created with my friends in the network to do 50,000 operations for children all over the world and change the trajectory of their lives forever. This has been something special and meaningful to me.”

Don said he’s happy that the Antonios “have been doing a lot for Operation Smile Philippines.” “It’s great to combine a business trip and to be able to open up a permanent care facility,” he added. “It’s not just do medical missions when the surgeons come here a few times a year, but to have a facility to take care of the kids all year round.”

As this year’s chair of the OSP development committee, Robbie is tasked to raise $1 million (P42 million) for the 30th anniversary of Operation Smile.

Before Robbie could make further comments about the challenge, Don interrupted, “Don’t make it look hard. Make it look easy.”

The eldest son of billionaire Donald Trump Sr. believes that raising money is never difficult if the aim is to improve the lives of many.

Don explained, “I want to keep him (Robbie) motivated so he meets his goal. It’s not easy but it’s what we can do more effectively.  When I think of the doctors, nurses and high school volunteers who travel all over the world and they take their vacation time to be in an operating room  for 14 to 16  hours a day rather than going skiing or  to the beach, that is a serious dedication. That’s much more than we can do.”

Robbie agreed. “We tap into what we know best, using our contacts; more so being spokespeople to generate awareness,” he said.

Don’s wife, Vanessa, who is also a model, is a Smile Ambassador. She has accompanied Don to missions in Nicaragua and other underdeveloped countries.

To Don, looking at the before and after photos of children with hairlip or other defects can’t compare with being on the field, helping in Operation Smile.

“After surgery, when you see the child being given back to his mother who, for many years, wondered if this child would ever be able to play without being looked down upon, it takes us to a whole new level of understanding,” he said.

In New York where charities are de rigueur, Don observed that there are people who are committed to their advocacy and there’s the “proverbial New York rubber chicken dinner circuit.”

“Some on that circuit don’t fully immerse themselves in the actual inner workings of the charity,” he said. “To each his own. If  money is raised for a cause and will be put to use, that will be great for me. It is more about not being a small widget in a big collective thing where you throw on a black tie and drink champagne with your social peers. It’s  putting on my boots, getting down and dirty, and doing the best I can for the organization.”

Philanthropy has been a fundamental in the Trump family. Don added that his younger brother formed his own Eric Trump Foundation.

Don attributed his modest and down-to-earth ways to his maternal grandfather. “I spent a lot of time growing up with my grandfather, blue collar guy, from then Communist Czechoslovakia,” he said. “He recognized the lifestyle we led in New York with the glitz and the glam. He made sure we were exposed to the other side of things so that we understood how the real world worked. I’d spend about two months every summer with him since two years old. I spoke the language fluently. Communist Czechoslovakia was a different world then from what New York was. At a young age, we put life into perspective and to let us recognize how fortunate we were not only to have health, happiness but also financial security and the experiences we were able to get.”

Still, billionaire Donald Trump Sr. has been the major influence. Don recalled that after graduating from Wharton School majoring in Finance in 2000, the dotcom industry was at its peak and the real estate boom was unprecedented. He thought he knew everything about real estate until recession hit in 2008.

“You realize you only know only two percent of what you needed to know. The rest is filled in by the arduous times,” said Don.

Don learned from Donald Sr. after witnessing his father’s financial implosion and his return to power.

“I watched him through the ups and downs of the cycles and of going through and thriving after the cycles,” Don said. “The constant in his life was perseverance—the never-give-up mentality. Fight to the death. Always be on the offensive and go after it. That work ethic has more presence in the Philippines, other parts of Asia and emerging markets where there’s the desire to do what it takes to reach the next level. That’s what I admire about him and he continues to persevere today.”