Love and power among the ‘conquistadors’ | Inquirer Lifestyle ❮ ❯ 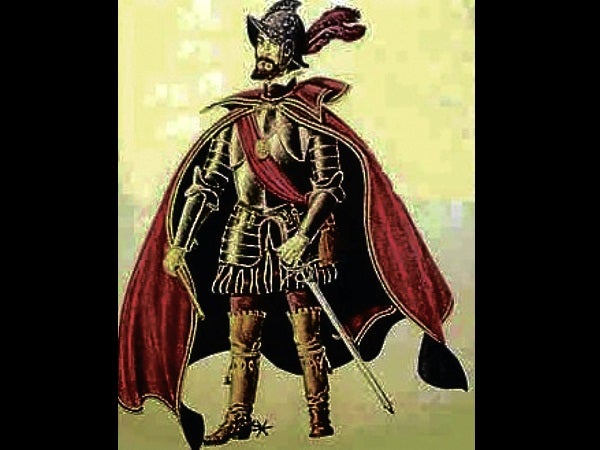 Love and power among the ‘conquistadors’

It was 1571. Balanghay Banahao (now Majayjay, Laguna). Gat Yantok fretted for days about the safety and freedom of his balanghay, the ancestral village of my tribe.

The Spanish conquistador Juan de Salcedo had just taken over the neighboring balanghay (now Liliw, Laguna) in an amicable way.

Gat Yantok was skeptical. After being welcomed and fed by their Liliw hosts, the brash conquistador ordered the confiscation and burning of anitos.

The battle-ready Spaniards blew their ear-splitting horns, beat the hell out of their war drums, and fired their muskets, shattering the peace and quiet in Dalitiwan. Gat Yantok’s itak-wielding men were no match for the Spanish escrimadors, musket gunfire and full metal armors.

Gat Yantok and his men retreated toward the dark forests of Banahao volcano.

1572, Maynilad. Juan de Salcedo, 22, was the youngest and most daring conquistador in the Far East. He had just pacified the Bicol region and discovered gold in Paracale.

Upon his return to Maynilad, he was ordered by Miguel Lopez de Legaspi to establish the vassalage of Northern Luzon. The conquistador’s vainglory was visible and palpable, inside and outside the palisade.

But Juan de Salcedo’s love affair was tragic. Legend had it that he was smitten with Lady Gandarapa, niece of Lakandula, who begrudgingly paid allegiance to Legaspi.

That afternoon, before he sailed for Luzon, Salcedo stood on a rock atop the mouth of the Pasig River, his eyes fixed toward Bangkusay where his love, Gandarapa, stood by the seashore, exotic in her long raven hair, a kayumangging kaligatan beauty (reminiscent of the svelte Miriam Quiambao when she was Miss Philippines, or the buxomy, round-eyed and seductive Elizabeth Oropesa when she was a young starlet).

As Salcedo’s army marched through Luzon, the conquistador was all hubris. Conquistadors were the iconic heroes of the Spanish throne in Europe. They tamed wild frontiers and conquered tribal civilizations in the North and South Americas. In 1520, Hernando Cortez conquered the Aztecs’ kingdom in Mexico. In 1532, Francisco Pizarro ruled the Incas of Peru. Earlier in 1513, Ponce de Leon created a legend by searching for the Fountain of Youth in the jungles of Florida. In the exotic Far East, Ferdinand Magellan circumnavigated the world, but perished on the beach in Mactan.

Juan de Salcedo assumed the stuff of legend in Asia.

1573. Vigan. Salcedo proclaimed Vigan the center of Hispanic rule in Northern Luzon. With Cebu as the center in the Visayas, and Maynilad as the seat of government, Spain’s rule of the archipelago was complete.

In the bloody battle, Martin de Goiti, the resident conquistador, was killed. Salcedo rushed to Maynilad to launch offensive battles against Limahong’s pirates. Capitan Sojo, a Japanese officer in Limahong’s army, was killed. The pirates escaped and sailed back to China.

Salcedo was rewarded with a huge encomienda in Vigan in 1576. Pomp and power were his. But his forbidden love with Gandarapa caused him loneliness and frustration.

Fil-Hispanic novelist Nick Joaquin wrote that Gandarapa managed to send lotus flowers and a missive to Salcedo before he sailed for Vigan. Gandarapa vowed her undying love and faithfulness. After that, the lovers lost contact.

Legaspi, a hard-nosed racist, intercepted and burned Salcedo’s letter to Gandarapa. A false rumor circulated that Salcedo married the daughter of the King of Laoag.

When Salcedo returned to Manila to claim Gandarapa’s love, she had long been dead of a broken heart.

Salcedo, desolate and grieving, returned to Ilocos. During one of his expeditions, he caught malaria and ran a burning fever. Finding a stream, he drank and drenched himself with icy cold water. Hours later, he convulsed and died.

In his breast pockets were found dried leaves of lotus flowers Gandarapa gave him. Juan de Salcedo, conquistador, was dead at 27.

2012. Dalitiwan Resort, Majayjay, Laguna. Last summer, I brought my grandsons Pablo, Carlos and Toby to Dalitiwan river rapids to enjoy the thrill of romping and splashing in its icy cold pristine waters.

In Dalitiwan, I can hear the piercing war cries of Gat Yantok and his men, the clanking of their bolos hitting the steel shield of Juan de Salcedo whose swift escrimador thrust can pierce the heart of my (I presume) ancient ancestors.

Ah bless them, my freedom-loving tribe. So raw and yet so brave!