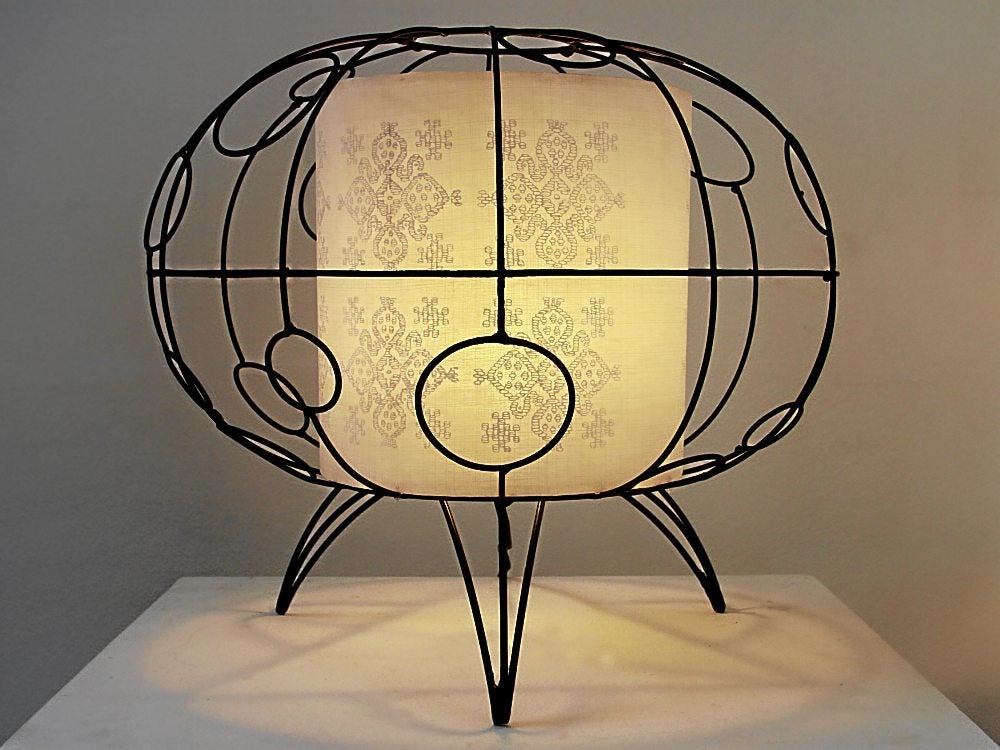 ABEL’S modern use as a lamp fixture

When GMA 7 ran a preview of its teleserye version (TV miniseries) of the epic “Biag ni Lam-Ang,” the Ilocano folk hero was dressed in bahag. The cultural cognoscenti lambasted the production for inaccuracy.

According to oral tradition, Lam-Ang was dressed in striped trousers and patterned shirt, which must have been made from abel, the handwoven fabric of Ilocos.

Now that tribal patterns are the vogue, here comes Pintô Art Gallery with a selling exhibit of abel,  lovingly handmade by artisans using wooden looms under the supervision of Al Valenciano, founder of Balay ni Atong (House of Atong).

The balay is  a study center for traditional textiles from the north, which is based in Abra. Valenciano, who is also an artist, signs his paintings as “Atong.”

“The abel has been part of the Ilocano’s life cycle,” says Valenciano.

From birth, the infant is wrapped in abel. In adulthood, one uses the abel in weddings, or it is given as a gift. The abel is also used as blanket.

In death, the corpse is wrapped in abel. The fabric is also passed on as an inheritance.

At Balay ni Atong, the abel is given a modern spin as it is utilized in lampshades, furniture upholstery, wall tapestry and tableware.

The fabric designs are based on original textiles from the 18th and 19th centuries which belong to Valenciano’s collections. Remaining true to the original motifs, the fabrics are contemporized in modern colors and scaled to suit the tastes of a modern market.

Valenciano says his antique fabrics collection was recently shown at the Brooks Art Museum in Memphis, Tennessee. The research of scholar Norma Respecio explained its history.

“Biag ni Lam-Ang,” recorded in the 16th century, holds many references to the value given the weaving tradition. In the olden days, a proper lady must know how to weave on the loom. Cotton farming was vital to the textile tradition and many old Ilocano words were coined as references to the craft.

In the pre-Spanish era, Ilocanos bartered cotton for gold.

During the Colonial Period, the Spaniards considered the cotton and textiles of superior quality, that they were considered part of taxes.

Known for its sturdiness, the abel Iloko were used as sail cloths in the Spanish galleons. According to Respicio, the Ilocano fabrics were comparable to the linens from Belgium.

Many towns were known for their unique design weave using the pedal-frame loom. Although weaving is basically the intertwining of horizontal and vertical yarns, the actual design is based on the order of the yarns and the warping frame.

The designs can be as simple as the tricolor stripes, worn by people working in the fields and the plaids used in skirts. Then there are the  prominent patterns that reflect the Ilocano’s bucolic lifestyle—plants, animals and human figures.

Some patterns, such as the chicken and bird, are considered lucky and are found in blankets and mantles. The kissing fish on the blanket is believed to invoke fertility.

Grids of geometric patterns, ridges, textured flowers are result of a more complicated weaving techniques. These patterns are commonly made for garment material. It also comes in patterns of eyes, small diamonds, guavas, turtles, serpentine lines and zigzags of rivers.

One of the most popular weaves is the binakul, characterized by circuitous patterns and squares and rectangles against a scintillating grid of lines and circles. They are commonly employed in runners.

For blankets, the whirlwind pattern is believed to drive away evil spirits because of the dizzying patterns.

During the American Period, dyed yarns and cotton were being imported, thereby creating less demand for the local goods. The abel was no longer a premium product.

Weaving was interrupted by the war but revived during the latter part of the  Japanese Occupation.

Valenciano has been working with weavers to keep the craft alive.

“We documented the production line. This assures us of the continuity,” he says. “Abel Iloko of this quality is comparable to the Italian linen. We sell blankets from P9,000 to P15,000. You won’t see this quality in the markets. It takes three weeks to set up a loom and three months to weave a blanket; four months for the insungkit [intricately woven in a sea of solid colors]. Abel is a work of art.”