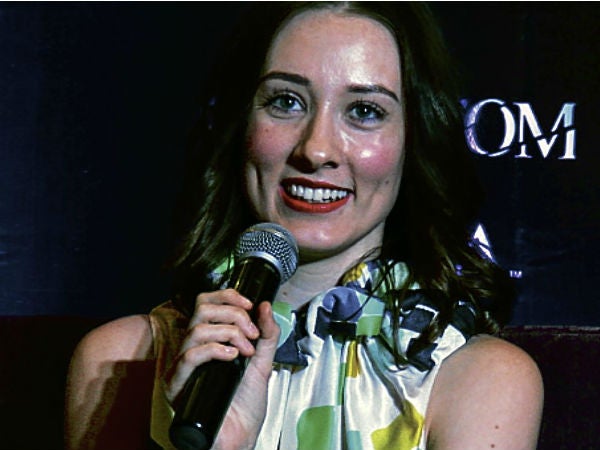 ‘Phantom of the Opera’ to mesmerize Manila starting this week

Just as how daunting weather and dampened spirits are met by Filipinos, for over 130 international cast, crew and orchestra members of Andrew Lloyd Weber’s “The Phantom of the Opera,” the show must and will definitely go on—with a season extension to boot.

Despite the fact that the production’s welcome party included destructive southwestern winds and a typhoon, Broadway’s longest-running musical is bracing itself for 16 additional performances in Manila, which will last until the end of September at the Cultural Center of the Philippines.

Musical supervisor Guy Simpson said the Asian run would be banking on the concentration of talents in the Philippines.

“The talent here is incredible… you guys have high standards,” said Simpson, who had flown to Manila in the late 1980s to hold auditions for “Miss Saigon,” the historic West End play that introduced Lea Salonga and a host of Filipino performers to the Anglo-American musical theater audience. “During that trip, I saw the most incredible singers.”

Since then, Simpson has scouted for potential talents in the country, especially when a part opened for the international cast of “Phantom.”

Ong will be joining  as a member of the ensemble and also cover the role of Piangi, counterpart of the opera house’s prima donna, Carlotta.

“For many musical artists, this would be considered the pinnacle or height of their career,” said Ong, a graduate of the University of the Philippines’ College of Music. “Sometimes I feel like I’m dreaming and when I wake up, I’m still in the dream… Part bewilderment, part disbelief, and part blessedness. I’m using superlatives because until now it’s just so hard to believe.”

Even without specialization in acting or dance, the voice major outdid others in the worldwide search. He said he halfheartedly expected to be treated with aloofness or condescension by the people in the production, but was pleasantly surprised when he got to rehearsals.

“They’re just so warm, so nice, so accommodating, but you can see that they’re still very disciplined and you see that it is what’s needed,” he said. “Maybe that’s what Filipinos lack. Although we have the talent, we sometimes lack the discipline.”

Ong is not the only fresh face in the Asian tour. It will also be Claire Lyon’s first time to be playing Christine.

Lyon, a classically trained soprano, said  she had been carrying the role for some time now as she also played the role  in the Australian production and the “Phantom” sequel, “Love Never Dies.”

Producer Tim McFarlane, managing director of The Really Useful Company Asia Pacific, noted that the actress “is the perfect Christine” and a “beautiful performer.”

“I think the fact that she’s so compassionate toward the Phantom, that she sees his beauty on the inside as opposed to the outside,” said Lyon. “I think that’s what I admire most about her.”

Veterans in the main cast are South African actors Jonathan Roxmouth and Anthony Downing, who will be playing Christine’s love interests, Phantom and Raoul, respectively.

Both actors took on the same roles during the production’s recently concluded South African season.

Roxmouth, who was named Best Leading Actor in a Musical during the 2012 Fleur De Cap Awards in South Africa, has a ball playing the much-coveted role.

“This is probably the most complex role in musical theater. I think, no—I know it is because everybody who has played it, once they move on to other projects, it’s just like nothing comes close to this character,” said Roxmouth, who is also a concert pianist.

Downing is a seasoned actor, singer, dancer, pianist and composer who seems to fit into Raoul’s Prince Charming role effortlessly.

On how Christine is torn between the two men and the different worlds they offer, and why she should choose his character, Downing mused, “I guess, to put it plainly, I’m probably meant to be the better looking one. Although, I know many women who like the whole rough look of the Phantom, so it’s a tough one.”

Others in the cast are James Borthwick as Monsieur Firmin; Jason Ralph as Monsieur Andre; Thabiso Masemene as Paingi; and other veterans such as Andrea Creighton and Rebecca Spencer as Carlotta and Madame Giry, respectively.

The best of the best

The tragic romance is set in the Paris Opera House,  said to be haunted by a Phantom. Young talent Christine Daaé catches the Phantom’s fancy and he eventually falls in love with the performer even if she has already pledged her love to her childhood friend, Raoul.

This ignites a feud that affects the activities of the opera house and leads to an emotional roller-coaster ride filled with passion, jealousy, devotion, deceit, and thrill. Christine is then forced to make a decision, which can only end two ways—her marriage to the Phantom, or Raoul’s untimely demise.

With a world-class cast and crew; nearly 100 tons of sets; over 230 intricately designed and restored costumes by the late design titan Maria Björnson; and the plot’s unexpected twist, “The Phantom of the Opera” is truly one of the most exquisite multi-sensory experiences in musical theater.

“Inside a musical like this, which is ‘God’s gift to musical theater’ as it has been quoted, it’s true on every level,” Roxmouth said. “You are getting the best of the best—in design, in orchestra, in score. It’s just that show that has continued to set the bar for musicals after it. It’s been around for 26 years and there’s a reason for that. You can’t put it down to one thing.”

“The Phantom of the Opera” is presented by Smart Infinity and Citibank in cooperation with Philippine Airlines. It is produced by Lunchbox Theatrical Productions; David Atkins Enterprises; Hi-Definition Radio, Inc.; and Concertus, in association with The Really Useful Group.

Asian Hospital Charities Inc. shall be opening the Asian season of “The Phantom of the Opera” on Aug. 25 to raise funds for the medical needs of the underprivileged.

For opening-night tickets, contact the Asian Hospital through tel. 7719000 local 8202. For inquiries and tickets dated otherwise, call tel. 8919999, or log on to www.ticketworld.com.ph.