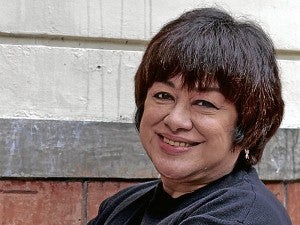 In Dec. 22, Mitch Valdes, singer, actor, funny bone, will have the distinctive honor of being the first Filipino to hold a concert right in Manger Square in the ancient town of Bethlehem.

She will sing beloved Christmas carols like “O Little Town of Bethlehem,” and favorite ditties such as “In My Life,” by the Beatles.

It will be a one-hour concert in the open, underneath a canopy of twinkling stars. Mitch will make sure to bring along her ever-reliable Minus 1. She will not just sing with her heart.

“God made me a comedienne. I will also entertain,” she says. “I will put up a show!”

Her journey all began early last year when ANC’s Tina Monzon-Palma, over live TV, asked her about her “bucket list.” Said Mitch, a little wistfully: “I’d love to visit the Holy Land.”

Mitch has been all over the world, traveling in mostly off-the-beaten tracks, the adventurer in her exploring the “inner cities” usually avoided by ordinary tourists. A favorite ritual is to sit and sip in sidewalk cafés, just watching the world go by.

“But I’ve never been there, not the Holy Land,” she said.

It was that “bucket list” interview that made it all possible. That led to an invitation by a certified Mitch Valdes fan, Arlina Onglao, who owns Journeys of Faith Inc., a travel agency, for Mitch to come, see and sing in the land where Jesus was born and where He died.

Says Rona Onglao-Sarte, Arlina’s daughter: “Mitch was scheduled to leave for the Holy Land this October. But our tour operator challenged my mother to bring a singer for Christmas in Manger Square, as many singers and chorale groups have long performed in the Square, representing their own countries.”

Sure enough, the trip was moved to December this year.

It should be noted that there are many Filipinos working in Israel, land of God’s Chosen People, and where a big chunk of the Holy Land is situated (Bethlehem, Palestinian hub of culture and tourism, is in the West Bank). Mitch wants to bring a taste of our Pasko to these homesick OFWs, as well as entertain tourists from many nations.

Rona also mentions the fact that Filipinos need not apply for visas to visit Israel. “The Philippines enjoys a most-favored-nation status there,” she explains, because, in 1948, our country voted in the nascent United Nations for the founding of Israel.

“It really is so easy to travel to Israel and to see the Holy Land,” she says.

As for Mitch, she is rediscovering her inner, spiritual core. The past three years saw her in “crisis mode.”

This St. Scholastica alumna claims that the good Benedictine nuns in her time in that exclusive college for girls saw “a woman with a potential for disaster.”

“The nuns never stopped praying for me since I graduated,” she says. The younger Mitch was more like a Wild Child, a hippie, a free spirit. “My generation did not go for rituals. As the hippie mantra goes, it was—I pray what I pray.”

Mitch describes herself as a late-bloomer Catholic, as she now turns to prayer. Where before she would go to Church at her own pace, like on Christmas days, and irregularly on some Sundays, she finds herself at the Mary the Queen Church beside her house in Greenhills, at the end of the day, at 6 p.m. This, almost daily.

The church, she reflects, is a place to touch base and make “lupasay,” adding underneath her breath, “internally.” What she means is deep meditation on her relationship with the Christ Jesus.

She has come to love the Mass. “I like the prayers. There is comfort in structure and the Communion.”

She has found that “out there”—everywhere without God—

“there is no meaning. So, one goes back to God.”

But a very young Mitch had a grounding in faith. During her growing-up years in Tokyo, Japan, she went to special Catechism classes in a US military base. Her father was the late Manolo Valdes, a balladeer of Spanish love songs.

“He sang the classics, jazz, Sinatra,” says Mitch. “He went to Japan riding the wave of Filipino singers working in that country in the 1950s”—the original japayuki before the word came to light, as Dolphy, who went the same route, used to say.

“Manolo Valdes was a nightclub superstar,” says the proud daughter. He was a celebrity who often performed in Bayside, “when Bayside was Bayside, the supper club, the go-to place for high society.”

It was the old Bayside in her element, before the club degenerated to seed, with bored-looking “hostesses” crowding in glass-paneled rooms, as they waited for male patrons to point and peek. This was Bayside before disco, way before karaoke bars. Manolo’s Bayside scintillated during the Big Band Era.

Mitch’s desire to see the Holy Land was triggered during a Vatican sojourn, “at the moment the Pope made dungaw from his window.”

Right there and then, Mitch was waving and shouting herself hoarse, “Viva Il Papa!” to the consternation of her gay travel companions. And when she saw St. Peter’s tomb, “I don’t know why—I broke down and cried.”

She kept on telling herself: “This was a man who walked with Jesus.”

Of her forthcoming concert in Manger Square, Mitch just keeps pinching herself in disbelief.

“This trip is too good to be true. I am flabbergasted. I did not pray for this.”

The Philippine Embassy in Israel, on the behest of Journeys of Faith’s tour operator, is likewise enthusiastically supporting this first concert by a Filipino on Manger Square.

“They’re helping us fix it up, supplying us with microphones and stage equipment, etc.,” says Mitch.

During her “bucket list” TV interview, Mitch shared her wish “to touch the walls and grounds touched by and walked on by Jesus, by Mama Mary.”

Now, she lets out a little happy laugh. “Faith is good. But, you know, touching is better.”

This December, this Christmas, Mitch Valdes, feeling secure and at peace with her Catholic faith, will, at last, be able to touch and feel with her eyes, her lips, her hands and feet the very essence of the Holy Land.