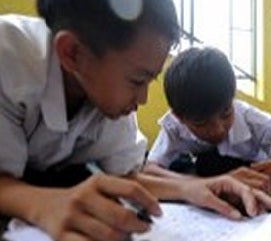 So what’s wrong with ‘awesome’ and ‘okay lang’?

“I do not want my friends to think I’m a genius.”

Those were the words of a 14-year-old boy as he struggled to compose a letter as part of his school assignment.

He had asked for my suggestions as to what he could say in his letter, and I had given him a few ideas. But as we went along, he kept asking me if he could change some of the words to less “smart”-sounding alternatives.

I remember that he asked if he could change the word “teasing” to “joking.” I said “teasing” was the right word to use, because the incident he was writing about was, in fact, about being teased by friends.

He asked, “Isn’t joking the same thing?” I said they could be related, but he had to use the precise word so his reader would get his idea right away.

This was when he said he was worried that his friends might think he was a genius when the teacher read his letter aloud.

Why would a person be considered a genius for using the right words?

When I was in school, there was an emphasis on using the right words, and not general terms. It was normal.

But today you can hear (and read) how communication has become limited. People tend to overuse certain words especially when they describe things. And they abuse the superlatives.

The word “awesome” was an adjective used to describe something that inspired awe. When you heard that something was awesome, you knew it would be way above the norm.

But nowadays it’s used for anything, from parties, food, movies and dates, to clothes, shoes, etc.

A recording artist who was a guest on a radio show was told that a couple of high school students (who were guests, too) liked his new song and would buy his CD. He replied (in his relaxed voice), “Awesome, awesome.”

Did he mean he was now awe-inspired, or that he was expressing gratitude?

Everything is also “super,” “intense” or “solid.”

The Filipino language is in a similar state. “Sobra” is a very used and abused word. People are sobrang pagod, sobrang saya, sobrang galit, etc. And don’t forget “astig”—it’s used for everything as well.

At the other end of the scale, you can hear that things are “weak” or “failed.”

What happens when something is not “awesome” but still is not “failed?” The popular in-between description seems to be “okay lang.”

I like a wider vocabulary to help me get an accurate range of things. It helps me make decisions and choices.

For example, I would like to know whether a restaurant serves food that is bad, good, tasty or delicious. This would help a person know if they can go there to impress a date or a business contact or just to treat his buddies after losing a bet. I don’t want to hear that the two shirts I’m trying to choose between are both awesome.

If a friend tells me a movie was good but not great, I may still watch it on my own as a way to kill time. But if someone tells me a movie is “okay lang” when he meant it was not bad (but close to it) then I may want to kill him! Accuracy is so important.

Why do young people choose to mainly use these few words?

First, many either simply don’t know or are uncomfortable using other (more accurate) words. They are not challenged to communicate with precision. They seem to get by communicating with each other with generalized ideas.

But ask them what exactly they are trying to say, and they are at a loss to explain in simple terms.

In many cases, it has something to do with the parents. They say we cannot understand them (not because of their limited vocabulary) but because we oldies don’t understand today’s language.

This is their shortcut explanation, instead of taking it as a sign that they need to learn more.

In other cases, the otherwise intelligent child chooses to use the same limited words as his lesser skilled friends because he does not want to stand out or make his pals feel inadequate.  He chooses to adopt their lingo to belong.

Unfortunately, there are quite a few schoolteachers who have the same weak vocabulary and grammar. They do not correct the students because they themselves cannot see a problem.

Thankfully, the school grading system still allows us to know our children’s academic performance. We still get to know if they did poor, fair, good or excellent.

Some kids today who fall in the last three levels would tell you that they did “okay lang.” Similarly, a kid who got a rating of fair or good—but not excellent—would say that his grades were awesome.

Parenting experts say we should teach our kids and correct them. We should encourage our kids to want to learn and improve themselves for themselves. Tell them to use the right words and praise them when they do.

I am blessed that my own two daughters have the hunger to learn. When they were little, I bought them books and read with and alongside them. They liked the almanacs and books about how things work. Their teachers said they communicated very well.

They are not considered nerds or geeks by friends—which the boy actually meant when he said “genius.” They feel confident because they know so many things, and so they even try to find out on their own.

By the way, the 14-year-old boy chose to do his homework using the right words. He said it did not matter if his friends called him a genius. Good grades are what he wanted more. So he is a genius!