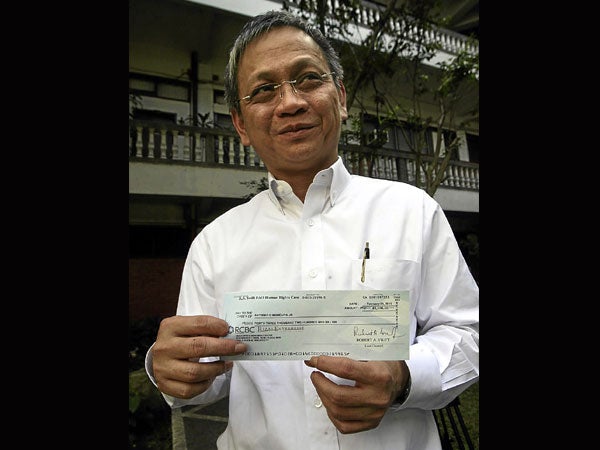 MONCUPA: Believes in the power of commitment (Inquirer Photo)

Working with the ‘Enemy’

His academic record, he reveals, is less than stellar.

Truth be told, Antonio C. Moncupa had an average of 79.9 in grade school and was kicked out of high school at the Christ the King Seminary after just one year for his “restless” and “disruptive” ways.

He eventually finished his Economics and Accounting courses at the De La Salle University as an average student, certainly giving no hint that he might one day become president of one of the country’s fastest growing commercial banks.

The fifth of nine siblings, Moncupa was reared in the family farm in Dinalupihan, Bataan.  His parents had not finished college, but were able to put their children through school from their earnings from the farm and market stall where they sold their produce.

Despite his average showing in school, Moncupa stands out from the small circle of bank presidents in the Philippines for his rather unusual qualification: He was once detained for almost two years at the 15th Military Intelligence Group headquarters for his strong links to the National Democratic Front (NDF), the political arm of the Communist Party of the Philippines.

The former close political aide of the late Horacio “Boy” Morales, considered one of the highest ranking NDF members at that time, remembers how they were caught by operatives of the military intelligence office as if April 21, 1982 were just yesterday, and not over 30 years ago.

“Boy [Morales] picked me up from our house that morning because we were supposed to go to a meeting. What I didn’t know was that our house was already under surveillance, so almost as soon as we left our house in Sta. Mesa Heights, the military operatives caught up with us,” he recalls.

Two cars blocked them at the front and back and the operatives put a gun to their heads, he adds.  Blindfolded and handcuffed, they were brought to what Moncupa would later discover to be a military camp in Bago Bantay, Quezon City.

Moncupa, who was 23 years old at that time, remembers telling himself that his worst fears had come true and that he would die. During those dark days, mere suspicion of being involved with the Left was considered a serious enough crime that one could get jailed or killed without due process.

Fortunately for Morales, he was such a high-profile figure in the opposition that the military feared an immediate political backlash should they hurt him.  They even served him coffee, Moncupa recounts.

He wasn’t so lucky, the activist-turned-banker adds.

“Pagdating namin doon, binanatan na nila ako agad (They hit me as soon as we arrived at the camp),” says Moncupa, who is also quite unique in the banking sector because he remains most comfortable speaking in Filipino, instead of English. As the confessed “hardcore” member of the Left explains, Filipino was the language of the movement that he was strongly committed to for the better part of his young adult years.

Moncupa, who immersed himself in the teachings of Mao Tse Tung and Karl Marx when he was in college, says he was not allowed to sleep and was subjected to endless questioning at the camp. When he refused to admit his involvement, his tormentors upped the ante, electrocuting, beating and subjecting him to water torture to get information from him.  He eventually gave up some information but only after he was sure his colleagues had left their safehouses.

Looking back, Moncupa says things were not as bad as he had imagined, thanks to the Herculean efforts of human rights groups to alert the public about their arrest.

He recalls how a movement was even launched in their name-the Freedom for Five campaign to release him, Morales, and fellow activists Edicio dela Torre, Christopher Sorio and Lucia Alitao-Pagador who were charged with rebellion.

“We were (in) a model prison. We had our own rooms with our own bathroom and television. We made ourselves busy. I even raised fighting cocks. We played a lot of Boggle,” he recounts.

His commitment to the Leftist cause also made him endure the torture, Moncupa admits.  That was why instead of getting a job after he obtained his license as a certified public accountant, he “lived and breathed” the movement for seven years, existing on little else but the kindness of strangers and kindred spirits who were sympathetic to the clandestine organization.

He thought of going back to the seminary, but thought to himself: What would Christ’s call be at this time?  “His call was to serve society,” says Moncupa.

That was how the seminarian-turned-accountant joined the militant Kabataang Makabayan before he was tapped to work closely with Morales, who famously went underground shortly after being named one of the Ten Outstanding Young Men in 1977. As part of the underground movement, Moncupa was given the delicate task of reaching out to other groups and forming alliances to increase the ranks of the opposition and fight the dictatorship.

Though he never lost his faith in the movement during this detention, Moncupa admits that he started lying low when he was finally released on Jan. 26, 1984.  But rejoining the mainstream was harder than he thought, he says.

When he went job-hunting, he would invariably be asked what he did in the years following his graduation from college. Being an honest person, the one-time Economics lecturer at DLSU would always say that he was a political prisoner. That response guaranteed his being immediately shown the door. He could not even get past the first interview.

It also did not help that he was better versed in Filipino than English and had a terrible academic record. He was also very thin at 105 pounds and below average height at 5’3”, altogether not enough to make a good first impression.

“Nobody wanted to take me. No company wanted me. So after a while, I stopped saying that I was a political prisoner. Fortunately, a friend of a friend of Boy Morales got me my first job, some part-time accounting work. Then later, I was referred to Union Bank of the Philippines (UBP). I was hired as a credit analyst, which was my first job in the banking world,” says Moncupa.

It may have taken him a while to get his career in the corporate world started but he made up for lost time, becoming an assistant manager in six months and a supervisor in three years.

“I moved very fast because I worked hard. I was surprised that at the bank, the other employees would go home at 5:30 p.m. I would stay much later because I was used to working 14 to 16 hours a day in the movement. I was used to the long hours, the hard work and the discipline that being underground gave me,” says Moncupa.

Moncupa was thus able to climb the corporate ladder at breakneck speed.

It has been more than 30 years since he was thrown in jail, but Moncupa says that he still finds himself applying what he learned from the underground movement, among them the rigid application of the discipline of sifting truth from facts.

“When I studied at the University of Chicago, they told us to seek the reality, objectify and assess the situation in the business. It was the same thing I learned in the movement. It was about looking at the interrelation of factors, of looking at the given, and seeking what kind of intervention you can do. In business, you also look at strengths, weaknesses, threats and opportunities,” explains Moncupa.

“There is also a principle in the Left called democratic centralism, which means that you allow democracy in the discussion, but once a decision is made, the lower organ follows the higher organ. You have to subsume the self to the collective. The corporate world is also like that,” he adds.

As president of a growing organization, he rallies the troops behind the cause of making newly-listed EastWest Bank among the biggest in the banking world, he says, admitting that he often uses the words of Mao Tse Tung, such as letting a thousand flowers bloom, to help EastWest Bank make that great leap forward from 17th place to maybe the top 10 in a few years.

“My objective has always been to see this country grow, to build a society that is progressive. It is not the ideology that defines me,” says Moncupa. “I still have that desire to contribute and be of service. And I believe that banking can be a good platform to do that because banking is at the heart of the economy.” •