Arguelles said that when he was rector of the Collegio Filippino before he became a bishop in 1994, Pope John Paul would always show how he cared about the Filipino priests studying in Rome. And during papal audiences, the pope would approach and bless the Filipino priests.

Healing priest Fr. Diwane Cacao of the Sancti Dei Healing Center in Lopez Village, Los Baños, Laguna, said he can never forget his private audience with the pope in 1997. A picture of that encounter decorates his tarpaulins and stationery and the T-shirts of his volunteers during healing. 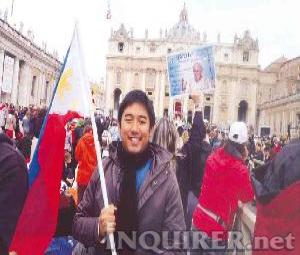 I had a little miracle during the pilgrimage to Rome with Adam’s Travel. My greatest fear was that I wouldn’t be able to walk because my left foot was swollen and couldn’t fit into my shoes. I actually travelled using slippers.

But when we reached San Giovanni Rotondo, I prayed to Padre Pio and the pope to please help me walk. On April 28, when we were going to the church, I was able to put on my shoes without difficulty. After that, I walked without difficulty during the tour. 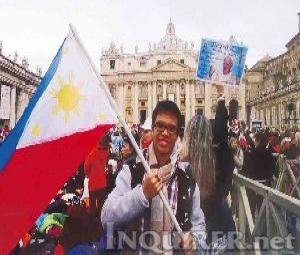 At the Church of Our Lady of Grace where St. Padre Pio used to say Mass, Filipino pilgrims brought by Adam’s Travel, Executive Tours and Ephesus filled up the church.

Bishop Emeritus Raul Martirez concelebrated Mass with six other priests. I felt very blessed when I did the first reading and responsorial psalm.

We held hands in singing the “Ama Namin” with accompaniment on the guitar by a Filipino choir. Some of us had tears in our eyes.

She said she believes that the pope had always prayed for her and her family since February 1981 when he came to Manila to beatify Lorenzo Ruiz de Manila. Aida gathered all the press releases that came out in the newspapers regarding that visit, wrote a letter signed by her husband Geronimo Alonzo and her children Ma. Lourdes, Judith, Alma and Alphonsus.

She brought the envelope to the residence of the papal nuncio to give to the pope, but the guard would not let her in. She left the envelope with the guard.

On June 4, 1981, she received a letter from the pope. Aida surmises that her letter must have been given to the pope while he was recovering in the hospital after being attacked on May 13, 1981.

From that time on, Aida has collected photos of PJP2, believing that his prayers helped her send her children to school as she worked as caregiver for the elderly in the United States for 23 years.

She came back to Manila for good in November 2010. Aida is a graduate of Bachelor of Physical Education from the University of the Philippines.

Twenty-five young men from the Philippines waited at the obelisk on St. Peter’s Square from 5 p.m. on April 30, so they could go inside the square starting at one o’clock in the morning of May 1, Sunday. Carrying the Philippine flag, they patiently waited because they knew it would be difficult to go in.

They had just attended the 44th University Congress at the University of the Holy Cross (April 16 to 24).

I was able to talk to Jet Belber, Johannes Paulus Maria Reyes, Jake Morales and John Bernard Tabuzo. They said they were excited to witness the beatification of the pople who had always held a concern for the youth. They added it was a day of mortification for them because they couldn’t buy food since there was hardly space to walk. People were lying on the ground. It was also a test of one’s charity.

But they stayed put, not minding at all. When finally the beatification took place, they felt blessed of having been part of history.

By the way, novena Masses celebrating the fiesta of Nuestra Señora de Guia will start on May 10 at 6 p.m. Fiesta Mass is May 19, with Cardinal Rosales officiating the concelebrated Mass of at least 30 priests at 6 p.m.

Chapel of the Holy Souls

Cardinals Rosales and Ricardo Vidal will concelebrate Mass on May 9, 9 a.m., at the Manila Cathedral to open the exhibit of the Prayer Warriors of the Holy Souls and the Chapel of the Holy Souls inside the Cathedral. The public is invited.

Today is the celebration of the feast of St. Joseph at St. Joseph Bamboo Organ Church in Las Piñas.

Malate Church is holding a benefit dinner on May 13, Friday, at 7 p.m. at the church grounds to raise funds for the restoration of Malate church. Ticket price is P1,000. Call 523-2593.

St. Pancratius Chapel in Paco Park will hold fiesta Masses on May 12 at 9 a.m. A procession will immediately follow after the afternoon Mass.