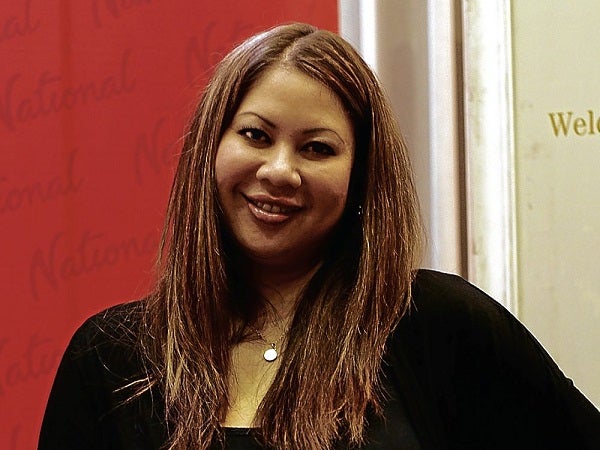 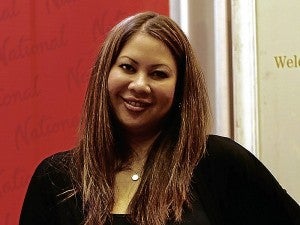 Though she won’t say it to your face, Jennifer Hillier has probably thought about punching you in the face. Hard. Don’t worry, she won’t really punch you in real life, even though her brain may have produced an image of your nose broken and gushing blood. Call it an occupational hazard, since she does kill off people for a living—in the most gruesome way possible.

She is the author of two psycho-sexual thrillers, “Creep” and “Freak”. Her debut novel, “Creep” is a cautionary tale on why you should require your future lover to submit to a full psychological before getting horizontal with him/her. It’s a creepy book that’ll frighten and entertain you at the same time.

Despite the depravities running through her mind 24/7, Jennifer is a warm and bubbly gal. Super talks to her about serial killers—real and fictional, why true crime could be in her future (she is the first cousin of Navy Ensign Philip Pestaño, whom Philippine authorities say was a suicide, but whose family insists was the victim of foul play), how her mother turned her into the murder-loving writer she is, and how a girl who thinks about blood and dismemberment can’t seem to stomach eating balut.

What kind of research went into writing “Creep”?

I worked at a university for a long time and I think that inspired the setting—it was natural for me to write about classrooms, lecture halls and relationships between students and professors. I did research on disguises, there was a part where the killer puts on a very elaborate disguise and I had to do quite a bit of research to see if that was even possible, and it is!

Who would you say is the creepiest serial killer, real and fictional?

Real would be a Canadian serial killer named Paul Bernardo. When I was in high school he was murdering girls my age, so it was all we talked about in school. People were scared that they might get snatched by Paul Bernardo. He’s probably the scariest one. Fictional would be Hannibal Lecter from “Silence of the Lambs.” He’s my favorite. He’s so evil.

Some authors base their characters on people they know. Who were Sheila and Ethan like?

I actually identify more with Ethan, because he says and does everything that we think but we’d never do, so it’s a way to explore those mean thoughts. Imagine your heart is broken, and you want to exact revenge on the person who hurt you. You could never really do that without going to jail, but Ethan is able to do all of those things because he doesn’t care. He doesn’t have a conscience. Sheila, she’s a little bit me in the sense that she’s kind of cerebral, she’s in her head a lot. I wanted to show a heroine that was very flawed. I didn’t want her to be perfect, I wanted to show that you can make terrible mistakes but you can also fight your way back and redeem yourself.

How did your folks react when they read your book?

My dad hasn’t read it. He’s heard that there’s sex and all that, and he’s, “Is it OK if I don’t read your book ever?”, and I’m, “Please don’t read my book, ever!” But my mom, she’s a huge fiction lover, loves suspense and mysteries, and the biggest compliment she gave me when she was reading “Creep” was when she said, “I forgot it was you that wrote it.” And I thought it meant success, because if I could get my mother to lose herself in my story without being aware that it was my book, then I’ve done what I set out to do.

You’ve mentioned that you find it annoying when people ask you if you plan to write nonfiction, but we think you’re sitting on a nonfiction gold mine of a subject: Your mother. Your blog entries about her are hilarious.

My mom is so well-meaning, as all mothers are, though her advice is always a little bit wonky. She’ll say the right thing, but there’s a little twist at the end that’ll make you go, “What?!” I think there is some nonfiction potentially in my future, I’m a really big fan of true crime, so I wouldn’t mind doing some research into more psychopaths, serial killers, but you never know, it could just be a memoir like “Crap My Mom Says” (laughs).

You’re a huge Stephen King fan, which books of his do you love?

I love his early work probably because I read it when I was young. When I was 10 or 11, I jumped from Sweet Valley High right into Stephen King because back then there weren’t a lot of young adult books, it was either children’s books or adult books. My first was “Pet Sematary.” It had a cat on the cover. My mom, of course was, “Oh, you should read this, it’s about a cat.” And I’m, “Yay, OK, I love cats.” She didn’t mention that the cat gets killed in a horrible way, gets buried in the pet cemetery and then comes back to life evil. That book scared me so much but it was such a delicious feeling, and that was it for me, I wanted to read every Stephen King book, and I did, and then I got into thrillers from there.

How Filipino was your upbringing in Canada?

Semi-traditional Filipino household. My mom really wanted me to fit into the Canadian way of life, that’s why they moved to Canada and had me there. She insisted at home that we speak English, so I never learned to speak Tagalog or Cebuano. But we ate a lot of Filipino food—every weekend there would be a party at someone’s house. I was very close to my cousins growing up but my parents got divorced when I was 16, my mom remarried and my dad moved back to Cebu. At that point I kind of lost touch with Filipino culture that I’d had growing up. People refer to me coming here as “coming home.” To me home is Canada. I feel very much like a tourist here, but I don’t want to feel that way. I want to fit in, so I’ve been eating as much Filipino food as I can, trying to learn a few of the words.

I love pork adobo, my mom used to make it until she forgot her recipe; the F1 Hotel’s pork adobo is really good. The people of National Book Store were challenging me to eat balut. I’ve seen it on TV, but I don’t know if I could do it! I’m very squeamish. I love all the traditional Filipino foods, like lechon, pancit, lumpia.

Given your subject matter, do you get creepy admirers?

I’ve met a couple of weirdos. Ninety-nine percent of the people you meet online are great, but there’s that one percent that makes you wish you never had Twitter, you know? They get kind of creepy on you.

When people Tweet me or Facebook me, I’m very careful now about what I say and reveal. I kinda don’t like that because it’s my nature to talk about everything.

Who are your other favorite thriller authors?

Jeffery Deaver. He’s a person whose style I most admire, his work ethic too, because he is able to produce a book a year, and I’m learning how hard it is to be that focused. Plus, he’s such a nice guy! I got to meet him twice and you know how they say don’t ever meet your idols because you might be disappointed? But no, he’s just generous. He likes helping other writers. He’s everything that I aspire to be someday.

What are you reading now?

I just gave up on “50 Shades of Grey.” There was so much controversy, everyone was buying it and talking about it, so we decided to read it and see what it was about. I got about halfway through when I realized I wasn’t into it. That was the last book that I read.

What prompted you to create a female serial killer?

What’s next in store for you?

I’m working on a third book, not related to “Creep” or “Freak.” I definitely envision a third book for Sheila Tao though, but I think that will be sometime next year.

Does your husband get to be part of your writing process?

He doesn’t have much of a love for books at all. He’s a movie guy so the way it works is that if I’m stuck on a plot hole, if I’ve written myself into a corner, which happens all the time, he’s the best person to run it by because he thinks like a movie.  It works for us. If we were both writers, it would be too intense. Can’t have two people like me in a relationship.

Who would you want to see play your characters in the movie?

Maggie Q from “Nikita” and oh my God, Ryan Gosling for Ethan. I’d love to see “Creep” turned into a movie, as long as it’s not a Hallmark movie—that would be just my luck. Lifetime or Hallmark would come to me and say, “We would like to make ‘Creep’ into a movie but we’re going to cut all of the sex and violence.” I don’t know if it’d sell.

“Creep” and “Freak” are available at National Book Store and Powerbooks. Visit Jennifer’s blog at www.jenniferhillier.ca.