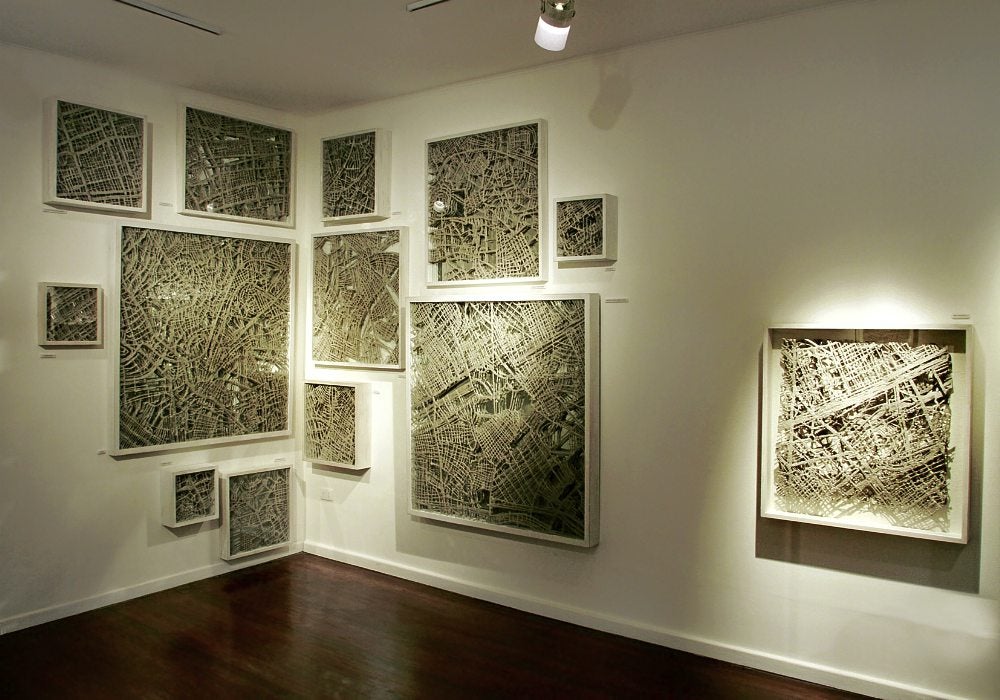 THE MAPS are clustered according to Metro Manila districts. PHOTOS BY NELSON MATAWARAN

In his first exhibit, “Maps” at Art Informal,  he uses newspaper pulp to make maps of the Metro Manila terrain.

Sakuma said the idea was born out of a childhood fascination with maps and exploration. “As a child, I would go to different streets to explore. It was a great adventure.”

“Maps have played a powerful role in history,” he said. They signify territorial domination and have also been the cause of territorial disputes, he added.

Living in the Philippines for eight years as a designer for Masa Ecological Development Inc. (Masaeco), a Japanese pulp- and forest-products company in Tagaytay, he takes the map in the local context.

“I’ve been fascinated with the matrix and the intersection of lines,” he said, adding how these maps could be recognized in the eye of the beholder.

Sakuma condenses Metro Manila and its districts into  intricate paper collages, revealing the  disorder of metropolis. They are layers of  fine, geometrically cut fields, intersecting roadways and districts rendered as reductive abstractions.

Asked why he used newspaper instead of his usual materials of mulberry, pineapple, banana and a Japanese plant called kozo, Sakuma replied: “Newspapers transmit information and they also record history. Like maps, they tell you where to go or lead us to our destiny.”

He explained that ever since he came to the Philippines, he saw the dramatic changes in the landscape as tall buildings were erected and more roads were constructed. “I wanted to capture the moment.”

Newspaper was reverted to its original form of pulp during the process, he said. He drew on it by making a 4 m x 4 m map of Manila. He added more water between the drawings to create the roadways.  The biggest challenge was getting the precise details of the side streets.

Some artworks are composed of three layers of grids.  A mirror is placed below some of the maps as a metaphor for the viewer to look at the self and his direction in life.

“Every city is different. If I did maps on Tokyo, I would get different results,” he said.

Born in Japan, Sakuma studied at the Memphis College of Fine Arts and at the New York Studio Program, affiliated with Parsons School of Design. While working on a project, he discovered the possibility of pulp by recycling a carton and transforming it into new shapes.

After school, he Googled for a job opening and came across an advertisement for Masaeco, which specializes in wall décor and lighting products for the international market.

He became well-known on the local design scene for his cutting-edge lighting fixtures in the Center for International Trade Exposition and Mission’s Manila FAME show, and has carved a niche in the Hall of Fame of the Katha Awards.