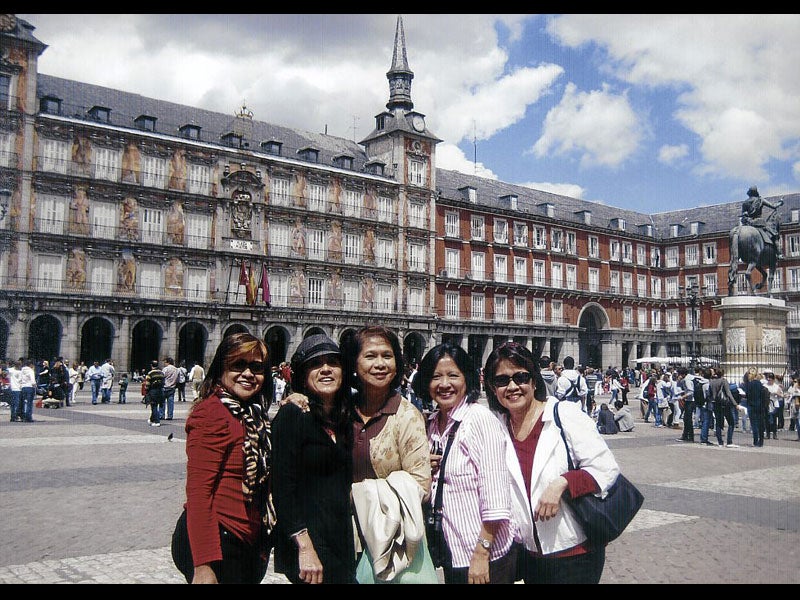 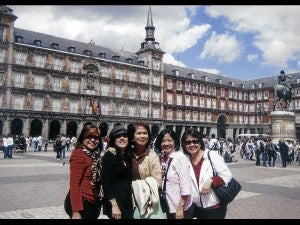 I have been regularly traveling to Spain the past 35 years, but I have never had as much fun as this latest trip.

This May 2011, my classmates from St. Theresa’s College Quezon City of 40 years ago decided to come with me to Madrid.

My family has a flat in the center of Madrid, and so we thought this would be a good reason to travel together and not have to spend on hotel accommodations.

Marlo Mercado Tiu-Tan, Lucille Blanco Flores, Min Manalaysay Mangalindan all said “yes” fast to the idea. Bella Maglaya, who now lives in LA, was also going to Madrid to attend a family wedding, so we all planned to meet up and stay  in my house in Madrid.

The fun began on the  first day. I brought them to the old barrio of Madrid (Casco Viejo), the equivalent of Ermita in Manila. We went to the mesones to try out the typical tapas of each meson and sangria.

Mesones were  caves (cuevas) that have been converted to restaurants. Each Meson has a specialty, whether tortilla, boquerones, mushrooms, jamones. We went meson-hopping to try these.

Then we went to Mercado San Miguel, a wet market converted into a stylish marketplace where people go at night for a drink and some tapas. There’s no smell of a marketplace at all, although it still sells fresh seafood, special meats and fruits. The stalls also sell cooked and ready-to-eat food like jamon, chorizos, cheeses, olives, assorted tapas, pastries and a variety of wine. 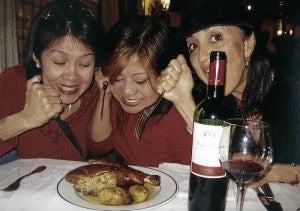 Later, I brought them to a disco, just for them to see the early dawn life in Madrid. Daring Bella Maglaya thought she should try her moves on the dance floor, to the admiration of her former classmates who did not want to dance but just watched. Of course, we realized then that discos were not the place for us anymore, since we were the oldest people in the place!

The next day, I brought them to El Botin, the oldest restaurant in the world, according to the Guinness Book of Records, dating back to 1725. We ate the specialty of the house, which is the Cuchinillo and the Cordero Asado. Cuchinillo is suckling pig, while Cordero Asado is lamb.

Spain is the only country that slaughters lamb this young. It has not eaten any food other than its mother’s milk, thus the lamb has a very clean taste and no smell at all.

Some cooks and waiters of El Botin are Filipinos. The head cook, who roasts the suckling pigs in the old-style oven using firewood, is also Pinoy, so we asked him if we could take his picture inside the kitchen with the cochinillos. He obliged, and said he is always happy to see Filipinos eating in the restaurant.

After the lunch, we went to Plaza Mayor, the people’s square in Madrid. In Spain, all cities have a square or plaza where residents customarily hang out in the afternoons or in their free time. The Plaza Mayor of Madrid is one of the most beautiful. Here you see artists display their works of art, or do dancing, singing . And bystanders show their appreciation by giving them money. 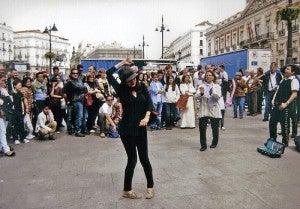 Our daring Bella Maglaya once again thought she should display her talent for dancing. She did dance a bit in the middle of the crowd, but nobody gave her money.

One day, we rented a van with a Filipino driver who lives in Madrid, to bring us out of town. We wanted to go to Avila and to Segovia—Avila because we wanted to see the home of St. Therese of Avila, the patron saint of our school, St. Theresa’s College. And Segovia, because we wanted to see the place that made famous the Cochinillo and the Cordero Asado, specifically the restaurant Candido. Not to mention that the famous Roman aqueduct is also found in Segovia.

In Avila, my classmates were all moved when they saw the place where St. Therese was born and buried. We could not take that many pictures of the altar because we did not want to spoil the solemnity of the place.

Avila is enclosed by a fortress wall that still exists. Our Filipino driver brought us to a place outside Avila so we could have a picture taken with the entire town as our background. This driver was “so Pinoy” in the sense that he knew what we Filipinos wanted. He even served as our photographer.

In Segovia, after taking pictures of the aqueduct, which the Romans built hundreds of years ago, we went to the famous restaurant Meson de Candido to have lunch. Although the founder Sr. Candido has passed away, his son (also named Candido) has taken over the restaurant. He graciously greeted us and allowed us to have a picture with him wearing his Michelin medal. He told us he had already been to the Philippines, upon the invitation of Imelda Marcos many years ago. He even remembered Puerto Azul.

In all this food tripping, my classmates learned and enjoyed the concept of “Comida del Dia,” or the Menu of the Day in a typical Spanish restaurant. Office workers as well as old folk who live by themselves usually go out to eat the “Comida del Dia” in a restaurant near them instead of cooking at home, because for only 10-12 euros, one already has a complete meal with a starter, a main course, choice of wine or mineral water, and dessert. Coffee or tea is extra for 1 euro.

Servings are pretty generous, too. And the food served is good—typical home-cooked fare which is called “Comida Casera.” Thus, one gets to try the typical dishes served in Spanish homes. Nothing fancy but always good.

This vacation with my former classmates was, indeed, one great experience. Besides recalling our times together in high school, we rediscovered and reconnected with each other. This vacation made us feel like we were still in high school. We felt young once again. What a wonderful experience!

I suggest to everyone that once in your lifetime, you must get back together with old friends and do things you were not able to do when you were young. Traveling together is one good way of doing it.