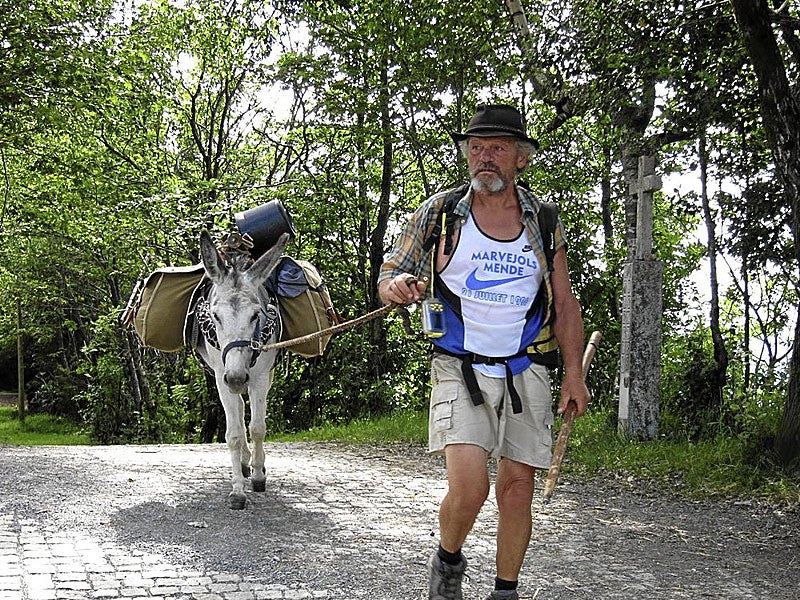 Our pilgrim’s progress to Santiago de Compostela –aboard a bus You get used to the sight of them soon enough: men, women and older children in hiking boots, rucksacks and a seemingly ubiquitous walking stick. They traverse on foot through wheat fields and roadsides, on bikes in the highways, sometimes in packs, most often by their lonesome.

But these aren’t your regular backpackers.

It’s a jarring vision at first. While you sit on your air-conditioned coach, fidgety and anxious to reach your pit stop, there on the vast emptiness is another human making his way to the same destination, miles and miles away, on foot and with a massive pack on his back. Why someone would choose to reach a place hundreds of miles away—on foot!—in this day of the motorized vehicle is beyond comprehension. After all, this isn’t the Middle Ages.

But it has been this way since medieval times, indeed—pilgrims taking the same route to Santiago de Compostela in Spain, the site of the shrine of St. James the Greater.

Story goes that the remains of St. James, who had preached in Spain, were brought to Galicia, in the northwest of Spain, after he was beheaded by Herod in 44 AD.

Some scholars have questioned the veracity of this account—they believe that he never left Jerusalem to preach, for one—and to this day, centuries later, there are still doubts about the authenticity of the sacred relics now enshrined in the cathedral of Santiago de Compostela, Galicia’s capital named after the saint. 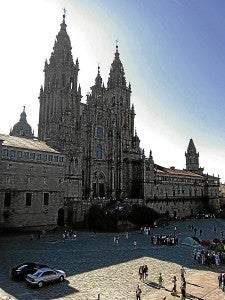 These have not dissuaded the faithful, however, from carrying on a centuries-old tradition to trek hundreds of miles to the shrine, making the Camino de Santiago (Way of St. James) one of the most popular Christian pilgrimages.

Santiago itself is a Unesco World Heritage Site, with thousands of pilgrims from  Europe and other parts of the world making their way to the shrine each year.

Traditionally, pilgrims came from France such that the most popular pilgrim route toward Santiago is the French Way or Camino Frances, the route described in the 12th-century book called Codex Calixtinus, an illustrated guide for medieval pilgrims. The farthest point begins on the French side of the Pyrenees, through Aragon, about 780 km away.

Another is from the Spanish side, Roncesvalles through Navarra, about 726 km. It takes about four weeks to reach Santiago via this route. (A piece of unfortunate news: The Codex Calixtinus was stolen on July 3 from the Santiago cathedral’s archives, only days after we returned home from a media familiarization tour of the French route.)

Pilgrims traditionally go on foot, on horseback, or bike, and carry a “pilgrim’s passport” which earns them official St. James stamps in churches or pilgrim’s hostels (albergues) along the route. This also serves as their pass to stay the night in the albergues, and proof that they’ve taken the official route if they wish to obtain the compostela, the certificate of completion, when they reach Santiago.

(There’s a childlike thrill, some sense of accomplishment, to getting a stamp on your credencial, even if you’re not doing it the ancient way. It must be made clear, though, that one must have walked at least 100 km, or start from the town of Sarria, to obtain a compostela. The date on the stamps verifies if you had, indeed, walked the way. Tour groups like ours who ride the bus are given a group certificate upon reaching Santiago.) 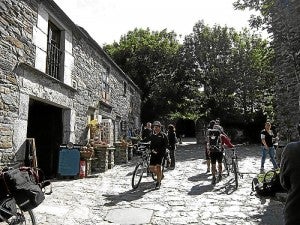 An order of preference is followed in getting a slot in the hostels: First priority are those who arrive on foot, then those on horseback, then on a bike. They take roadside and paved footpaths, following yellow arrows and scallop shell symbols as their guides. The scallop shell has been a symbol of pilgrims since ancient times.

It’s said that the shell was used by pilgrims to scoop drinking water, and was brought home as souvenir; metaphorically, its grooves are said to symbolize how pilgrims come from different points but eventually converge in one place.

Pilgrims typically start their trek at daybreak, walking an average of 25 km a day, reaching their hostel by noon before the sun’s heat peaks.

Local guides told us they weren’t used to meeting Filipinos on the pilgrimage to Santiago; in Avila, maybe, where the relics of St. Theresa are, but not in Santiago. In Logroño, the capital of La Rioja region, where our Filipino group began the Camino Frances, less than 600 km to Santiago, a young seminarian from Samar who was staying at the Santiago el Real Church said we were the first Filipinos he had seen in the 11 months he had been there. 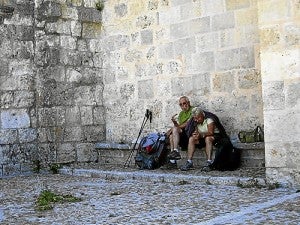 Random Filipinos we have talked to back home are generally clueless about the pilgrimage to Santiago. Filipinos are more familiar with the Marian pilgrimages. But recently, the Spain Tourism Board has been bullish in its program to rectify that. It wants Filipinos to discover one of Spain’s most popular destinations, with packaged tours both for those who wish to do it the traditional way, on foot (with backup transport for baggage), and for those who prefer the comforts of traveling on a coach. Thai Airways is its partner airline.

The pilgrim tours run year-round, and are inclusive of 12-night stays in vari-rated hotels, inclusive of most meals, English-speaking guides and entrance fees to museums and other points of interest. The tours begin in the Spanish capital, Madrid.

It must be noted that many modern pilgrims take the route no longer for religious reasons, but as a form of adventure or soul-searching. Some even do it every year, taking new routes, discovering new paths and meeting new people. Others take to the solitude of walking empty roads, still others enjoy the camaraderie and kinship.

“A lot of young Spaniards still do it because it’s an inexpensive way to spend their summer holiday,” said one of our guides. Albergues charge from 4-10 euros a night. But if one prefers creature comforts, hotels are now also an option for tourists traveling from overseas. 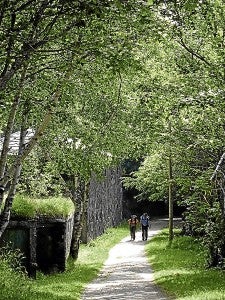 Even if you’re not religious, it’s not hard to find your own fix on the Camino Frances. (See sidebar.)

From an architectural standpoint, the beautiful churches and grand cathedrals along the way, particularly those in the towns of Burgos, Leon and, of course, Santiago de Compostela, are worth the long trip. The path is rich in lessons in culture and history, not just about Catholicism, but of Spain as a whole.

The experience is transforming, even as you reach Santiago via the comforts of a bus. As you make the line to view the crypt of St. James, or the line that leads to his statue that pilgrims traditionally embrace, there’s the sense of oneness with those men, women and children in hiking boots, rucksacks and walking sticks you have passed on the roadside. So this is what they’ve endured many days and weeks for.

Suddenly, to you, the path they have chosen isn’t so incomprehensible anymore.

Thai Airways is also offering promotional fares for individual travelers to Europe starting at $675 (airfare only) until July 31 (for departures until Sept. 30). Call 5280122 to 25 or email [email protected], [email protected] or visit www.thaiairways.com.ph.