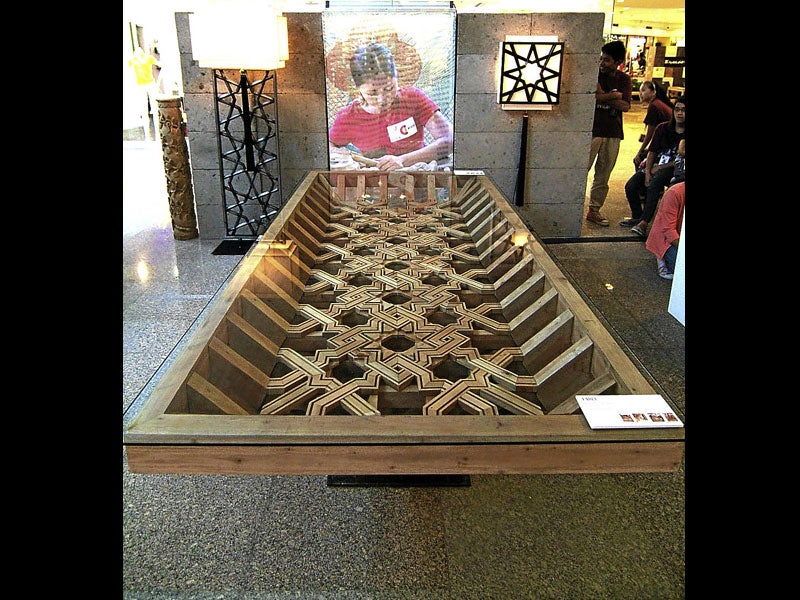 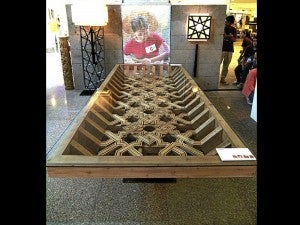 Over 20 wood and stone carvings, welded-steel items, a hand-cut adobe stone arch, and  paint-decorated objects were carefully picked out of a batch of over 100 student works deposited in the school’s gallery and stock rooms.

With the help of Security Bank Foundation, the week-long exhibit at Greenbelt 3 would showcase the work of these students who had been chosen from the Baseco area and heritage-rich provinces.

The exhibit’s ingress into Greenbelt 3 on the evening of June 21, consisting of 52 students, instructors and school staff, was perhaps the biggest group ever to set up at the mall’s exhibit space, and with good  reason:  The exhibit pieces included a hand-cut adobe arch, and a scale model of a roof with a ceiling hand-carved with a Mudejar (a mix of Moorish, Gothic and Romanesque architectural styles) motif that rested on a steel base, all loaded into three vans, one van also provided by exhibit sponsor Our Lady of Lourdes Hospital. 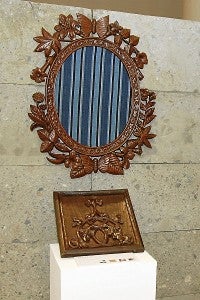 This was followed by the opening remarks of  Felipe de Leon Jr., newly installed head of the National Commission for Culture and the Arts (NCCA).

As soon as the two gentlemen cut the red, yellow and blue ribbons adorned by a loop of sampaguita flowers,  Coke Bolipata led Pundaquit Virtuosi, his youth chamber orchestra, in Vivaldi’s “Spring” Concerto; and  Escuela Taller de Intramuros’  exhibit, “Homenaje: Reviving a Legacy, Restoring a Herirtage,” formally opened, witnessed by a mix of foreign diplomats, heritage luminaries, society personages and a sprinkling of blue-uniformed youths from the school.

Floral arrangements on cocktail tables were of red roses and sampaguitas, and a large arrangement of red and yellow roses with sampaguita accents cradled on anahaw leaves at the exhibit entrance set off the Spanish-Filipino motif of the evening. 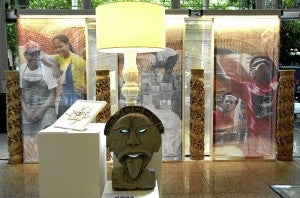 Escuela Taller is a project of  Agencia Española Cooperacion Internacional para el Desarollo (Aecid) with its local counterpart, the NCCA. Set up specifically for the restoration of Intramuros, Escuela Taller’s main project has been its historical walls. Traditional artisan skills related to restoration of built heritage is the school’s thrust.

Admiring the pieces crafted by the students were Intramuros Administration’s José Capistrano. Huddled around the scale model roof, ingeniously presented upside down as a table with a glass top to show off the jigsaw-puzzle pieces of a Mudejar design were Mark Higgins of Slim’s, and historical chronicler Toto Gonzalez, with Margarita Delgado close by.

Behind the adobe wall was AC+632’s Chito Vijandre, coveting the asymmetrical carved frame with florals and butterflies. 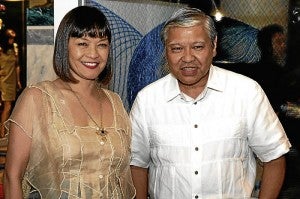 Two gentlemen from Dubai, admiring the faux-marble panels, were ready to recruit some students for projects in the Middle East. Close by stood a carved pillar in bright 18th-century polychrome.

Felice Sta. Maria of the National Museum, along with Deonna Tan-Chi, representing Pastor Peter Tan-Chi of Christ’s Commission Fellowship, expressed amazement at the works in stone.

A sample of  a gilt and patinated Corinthian capital, carvings in various states of paint finishing, a wall sconce and a steel standing lamp, also in a Moorish-inspired design got an offer of purchase from Juana Manahan Yupangco and other pleas to accept orders from various guests.

Although the school, under the Spanish program, does not include marketing of the objects, ways and means are being studied to include this in the project summary because of the positive feedback the exhibit elicited. 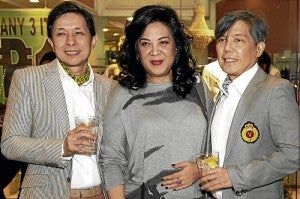 As the general response to the pieces exhibited were more than encouraging to the Escuela Taller staff and their young wards,  many guests expressed their support for the school and hoped to see a sincere and committed interest in restoration of  built heritage and patrimony from government and the private sector, coupled with the proper skills training Escuela Taller can provide.

When all the guests departed, the euphoria of opening night was capped when school director Michael Manalo turned up the volume on Sylvia La Torre’s “Katuwaan,” as students and staff spontaneously formed a joyful conga line around the exhibit space.