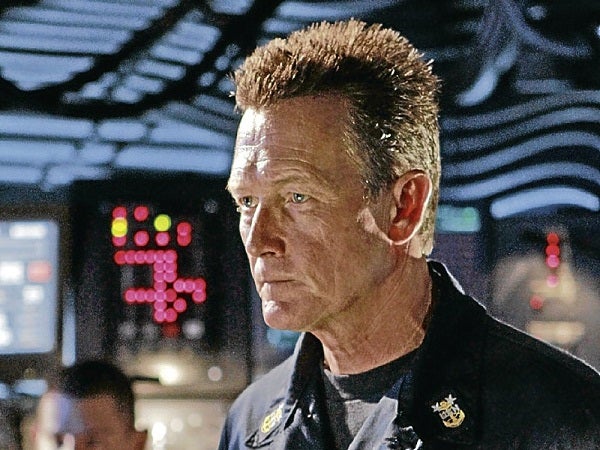 Mutiny on the USS Colorado

The premise of the new TV action-drama “Last Resort” is horrifying: A group of Navy officers in charge of nuclear submarine USS Colorado is given orders to deploy a nuclear missile into Pakistan, the opening salvo to what will surely be a terrible war. In a crisis of conscience, Captain Marcus Chaplin (played by Andre Braugher) refuses to carry out the order and as they become homegrown terrorists in the eyes of the United States, the USS Colorado crew escape to a Nato island, instantly becoming the world’s smallest nuclear nation. They may be small but as Autumn Reeser explains to her lover (and to the audience), the USS Colorado is a mean submarine, equipped with 24 nuclear warheads—more than enough firepower to pose a threat to any nation.

“Last Resort” is wildly entertaining. You won’t be able to look away. It’s television at its very best, perhaps showrunner Shawn Ryan’s (“The Unit,” “The Shield”) most ambitious undertaking to date. And ladies, tune in, because Scott Speedman (or Ben Covington to many of his adoring fans who remember “Felicity”) is back, and in uniform to boot. Everyone who has previewed the show has nothing but raves for it, it’s one of the must-watch shows from the new crop of Fall TV offerings.

Super caught the fantastic Robert Patrick, who plays Master Chief Joe Prosser, on the phone to talk about what’s ahead for the people of USS Colorado and trying to outrun his most famous character, the villain known as T-1000 from “Terminator 2.”

Shawn Ryan who created “The Unit” created this show as well. I had many opportunities to play soldiers over the years and for some reason Hollywood thinks I’m suited for it and I find it to be real interesting characters. This is actually the first time I’ve played someone in the Navy—it’s an interesting role and it’s coming to me at a different age in my life, it’s a whole set of new challenges.

What is the toughest part about filming for you?

There’s really no tough part about filming. It’s such a great job and it’s just wonderful when you’re working, I guess maybe sitting around and waiting for the actual shots to actually happen, sometimes that can get a little tedious but I enjoy being on sets and I enjoy the people that I work with.

You mentioned the role came with its own set of challenges, what challenges are these?

There are certain emotions that I have to be a little more willing to tap into, there’s some psychological stuff I’ve to deal with. It’s just an interesting character to build, learning what it’s like to be Chief of Boat, learning about the Navy life, those kind of things. It’s a whole new guy to explore but these challenges are part of what we do anyway, it’s part of the job.

Joe Prosser my character is very patriotic. He takes orders well, he understands the oath, he understands his duty to the country. I’m drawn to the role  of the American serviceman, their willingness to die for you, to protect your way of life, their willingness to make that sacrifice for you, and they don’t even know you. I think that’s a real special individual. Joe Prosser believes we should’ve carried out the orders, the orders are authenticated and he believes that his captain, his XO Kendal, and Lieutenant Shepard, have committed an act of treason based on the fact that the higher ups gave orders and passed them down and men have to follow through with those orders no matter what. They don’t get to sit there and think about it, like “Jeez, do I really wanna do that? I don’t know.” So the Chief of Boat is in charge of protocol for the boat, who’s there to say, “Hey Captain, the orders have been authenticated, we have to follow through.” He thinks he’s witnessing an act of treason against the United States, so that’s what this is about—duty faith, fulfilling obligations, order, professionalism, what’s right what’s wrong— I personally have great respect for the men and women of the military and their ability to carry out orders—that’s what makes them effective military.

The T-1000 has become one of the most iconic characters in sci-fi history. Looking back now has it been an advantage in your career?

Definitely it’s been an advantage in my career. If I didn’t have that movie I don’t know if I’d have a career, it was a huge break for me. It’s a movie that I’m so proud of and not everybody has a movie like that on their resume, it’s been such a wonderful experience. I mean I am the T-1000, that’s pretty cool. It’s 20 years ago, and it’s certainly still the biggest thing I’ve ever done. It’s funny because I’ve got five movies coming out this year, I’ve got a movie coming out with Clint Eastwood, I’ve got “Gangster Squad,” I’ve got all these movies and I overheard somebody the other day at the airport, they saw me and they said, “Yeah, that’s the guy, that’s the liquid metal guy from Terminator 2.” And this young man said, “Yeah, that’s the only movie he ever did.” I really went like, wow, that guy thinks that’s the only movie I ever did. How about that. Apparently that’s the only movie I’ve ever done (laughs). It’s certainly eclipsed pretty much everything else I did.

Everyone’s been raving about the show after watching the pilot, what’s in store for the people of the USS Colorado?

I’m so excited about this show because it presents a whole lot of questions: Could something like this happen? If you ask someone from the Navy, they’re going to say no, it can’t happen. Because the captain is going to get an order and if it’s authenticated, he’s going to follow through with the order. So that’s where you kinda have to go like, “Could a guy really do something like this?” Well, what would happen next? Will the United States government really fire on this submarine? Would they try to kill its own men? Would they look at the sub as terrorists from within its own Navy and try to take them out? How much anarchy happens? How will they keep it together? I think it’s going to be interesting for the audience to see how everything plays out.

Did you have Navy consultants on the set?

Most of the guys we have are retired navy sub guys. They’re interested to see how we portray things, they’re keeping us as authentic as they can. I personally feel that most of the men and the women I run into from the armed forces are happy anytime there is a show about the armed forces that show their lives. I remember when we were doing “The Unit” the men and women in the army that I met—I went to Iraq three times and to Afghanistan once—I know those soldiers enjoyed seeing their way of life portrayed in a fictional way as fairly authentic as it could be. I think they’ll have an appreciation for us attempting to portray what it’s like to be on a nuclear submarine in an extraordinary situation, circumstances I think they’ll be interested in. I think they’ll also like to watch the show to see where we screw up and say, “That’s not right, that’s not how we do that, what the hell’s that?” I think they’d enjoy that as well but this is fiction, it’s entertainment. Hopefully people will be interested with the whole ride, where it’s going, what’s going to happen next.

“Last Resort” surfaces first and exclusively on AXN Asia on Oct. 1, and will air every Monday at 10 p.m. Visit www.axn-asia.com for complete schedule.