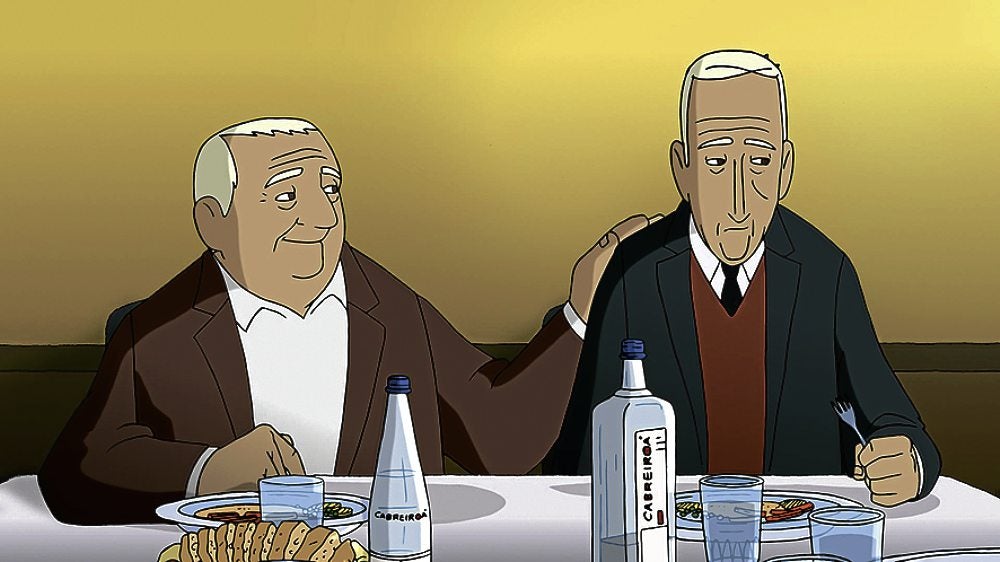 From Spain comes an unusual cartoon that tackles the conditions of old people.

Emilio (Tacho Gonzalez), a retired banker, is sent to stay at a home for the aged. His roommate, Miguel (Álvaro Guevara), is a jolly and wise-cracking bachelor whose family migrated to Argentina when he was a child, and in his middle age, he returned to his motherland. Miguel shamelessly takes advantage of his fellow residents’ deteriorating mental faculty, playing along with their make-believe, cheating them, and conning them into giving him money. He justifies that the residents, blissfully unaware of their absent-minded predicament, need to be preoccupied with something each day or they would “lose their marbles.” To him, his sly antics keep their hopes alive.

With a delicate palette, the film renders poignant illustrations of old people “forsaken” by their families. The elderly care home seems more like a prison fortress, with high walls and fences. It is a stark, almost empty stronghold, overflowing with spotless corridors, unused state-of-the-art facilities, and nodding dotards.

Old age holds several terrors: being alone, feeling abandoned, doubting about family love, growing more infirm, and experiencing a customary tedium of doing nothing. But a greater terror exists, the film claims, and this is in one’s recognition of the irrevocable disintegration of one’s mind.

The elderly care home has an uncanny resemblance to a madhouse. On his arrival, Emilio is met by a smiling old bloke, who parrots back every word he utters. He is aghast to witness Señora Rosario’s repeated enactment of her Orient Express journey, or Carminia’s paranoia of aliens popping out of nowhere even in the pouring rain. To compound these, as if in a gothic locale, intermittent protests and screams from the upper floor could be heard. Downstairs, the residents shudder and sigh, aware that “upstairs” is an iron-maiden chamber for those with advanced stages of dementia.

The film raises concerns and fears which every being would have to eventually face. Where does one lavish the precious last days of one’s life on earth? Would a loving family leave their parent “locked” in a retirement home and rarely drop by to visit except on Christmas Day? Does a senior citizen have a choice not to be a burden to his loved ones, or would she/he rather be in the care of strangers?

The film infuses humor into dialogues and situations, perhaps to neutralize an atmosphere of depression that might be evoked by the gravity of its subject matter, or to suggest ironic subtexts. Scenes validating the incomparable mischief that old folks are capable of (e.g. the hilarious gymnastics hour; Miguel’s impish schemes to conceal Emilio’s apparent ailment from the doctor) act as light-hearted interludes.

Nonetheless, “Arrugas” draws portraits depicting the gentle conduct that comes with age, or the sheer spirit that defies the ravages of time. A patient named Modesto appears at mealtime, and like a big baby, is spoon-fed by his devoted wife Dolores. She tenderly wipes the drool from the corner of his mouth. Often, she whispers into his ear, which makes him smile. Still of sound health, Dolores has opted to stay in the retirement home to care for her husband.

The secret behind Modesto’s smile is later narrated in a flashback. Twelve-year-old Modesto has asked Dolores to be his girl, and won her by bringing her a “cloud.” Henceforth Dolores would tease him by calling him “cheat.” And he would smile. Ah, somewhere in the cobwebs of a fading mind lingers the faint radiance of a sweet long-ago.

Modesto’s condition foreshadows the true state of Emilio’s senility. Emilio has accused Miguel of filching his wallet, then his wristwatch and black socks. Gradually but frequently, Emilio’s behavior manifests serious symptoms of Alzheimer’s, culminating in his joyride accident with Miguel and Antonia, one of their mealtime companions. Subsequently, Emilio is taken “upstairs.” And in a touching gesture of sacrifice, Miguel voluntarily moves upstairs to look after Emilio.

Miguel’s conversion, from an uninterested swindler to a Samaritan, is this film’s ultimate vision of humanity’s hope and triumph in the midst of degeneration; for at the root of our human frailty lies the origin of our basic decency. And in that light (despite the film’s silence on the subject of a possible afterlife), we can all rest in peace.

Shirley O. Lua teaches literature at De La Salle University in Manila. She specializes in Philippine literature, diaspora studies, and film and literature. She is a member of the Philippine Center of International PEN, and one of the founding members of Alon Literary Collective, a Manila-based poets’ group.