How Phil Younghusband keeps himself energized 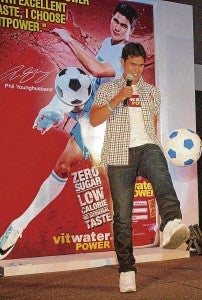 The chicken-and-egg scenario can be applied to Filipino-British football player Phil Younghusband and the state of acceptance of football by Filipinos. Is it his good looks and charisma that’s making the sport popular? Or is the current winning streak of the Philippine team, popularly known as the Azkals, in international games the impetus for his popularity?

For fans of both, it’s not an issue; It’s a win-win situation. There’s more awareness for the sport and they get to see a pretty face on the field as well.

His winning skills, attitude and lifestyle is what made VitWater Power select him as its new endorser, allowing him to step into the role formerly held by world-boxing champion Manny Pacquiao.

“I feel very honored not only to be the newest brand endorser of Vitwater but more so because the previous endorser of the brand is a multi-world champion,” Younghusband says. “I feel equally proud to be a Filipino because of Manny Pacquiao’s accomplishments in the world of boxing. I am, indeed, a big fan of his.”

VitWater Power, nicknamed Vitpower, is an apple-flavored, zero-sugar, low-calorie, energy-boosting drink that has taurine (which aids fat digestion and absorption of fat-soluble vitamins), inositol (which aids metabolism), B vitamins and ginseng. Just the kind of drink that suits a competitive sportsman like Younghusband.

“I am very, very competitive,” he says. Younghusband strives to keep the proper perspective when he occasionally loses a game by singing “Win” by Brian McKnight or reciting Rudyard Kipling’s poem “If.”

“I also have my family to keep me grounded,” he says. “They’re always there to lift my spirits. I hate losing, but winning isn’t everything.”

“I also make sure to get enough rest in between training and games,” he says. “I make sure to take in the right kind of food and fluids.”

Younghusband points out that proper hydration is important not just for athletes like him but also for individuals who are always on the go. He encourages people who live an active lifestyle, like students, and those who work in air-conditioned environments (which results in dry air), like call-center agents, to choose the right kind of drink.

“Some people are so busy that they forget about the amount of water that their body requires. It’s just that some people don’t really enjoy drinking water, but with VitPower, they can have a fun and healthy way to stay hydrated,” he says. “It’s excellent tasting and an extremely good power booster. It helps give me the energy I need, on and off the field.”

When he’s not busy representing the country in games abroad, Younghusband runs the Younghusband Football Academy, co-founded with his older brother and fellow footballer, James.

“The academy started in 2010. We usually go to different provinces, different places trying to promote football. With the recent success of the Philippine team, interest has grown dramatically.”

Their summer program this year attracted about 170 students, from 4-year-olds to adults, all wanting to learn football from the Younghusband siblings.

“We have people from Pangasinan coming in just to (play in) Alabang; it’s amazing how dedicated some of these people are.”

“I want to sustain the popularity of football for a long, long time in the Philippines, and not just for a few months.”

Cris Canaria, brand manager for beverages of RFM, the company that manufactures VitPower, says that the 23-year-old athlete embodies the distinct attributes of VitPower.

“We are impressed with Phil’s relentless spirit to win. He channels his energy to his passion, which is football, and to things that matter, like his family, friends, bringing pride to the country, and his zest for life,” Canaria says.

“I feel blessed that I get to endorse VitPower,” says Younghusband. “I am excited with the tours and activities that I will be doing with VitPower later this year.”

He adds that inspiring the youth to be the best they can be is part of his personal advocacy. He believes every individual, celebrity or not, has the power to make a positive contribution to personal growth and for others.

“We all have the capacity to develop our extreme power, we just need to strive harder everyday and keep ourselves busy and useful to society.”