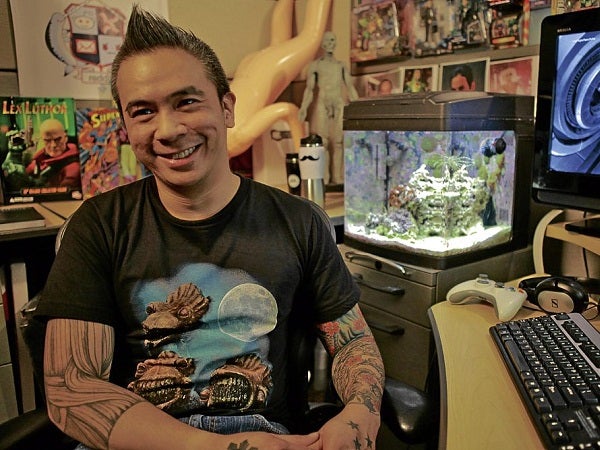 The animated world of Dino Ignacio 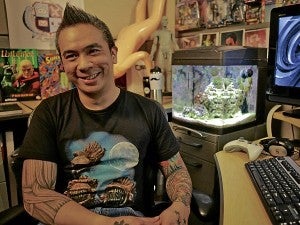 I have the good fortune of having a lot of artistic, musical and just eccentric friends.  They make my life so much more interesting.

Dino Ignacio is known among tech-hipsters as the dude who made Bert Is Evil back in the ’90s, but I know him as Dino-the-dude-that-named-me-Death, because that’s what he did way back in high school.  Unfortunately the name stuck and people who know me from that period of my life still call me “la Muerte” or Wednesday (Thanks, Dino).

Since then, our roads would once in a while collide and due to the brilliance of the Internet and Facebook, we have recently made each other’s presence known, through the most transient of activities of “liking” and “sharing” posts.  I suppose that we will always share a love for things that are geeky, like a video of how far scientists are coming to making a holodeck (those who don’t know what a holodeck is, look it up in Star Trek).

Now, 16 years later, I decide to make him the subject of this Q and A. It was also a great way to catch up with him, ask him how the rogue has been throughout the years, and how he is now where he is.

Dino is the lead user interface designer at EA Games, mostly for Dead Space. (Just a quick nerdy 411: EA Games or Electronic Arts Games is the company behind FIFA, Sims, and Dead Space. They have games on Xbox, PS3, mobiles, tablets and PC.) This means that he “designs and directs the implementation of the user interface (UI)”—he’s the dude that takes care of the user experience and how players interact with the game.

Dino says, “My job is to provide the direction and the process to build it.” (Check out these videos on the UI for a new feature on Dead Space 3:

How did you get started in your work?

I have always been fascinated by design and art. As a child I would draw and make my own comics. In early high school (around 1991) when computers became more available, I learned to illustrate and animate using a program called Autodesk Animator. My love for the digital arts was born. A few years later (1994) I was introduced to the Internet when a friend gave me his old modem. I remember connecting to CompuServe via a 14.4-baud modem connecting to a US number from Manila. It was slow and frustrating, but it was a glimpse at the future. I knew then that I needed to build a career in this emerging technology.

When you made Fractal Cow, what was your objective?

Fractal Cow was an attempt to bring humor to the very barren Internet landscape of 1996.

The World Wide Web was new and there weren’t too many humor sites. I remember my father telling me when I was younger that if you can’t find what you need; then you have to make it yourself. My objective was simple. I just wanted to find content that I liked. And since it wasn’t there, I made it.

How did you come up with Bert is Evil?

Bert is Evil was born in 1997 when I bought my baby niece Sari a Bert doll. Her mother (my sister) complained that it was evil looking. I decided to explore the idea as to why he seemed evil. I crudely Photoshopped images of Bert in compromising and incriminating situations and wrote short essays about each piece of evidence. I uploaded them to my website and it somehow became a hit.

After it won the Webby Awards in 1998, I retired the site and opened it up for mirror sites to take over. It became a proto-meme as many of the mirrors created their own content after I let it go. To this day, there are still sites that churn out Bert is Evil images. (Check out these related videos: http://www.youtube.com/

Did Sesame Street really sue you to bring down the Bert Is Evil site?

No, they did not. They asked me very nicely in an e-mail.

What inspired your book “Tower of Misunderstanding?”

I had lost a very dear loved one and I needed a way to cope with the event. My girlfriend at the time had a younger sister who always asked me to tell her stories when I came to visit. One evening, I did not have a story prepared so I made one up as I went along. I started telling her about the “Tower of Misunderstanding.” The story wrote itself that night. I guess my subconscious was telling me how to cope with my loss. It helped me start healing. I decided to make a book out of it and share the story with the hope of helping others. (Here’s an animated version of the book—

What are you up to these days?

I’ve been working at Electronic Arts. I’m the lead user interface designer for a studio called Visceral Games. I’ve been working on the Dead Space franchise since it started. We are now busily making the third chapter in the series. I lead the team that designs the way players interact with the game. It’s been a really fun franchise to be part of. I’ve had the opportunity to try and do things that have never been done before. I’ve also been very busy hanging out with my daughter. Her daycare is at the EA campus so we drive to work together every day. We spend a lot of time in playgrounds. My wife and I really enjoy being parents. Most of my weekends comprise of finding different places to hang out and explore with Maharlika (my daughter).

What do you love and hate about what you do?

I feel really fortunate to be surrounded by my heroes. I am a fan of everyone I work with. Both professionally here at EA and in the side projects I do. I love the fact that I am constantly in awe and learning from my peers. Hate… hmmm. That’s a pretty strong word. I guess I dislike that there’s no pleasing everyone. I read a lot of the forums and message boards on Dead Space and it’s annoying when people immediately hate on a game they haven’t played yet.

If you weren’t doing this, what do you think you’d be doing?

I always wanted to be a children’s book illustrator/writer but it never lined up that way. I still dream it but I don’t have the time right now.  Maybe in the future. For my daughter’s 1st birthday my wife and I had little books printed to give away to our guests. This is the closest I’ve gotten to fulfilling this other dream. (Author’s note: what a cool dad!)

Would you think of coming home and maybe opening up a business or teaching here?

I’ve thought about this a lot. It’s weird… when I first moved to San Francisco; the intention was to finish school and immediately go back home to work or teach in Manila. But opportunity kept on coming. One thing led to another. I did a self-petition and got an Alien of Extraordinary Ability Visa in 2006. I got my job at EA in 2007. And now I’m a citizen and I have a child.

I still want to go home and build a future there. But I feel providing a future for Maharlika is my focus now. Also, with the next-gen consoles coming in very soon, I feel I’ll be better equipped to do something awesome back home when I have a few more game projects behind me and more knowledge to share.

What would make you decide to move back to Manila again?

I think I would want to get Harley through her K to 12 education first before I fully relocate.

But if opportunity comes, maybe I can shuttle back and forth between SFO and MLA.

What are the things that have made you proud over the years?

This is a hard question to answer without seeming cocky and arrogant. I’ll simply say that I have been fortunate enough to attain successes in every medium I have chosen to work on. My work in early publishing and zines, my work on the Internet, in animation and in games. I’m proud of my career and the choices I’ve made.

What advice would you give to those who want to go down the same career path?

I had a very weird career path as many of the things I did and tried to do were not formal careers at the time I tried them. I was a web designer in Manila years before the web was even a viable industry there. User interface design for games was not even a course when I was in college. I guess I should say… don’t be scared to gamble and sniff out new career paths for yourself. If what you want to do is already in a textbook, you probably want to try to do something else.

Don’t be jaded. Allow yourself to be fascinated and awed. The world is only as amazing as you allow it to be. Also, always thank people who help you.

What advice would you have given your 15-year-old self?