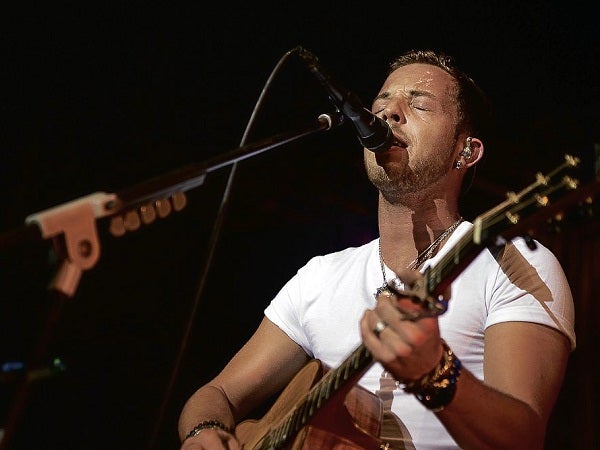 James Morrison in the flesh

James Morrison, in a white shirt that restricted circulation and a leather jacket that would make Marlon Brando proud, stepped in front of a large Smart Araneta Coliseum crowd with energy incongruent to the soulful, contemplative vibe of most of his songs.

The British singer was active when not shackled behind an acoustic guitar. As his backup singers ushered him in with vocal melodies, Morrison parted the curtains and pumped up the crowd as if he had just won an NBA championship.

In between fist pumps, he yelled “Philippines! Philippines!” Almost as if he was reminding himself where he was.

His throaty vocals went from strained then curved back to exquisite, as if he was one missed breath away from messing up.

Morrison was particularly generous with the hits, playing everything in his repertoire that cracked the charts.

He stripped down “Broken Strings,” his collaboration with Nelly Furtado. He played the song with just an acoustic guitar and backing keyboards and without a stand-in for Furtado.

He then finished his set with “You Give Me Something” before closing out the encore with “Wonderful World.

In spite of his reputation as a balladeer, his vocal chops came through in the more upbeat songs. “Under The Influence,” the first song he performed for his encore, was particularly impressive.

Straining with excess energy behind an acoustic guitar, Morrison belted line after line as if he just spent hours listening to Otis Redding records. He then parlayed the song to a few lines of Wilson Pickett’s “In The Midnight Hour.”

In the lulls between songs, Morrison was part sensitive guy and part cast member of Jersey Shore.

He dedicated “In My Dreams” to his departed father, saying, “This is a song for anybody who’s lost someone that they love and someone that’s close to them. I wrote it for my Dad, who’s up in the stars.” Seconds before, though, he cursed like he was sharing a booth in a pub with old friends. “Philippines, man! I’m so (expletive) stoked to be here. It’s about time.”

It didn’t take anything away from the concert. In fact, it was entertaining waiting for what Morrison was going to say next. It also broke the perception that he is a delicate minstrel who sings about love and the beauty of existence. Maybe Morrison can corner the market for tough guy romantic balladeers.