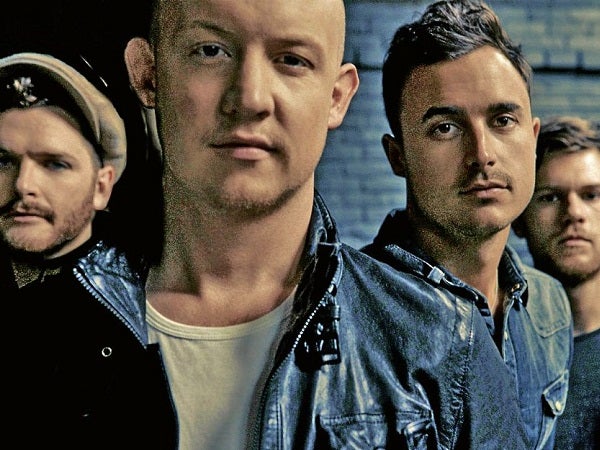 Delving deeper into The Fray

No matter where we are in the world, we Pinoy concertphiles stand out. Just ask The Fray frontman Isaac Slade. “We just played a show in Muscat (Oman) last night. It was crazy cool. This is our first show and it was insane. And to be perfectly honest with you, the craziest fans here were all from the Philippines,” he said during an exclusive phone interview with Super just recently.

“I’m hearing things, I’m seeing things, and I’m always meeting people. If they’re particularly crazy, I say, ‘Are you from the Philippines?’ And they almost always say, ‘Yes, of course!’” Slade added with a laugh. At least he now knows what to expect when he comes here with his band next month.

The American alt-rock outfit composed of Slade, guitarists Joe King and Dave Welsh, and drummer Ben Wysocki were scheduled to perform in Manila last June, but their show was cancelled due to unforeseen circumstances. Luckily for Pinoy fans, the concert will be pushing through on Nov. 10 at the Smart Araneta Coliseum.

Owing to the phenomenal success of their piano-driven debut singles “How to Save a Life” and “Over My Head (Cable Car)” in 2005, the Colorado-based quartet gained a steady following with subsequent hits “Look After You,” “You Found Me” and a cover of Kanye West’s “Heartless” from their eponymous sophomore album, and “Heartbeat” from the third offering, 2011’s “Scars and Stories.”

With catchy pop-rock hooks and wholly relatable lyrics courtesy of Slade, The Fray’s brand of alternative music remains as strongly emotive as it always has been, although with a bit more edge. In this interview, Slade talks about what’s behind the “darker” sound of their most recent album, what has (or hasn’t) changed with the band, and where they’re headed musically.

Compared to your two previous albums, “Scars and Stories” seems to be more raw and aggressive. What’s the story behind those “scars,” so to speak?

That’s a good question. There’s a dark element in that each guy in the band has (his) own crisis of some kind, whether it’s personal or professional or family-related. And I think there’s always a choice when you hit tough times: to let it sink the ship and just give up, fight back and bail the water out as fast as you can, or throw up a signal flare and get help. That’s probably the darkest thing there in the record.

The name “Scars and Stories” came from the song I wrote about the girls I’ve dated over the years. It’s funny ‘cause all these women were beautiful women, and I loved them. It didn’t work out, but they led me to my wife. And instead of viewing them as bad things you’re not supposed to talk about, I kind of view them as a map of my life. The people that were with me during that time were the scars that led me to where I am.

Any new artist or band that you listen to nowadays?

Wye Oak, Rogue Wave—I listen to those two bands probably the most. I know the guys are really excited about this new band called Metric that I’ve been listening to and really enjoying. And I’m rediscovering a lot of the classics; Fleetwood Mac, Rod Stewart had a band called Faces. I’ve been rediscovering the Rolling Stones as well, so I’ve been doing a good mix of old and new.

Are you working on new projects or albums right now?

We are, actually. We probably have 20 or 30 songs which we’ve started on and we’re going to start writing, putting it all together when we get home next week. We’re taking some time off before we go to Asia to start assembling it, then we’ll go back to the studio in December and start working on it then.

Can you give us a sneak peek on what we can expect from your fourth album?

I think, to be honest, we’ve made all the music we know for these first two records. It’s felt like the neighborhood that we grew up in. We’ve gotten quiet, we’ve gotten loud. We’ve gone aggressive, We’ve gone gentle. But we’ve always stayed within a certain city limit. And I think stylistically, lyrically and musically, we’re ready to leave town. We’re ready to go new places. And really, we’re looking at a fourth, fifth, sixth record, and wanting to go to new places.

It’s sounding very different from the third. I don’t know if it’s a good thing or a bad thing, but as artists we have to follow that instinct wherever it leads us.

Turning up the guitars

“Scars and Stories” was more guitar-driven than piano-based. Does it represent a new direction in your sound?

It could. I don’t know if we’ll continue with that, but we’ve worked with the producer, Brendan O’Brien. He did a lot of the Pearl Jam records, Springsteen, Rage Against the Machine, all these bands that just turned up the guitars. We picked him because we liked the style and we really liked how he made use of the drums and guitars. So we brought him in, and he really made the guitars and drums sound amazing, alive, real. So that might be a taste of the future.

Has anything else changed over the years?

I have more expensive shoes now. I used to have to buy them used from thrift stores, and now I can buy them new. I used to wake up at 3:45 in the morning to go work at Starbucks and make coffee all day. Now I get to wake up at 8 instead. (Laughter)

But other than that, we’re still the same guys. We still live in Denver, for the most part. We still keep our eyes open for inspiration, write songs about them, make records, and play shows.

Has your band name taken on a new meaning after 10 years together?

Nah. It still means fighting. (Laughter) We still have it out every once in a while, a good old-fashioned fight. But I think if you’re in a relationship with somebody for more than three days that’s real, honest, open, and loving, you’re going to have conflict. You’re gonna have differences of opinion. You’re going to be passionately opposite on a lot of issues, and that’s okay. It’s all part of the gig, how it works. So instead of avoiding conflict, instead of trying to never to fight, we’ve learned how to fight well.

What can we expect from your show in Manila?

You know, it’s funny. We strive to make these records sound like the live show. And for a place like the Philippines, where we’ve never been able to play a live show, all people ever get to hear is the record. So I’m excited to give them the real thing, where it’s four guys onstage, playing the song live. It starts breathing—the song comes to life, takes a shape and form. That keeps me touring. That keeps me excited and in the game.

It’s a good job; it’s fun to travel, and it’s great as an artist to record songs. But my favorite, favorite part of this whole thing is standing up in front of an audience and giving them an experience. So, yeah! Come out and see it!