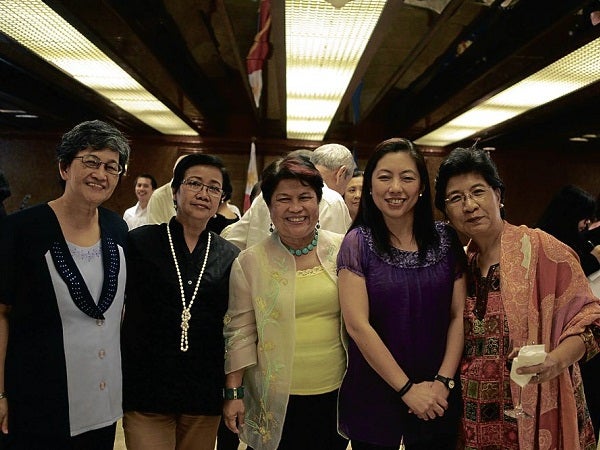 Our memories of Mario Taguiwalo

On a Sunday morning in April, Mario Taguiwalo, former Health undersecretary and political activist and thinker, passed away quietly at home, and was immediately cremated.  He had neither wake nor obituary—just as he had specified in the months before what he knew was an imminent death.

Mario was a very sociable and public persona—so his many friends and associates, P-Noy among them, were literally at a loss. How and where to gather together to celebrate Mario’s short but rich and accomplished life? How to thank him for what he has been to peace and health advocates and good governance groups and the Liberal Party? Clearly, it was the living that needed an occasion to grieve and eventually transcend their loss.

Thus, in early May, President Aquino hosted a private dinner in Malacañang to honor Mario. And it was truly a special evening among his many friends and associates for celebrating Mario.

The formal ceremony was predictably touching and humorous, Mario being known for his legendary wit. Among those who paid tribute to Mario was Dr. Alran Bengzon, Mario’s Department of Health boss during the Cory Aquino administration (although he was teased for his lengthy tribute), Secretary Mar Roxas, Ging Deles, Dinky Soliman, Karina David and Tanya Hamada  who all tearfully recalled times with Mario. Leah Navarro sang special songs that Mario loved in behalf of the Concerned Artists of the Philippines.

P-Noy recalled that when he first saw Mario during his mother’s term of office, he had no idea who he was and even thought that he was military. In the midst of the 2010 presidential campaign, as he prepared for an important TV forum, it was Mario who briefed him on public health.

When P-Noy saw him again, he realized he was not who he thought he was and, in fact, looked vaguely familiar. Was it because of “Iskul Bukol,” alluding to Mario’s foray into television and bit roles in several movies, including fellow Ilonggo Peque Gallaga’s “Oro, Plata, Mata?”

P-Noy, inspired by the moving rendition of the Our Father that the Taguiwalos’ only surviving son and tenor Homer sang to open the rites, dispensed with his prepared speech and talked about how we can truly pray the Lord’s Prayer only with sincere hearts.

But the highlight of the evening was the response of Mario’s wife, illustrator and book designer  Beaulah Pedregosa Taguiwalo. Not only was she eloquent and articulate, but she bravely addressed all the many difficult and curious questions people had during Mario’s reclusive period, after he was diagnosed with Stage 4 colon cancer  that had metastasized to his liver and lungs. This was a mere six weeks in July 2011 after they had lost their eldest son Mark to heart failure, when they as a family had not even wept nor mourned enough over him. This was also nine years after they lost their youngest son, Mike, at age 18.

And so Medical City became the Taguiwalos’ temporary home for six months while Mario underwent 12 biweekly chemotherapy sessions and six monthly stem cell injections. The choice of hospital was deliberate because its medical director is Dr. Alran Bengzon, also the first person the Taguiwalos had consulted about Mario’s condition.

While there was marked improvement and he was allowed to go home, Mario wondered about the quality of life, for his body felt exhausted and wasted. Beaulah recounts, “Mario decided that even if we had the resources, going to the hospital every week for the next 12 weeks, having an IV line inserted in whatever uncollapsed veins he still had left, then going home to recover only to go back to the hospital for more of the same is not a life.”

Beaulah consulted the Palliative Care doctor at Medical City and was reassured that it was an alternative for Mario to spend what would be his remaining days at home without pain and in familiar comfort. “We learned that once we stop the chemotherapy, the cancer will progress but he might even look better, feel stronger, live a little longer, and enjoy his remaining days free from the constricting requirements, side effects and expense of chemotherapy.”

Mario was asked what he would wish for, were he granted three wishes. His answer was immediate: he wanted to be rid of a small inconvenience, his colostomy bag; he wanted more time, a few more years, to do more of the work he loved. His last wish was to ensure that Beaulah and Homer would always be “safe, secure and adequately provided for.”

Mario was prepared for the inevitable. Because he was too weak to receive visitors, he had written a letter to family and friends a few months before expressing his last wishes. It said, “I wish all…to know that I only have the fondest memories and deepest gratitude and affection for them. May they find comfort and joy in gathering together wherever they are, whenever they can, to celebrate my life instead of mourning my passing.”

The months spent at home was a special gift for Mario, Beaulah and Homer. These were spent “doing what Mario and I never had the chance to do: to simply be together, by ourselves, for days on end… We had our whole 40-year marriage to savor all over again: talking to each other or not talking at all but just sitting side by side, each one reading something. Sometimes, we just sat and listened to the sound of the rain on our roof.”

It was apparent that during the last six months of his life, Mario missed the vigorous pace of work that he was accustomed to.  Beaulah recalls that he “once scribbled some words in a heartbreakingly lighter and more feathery script than usual, connected them with arrows, and lectured to me, his audience of one.”

Just before he was taken ill, he was poised to be appointed head of PhilHealth, an agency he had long written a position paper on.  Beaulah herself was not aware of PhilHealth, so that in the initial days of his hospital confinement,  she had innocently mentioned that she had heard that there were hospital benefits to be earned from this agency. Of course, Mario laughed about that.

Mario continues to be missed. A good friend of his, publisher Karina Bolasco, mourns at a life abruptly ended, when he still had so much to offer. “Mario was, without question, an engaged intellectual—he did not sit somewhere comfortable and air-conditioned and fiddle with theories he read in books. He knew what was real; he quickly saw things as they were.”

A popular Mario anecdote was about one lonely afternoon after his son Mike died. He received a phone call from former President Cory Aquino saying how moved she was reading the eulogy Mario had written for Mike. And could he please make sure he also wrote her eulogy?  How could his mood and his world not have brightened with that call?

Beaulah makes a constant appeal to friends who tend to describe the seeming turbulence in her family life in recent years as sad and tragic. She views the last six months with Mario as one of their best times together, a huge block of time doing all that they have enjoyed together.

Both she and Mario have found great comfort in “the certainty that when it is our time to die, it will simply be like crossing a river to join our two sons who are waiting for us on the other shore.”