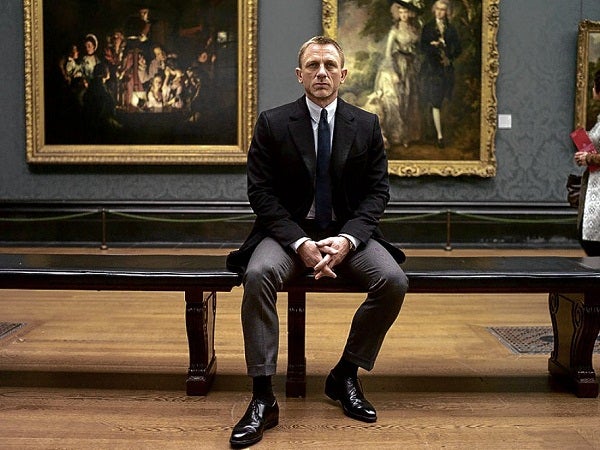 Every generation has its own James Bond, serving on her Majesty’s Secret Service. From the suave danger of Sean Connery to the glib camp of Roger Moore and the post-war panache of Pierce Brosnan, we’ve always had the Bond who reflected us and the world we lived in. In this violent, difficult new century, we have Daniel Craig, a conflicted, taciturn killer who was more about the job than getting his drink shaken, not stirred. We saw him first become 007 in 2006’s “Casino Royale” and then channeling his inner demons in 2008’s “Quantum of Solace.” He certainly isn’t your father’s Bond.

Now, he becomes the Bond we want. In the 50th year of the James Bond film franchise, we finally get the Bond movie we deserve. For Bond’s 23rd big-screen assignment, director Sam Mendes becomes the first Oscar-winning director to become Bond’s handler—and it definitely shows.  “Skyfall” thrills because it nods and winks at Bond’s celebrated history while setting the course for the franchise’s future.

From the very beginning, “Skyfall” has all the elements of a great Bond film. It has Adele (yes, that Adele) performing a song over opening credits crafted by Daniel Kleinman, the guy who actually made those iconic, over-the-top opening credits sequences.

But “Skyfall” also features a Bond tested to his limits. After failing in his last assignment, a weary Bond returns to his boss M (the ever commanding Judi Dench) after the agency is attacked by a mysterious enemy from M’s cloudy past. “Think on your sins,” warns the attacker. Attempting to shake off his own doubts and defects, Bond plunges headlong into a deadly chase that will take him to China and lead him to the enigmatic Silva (the flamboyantly frightening Javier Bardem), and ask himself if there is a place for James Bond in the complicated new world order. Monitoring Bond very carefully is intelligence oversight official Gareth Mallory (a post-Voldemort Ralph Fiennes) and along for the ride is MI6 field operative Eve (“28 Days Later’s” Naomie Harris). It’s a setup that is, obviously, licensed to thrill.

Mendes (who showed he could orchestrate meaningful violence in the criminally underrated “Road to Perdition”) reunites with “Perdition’s” Craig in a movie that bristles with fantastic, fierce action sequences as well as in-the-gut suspense scenes. He brings a dark, dramatic energy to “Skyfall,” something that suits Craig to a deadly T. “Skyfall” waits for just the right moment before brandishing its considerable cinematic weaponry, in the process changing Bond forever.

Among those weapons is a literal one, Bond’s Walther PPK pistol, which is brought back along with the Aston Martin DB5—the real “James Bond car”—in an array of knowing, nostalgic references to the earlier Bond films. But just as the Walther PPK is amped up for its modern reincarnation, so too is “Skyfall” a film that recalls the past and struts aggressively, arms drawn, into the future.

Since she first appeared in 1995’s “GoldenEye,” Dench has always brought a stately gravitas to the Bond films, and here her M shows just how far she will go to reach her objective. We know from “No Country For Old Men” that Bardem can play psychotic bad guys, but his Silva is something special, a scheming madman who is Bond’s equal and a throwback to memorable Bond baddies like “Thunderball’s” Ernst Blofeld and “The Man with the Golden Gun’s” Scaramanga. Talk about heavy hitters: Mendes, Dench and Bardem are all previous Oscar winners.

But the biggest draw in “Skyfall” is Craig, who, through trial by fire and water, reaches his full potential in the role as he makes decisions that define what Bond stands for and what he’s willing to do for it. Craig is sensational as a James Bond for our modern political inferno. Aside from the furious action he engages in, Craig brings a soulful purposefulness to 007, helping us understand why Bond is Bond. One character may as well be describing Bond when he describes Bond’s new gun: “Less of a random killing machine, more of a personal statement.” He is, now, in every way, our Bond.

Smartly written, carefully crafted and fueled with renewed intensity, “Skyfall” possesses all the elements of a good Bond film—and then makes something completely new with them, a movie worthy of Bond’s 50 filmic years. Everything just works. With Sam Mendes leading the way, “Skyfall” is the film that will define Bond for the new generation—where Daniel Craig finally replaces Sean Connery as the premier Bond actor—and, by remembering its storied, heroic past and daring to deploy 007 in the treacherous present, stands as the best James Bond film ever.