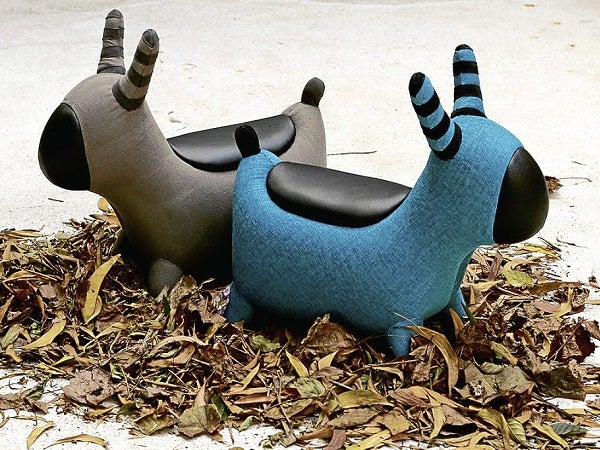 Funktion. Nothing could better describe Lilianna Manahan’s new collection for her “exhibit of useful things.”  But to define what she does, what material she prefers and what design philosophy she subscribes to would be putting unfair expectations on someone whose imaginings know no fences.

Her first exhibit in 2010, “Omelette,” of a dozen intricately painted ostrich eggs, had curious invitees to the exhibit marveling at the craftsmanship of the finely detailed narratives painted on each egg, sometimes embellished with gilded mouldings of 24-karat gold leaf.

With a lively mix of influences, from Byzantine backdrops to Dr. Seuss-like illustrations, dainty florals and ridiculous musings (like little men climbing up giant nose hairs), Manahan’s setup aroused even more curiosity. Perching them on pedestals with mirrors reflecting the painted backsides of the eggs, she nested them on faux grass, and hidden in the foliage were tiny plastic green soldiers with rifles aimed at the giant, elaborately tainted eggs.

The exhibit was a sell-out, with after-exhibit orders coming in for custom-made eggs. “But I didn’t want to be just known as ‘the egg girl.’” So she stopped taking orders and moved on to other material.

In early 2012, as one of Hive’s designers introduced by Kenneth Cobonpue, Manahan created the lighting fixture “Float,” a complete departure from the whimsical nature of the eggs, undoubtedly minimal by far in its austere mushroom-like shape, in ash wood veneer.

The floor lamp, with its tabletop version, featured downward lighting. With the upward light obscured by the opaqueness of the flat-top veneer, the downward light highlighted the Portobello mushroom-like shape of the lamp, which in the dark seemed to float, thus giving the lamp its name.

While working in Cobonpue’s atelier, she designed a dog bed which was exhibited at the Paris trade fair, Maison et Objet, in 2009. Shaped like a giant slipper (“a lola’s corcho,” she specifies) with bands of flat outdoor plastic fibers and a leather-upholstered “mattress,” it was inspired by a combination of Frank Gehry’s forms and her two Lhasa Apso puppies that constantly chewed on everyone’s slippers.

The items Manahan presents for “Funktion” bridge her sense of flight and groundedness: While the shapes and functions still reflect her deep delight in playfulness, her use of material and the execution of the pieces display a new kind of responsibility she endows her items with.  For example, in her use of tweaked geometric patterns of the Inabel weaves that clad her Escher-like stools, there is a conscious interplay of form and design.

Her vanity stand is a sentimental tribute to her grandfather’s original brass mirror stand, but by executing it in traditional marquetry technique with a checkerboard motif, heritage, inheritance and tradition take on a kind of quirky modernity.

“I’ve always had a fixation with different kinds of animals, from prehistoric animals to make-believe ones. I used to make up my own animals while doodling in class, and I guess these doodles created a language for my own set of animals which automatically come out when I start brainstorming for products.”

Perhaps from this thought sprang the idea of upholstered animals that move. Not quite carousel animals, nor stuffed fluffy ones, but sleek buffed-down remakes in leather and fabric that possibly ride like car seats.

Obviously a bookworm from childhood, Manahan considers bookends a necessity, having grown up surrounded by various types, from Venetian blackamoors and singeries (i.e. monkeys dressed in clothes) and Corinthian capitals made of escayola, to a modern Alessi book receptacle in fiberglass.

Again, Manahan’s penchant for crossing over styles and influences is seen in her brass bookends. From afar, they could be mistaken for some ancient animal god from Mesopotamia or Babylon. In truth, they are heavy brass-cast chickens perched on a block of local marble.

As this goes to press, we leave Lilianna Manahan tweaking yet more surprise pieces for the exhibit “Funktion: An Exhibit of Useful Things,” opening on Nov. 8 at “the premiere curio shop,” AC+632 in Greenbelt 5. Curiosity-driven, fueled by a landscape of exposure to all sorts of arts and literature, Manahan has gone from fine arts and industrial design at Central Saint Martins in London, to finishing at the University of the Philippines, working in Kenneth Cobonpue’s atelier in Cebu, and occasionally dropping in at Escuela Taller de Intramuros to confer with professional craftsmen, spending time with local weavers in Ilocos and other craftsmen in Cebu, and surfing in between.

Manahan remains in constant transition for her art and craft, unbound by rules outside of aesthetic and function.