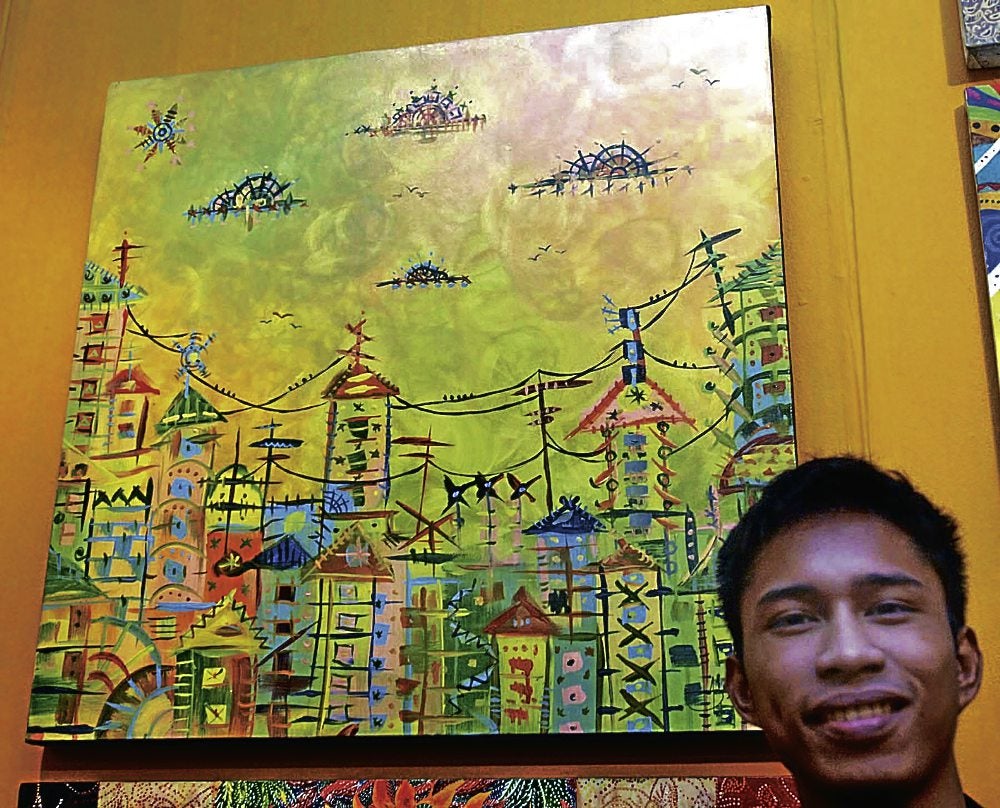 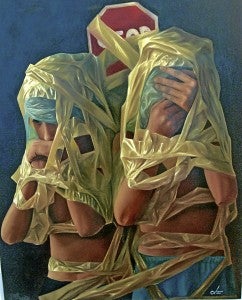 With about 1,250 entries from 55 schools all over the country, the 45th Shell National Student Art Competition may have produced the best collection of entries in  recent years, artist-judges and organizers said.

“This time, the entries were better than the previous years,” said artist-judge Raul Isidro, who was also a Shell winner during his student days at the University of Santo Tomas (UST).

The veteran artist attributed the collective stellar performance of the budding artists to a heightened awareness in both their craft and appreciation of sociopolitical events.

Theme of the contest this year is “Iba Ako,” which celebrated 45 years of Pilipinas Shell Petroleum Corporation’s student-art tilt and its achievement of having fostered individuality and diversity in artistic expressions.

Bagging 1st Place in  Oil/Acrylic  was Leomar C. Conejos of University of the East (UE), Caloocan, with his “Child Trafficking.”

The dark piece shows a striking image of two shirtless boys hastily plastered with packaging tape, depicting states of shock and debasement. One covers his mouth with his hands as if tempering sporadic breathing, while the other hides his head entirely. A stop sign stands unnoticed at the back, also covered with lines of packaging tape.

Ferd Angelo A. Failano from the University of the Philippines Diliman topped  Watercolor. His “Juan’s Struggle sa Mundong Nobody’s Perfect” shows the traditional technique judges looked for in the category this year —maximizing the see-through quality of the medium and playing with its translucence on paper.

Seen in the work are three figures: a young man in a suit whose stunned face is an unfinished illustration; Da Vinci’s Vitruvian Man, whose outstretched limbs double as the arms of a clock that appears to be the middle ground of the suited man; and a man seemingly carved out of marble reminiscent of Michelangelo’s masterpieces.

While some entries voiced out grave statements, others touched on lighter subjects. For instance, UP student Jezzel Lorraine H. Wee’s “Karambola” is a clay creation that is playful.

The Honorable Mention work shows three rascals in full play, tumbling and jumbled in a rumpus. Dressed in plain play clothes, the round naïf figures’ garment-details are painted with soft, mellow colors, complementing the baked tone of the children’s skin.

Third Place in Digital Fine Arts was “Kosminis Tranzitas” by Philip Wayne P. Paredes of UST. The surreal image depicts a woman clothed in billowing white sheets, floating in space above a plane of gray clouds. In place of the woman’s face is an egg-shaped digital cutout from a picture of a green-tinged cloud cluster surrounded by a halo of hair, or what appears to be a black, cosmic explosion.

When the Shell National Students Art Competition began in 1951, it was the company’s way of producing a corporate calendar and throwing in an incentive for emerging artists.

Now artist-judges hang on to the belief that the students who triumph in this competition are the country’s cream in the crop of visual-arts neophytes and the future masters of Philippine art. For the jurors, imparting knowledge and bequeathing skills to the next generations of Filipino artists fulfills their roles as vanguards of their profession on a whole new level.

“It is of utmost importance that we are directly involved in shaping the artistry of the youth, the next generation,” said artist-judge Renato Habulan.

They also clamored for a Printmaking category, which Shell has yet to act on.

More than making the big win, participants in this edition of the art contest said  they were after paving their careers as serious artists, improving their craft, and learning from their peers and idols.