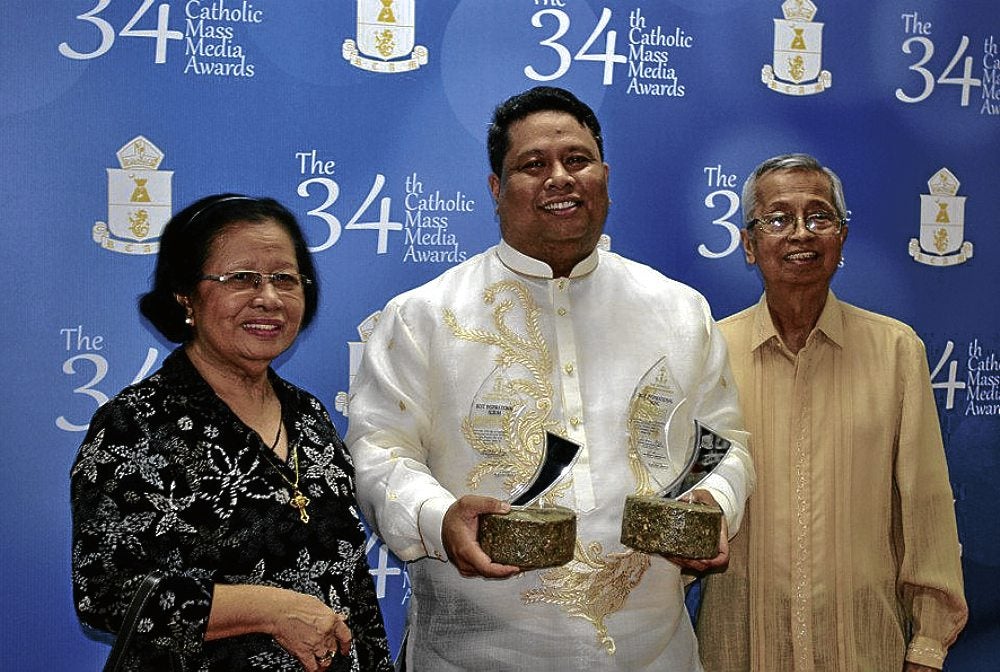 FR. ALLAN Antonio with his parents

The winner of Best Inspirational Album in the 34th Catholic Mass Media Awards(CMMA) is a collection of Mass songs, proof of how liturgical music could become mainstream.

Composer is Fr. Allan Antonio, a priest of the Diocese of Malolos and a student at the Conservatory of Music of the University of Santo Tomas.

Artists who sing for the album include members of Iconcertante (alumni choir of Immaculate Conception School in Bulacan) and Icons Grand Choir. Antonio, with instrumentalist Delia Valeriano, has worked with the singers for years.

Formally launched last year, the collection marked the first decade of Antonio’s service to the Church. The intention to deepen the appreciation of church choirs, even churchgoers, for Mass songs led to the album’s creation.

“This is a collection of my compositions since the time I was still in the seminary until now that I am 10 years in the ministry,” Antonio says in Filipino in his foreword in the songbook, which comes with the album.

Antonio, vice chair of the Federation of Tagalog Diocesan Directors of Liturgy (Subcommission on Music), describes his creations as simple but effective, to ease the challenge of reaching out to those not used to listening to liturgical music.

“The music we use during Mass needs to accord to the Roman Missal,” Antonio says, explaining that the compositions are Mass songs that can be distributed to every part of the Eucharistic celebration.

“Pilgrimage of Faith,” which crowns the collection as this year’s Best Inspirational Song, retells the message “Be not afraid,” a passage that appears 365 times in the Bible. This is the theme for Communion songs when the Gospel is about trust and faith.

Another gem in the 20-song album is “Paggugunita,” an Offertory hymn, First Runner-up in the CBCP Himig Sambayanan Song Writing Contest in 2005.

Aside from the arrangements, the songbook discusses the objectives, bases and significance of the compositions by using pertinent Church documents, such as General Instruction of the Roman Missal; the Lectionary; Musicam Sacram.

“Papuri sa Diyos,” for example, is presented with a history explaining why the song is regarded as one of the sacred elements of the Mass. This song is commonly referred to as the Gloria and is rendered on the album with a fresh arreglo.

It is notable that Antonio chose to have most of his compositions, with their corresponding explanations, written in Filipino. Eighteen of the 20 songs are in the native tongue.

“The album is a great contribution to the rich heritage that our diocese has been keeping,” says Malolos Bishop José Oliveros in a message to Antonio. “May it be a good inspiration for musicians and choral groups.”

Behind the vibrant cover design of “Umawit at Magpuri sa Panginoon” is Bulacan artist Aris Bagtas, known to comfortably blend religious images and events with Filipino customs as subjects in his work.

Admitting he is still a student with much to learn, Antonio writes: “Aaminin kong bahagya pa lamang ang aking kaalaman sa musika ngunit ako’y lubos na nagtitiwala sa mga awit na narito. (I acknowledge that I have yet to learn a lot in music but I have full trust in the songs that are in this album.)”

For copies, visit St. Paul’s store branches, or visit the Diocesan Commission on Liturgy office at Malolos Pastoral Center, beside the Basilica Minore of Immaculate Conception in Malolos, Bulacan.