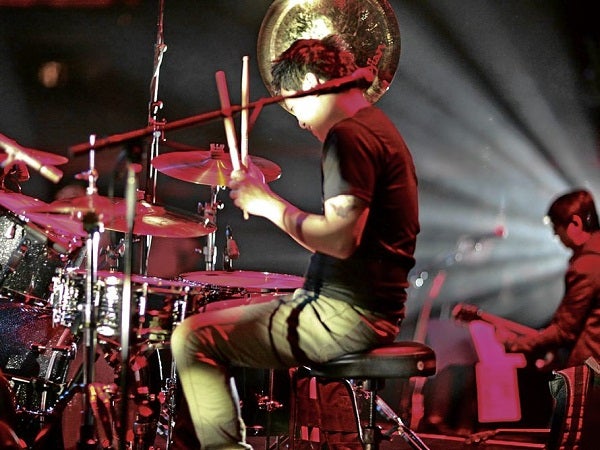 It’s the day before the flight and it’s hectic. I have errands, I have bills to pay, I need to buy last minute pasalubong and pick up the Team Manila tour shirts. I paid respects to Direk Marilou Diaz-Abaya. And then I packed.

I was at the airport at 4 a.m. to check in. Stopover in Japan. I read “Greems,” Marcus’ (Adoro) new book with illustrations by Apol Sta. Maria.

5:30 a.m. Jetlag-1, me-0. Free day. Went to Union Square. It’s cold so I bought jackets and a beanie. Went to another music shop looking for a snare but it was sold out. Marcus bought a couple of guitars and Shinji got a good deal on a distressor. In the afternoon we enjoyed a few drinks at an Irish pub.

4 a.m. Jetlag-2, me-0. Ogie Gonzales, an Instagram friend, took us biking by the pier. He was cool enough to lend us his sweet bikes. At noon we met up with Team Manila for some lunch and bike-shopping. Soundcheck at 4 p.m. was smooth. The sound guys are awesome. The monitor guy is Jesse Grinter’s clone. The show went well. So much love from San Francisco. Ely even added a couple of songs to the set list. Had an after-show dinner then went off to the hotel to pack.

Another no sleep run. We had a 4 a.m. lobby call time then it was off to the airport.

Touchdown LA. Welcomed by Quark (Henares) at LAX. He was hired to document the tour. Tried to steal some sleep after checking in, but was too excited to play LA. A lot of friends and family are coming. My cousin Ollie is my gangster bookie. Dropped by Sam Ash to buy a new snare before soundcheck. Excellent drummers Tim and Shinji helped me decide quickly which drum would be best for the job.

Soundcheck was quick and easy. We ran through a few songs and added “Fine Time” for Quark. My backstage dressing room is nuts. There was a stocked ref with all kinds of beverages, a basket of toiletries and food.

Tried to take a nap, but too many friends were dropping by the dressing room. Before I knew it, it was time to play. It was another good show.  I felt the Hollywood electricity Jesse Grinter talked about. An old friend Paco jammed on drums.

After the show, it was great to see my uncles and aunts backstage. My cousin Ollie pulled another hat trick on the strict Palladium security. Hahaha. I was running on fumes by the time we get to the afterparty in Hiwa. Next thing I knew it was …

I woke up in the couch of my lovely hotel room. After getting my wits together, it was brunch at Denny’s and off to MPLA for a tattoo session with the amazing Chris Garcia. I finally got my Squid 9 Reason tattoo! Thanks, Chris. A couple of hours later we met up with Team Manila and Glenn Jacinto at the Smashing Pumpkins show in Universal. The opening band was Anberlin. Great set. Everybody in the band was playing double duty. I was stoked to finally catch the Pumpkins who we missed in Manila because of the big storm. I hate to say it but this new band sounded better and tighter than the original line up whom I love. I’m sentimental about the old line-up but this band was badass. The drummer was bananas! I couldn’t help taking notes and stealing a few ideas. Thanks, Billy!

Another 6 a.m. call time at the lobby for the Canadian Embassy appearance. Had a big Thai dinner with family. It is always good to see them in LA.

Hung out with Tim and Ciara. Traded drum beats. Dinner party with the promoters. Then caught a show at The Echo. Watched Hospitality, Teen, Pageants.

Packed and checked out. We flew out of LAX. Stopover in Atlanta.

Arrived at 10 a.m. Check in at the awesome Marriott Springhill Suites. Slept ’til 4 p.m.

Soundcheck at 5 p.m. Skated inside the venue using Marcus’ longboard. Hung out backstage with the Zalameda twins and my cousins Ollie, Janice and Nina. Met a few friends from Candelaria. Great sing-along crowd. Meet and greet after the show. Fans flew in and drove from as far as Winnipeg. Went back to the hotel. Packed and napped.

7 a.m. flight out of Toronto. Stopover in Detroit.

10 a.m. touchdown Newark. Lunch was at a Chinese buffet. Perfect. Checked in and showered. Proceeded to the venue earlier than call time to get inked by Chris Garcia. No soundcheck. Overloading monitors. Difficult venue acoustics.

Caught the Lemonheads and Psychedelic Furs at Best Buy Theater.

Check out of the hotel. Stopover in Minneapolis.

Note: Our secret weapon posse on this tour was Sancho who played all the keyboard parts on guitar. He is an old friend from college and an amazing record producer and guitar player.