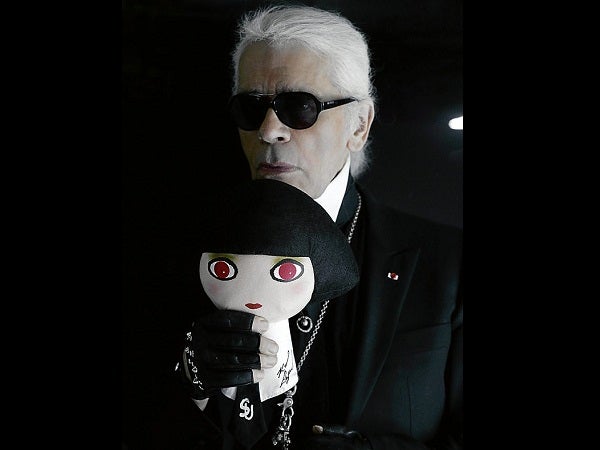 The big beauty launches happen in the run-up to the holidays. And fans of makeup, fragrance and skincare have a lot to look forward to in the next few weeks.

Shu Uemura unveiled recently its long-awaited makeup collaboration with Karl Lagerfeld. Umu, Dusit Thani’s Japanese restaurant, was awash in red Tuesday to usher in Mon Shu (My Darling) Girl, a Japanese manga-inspired character created by the fashion legend to represent his image for the collection.

Mon Shu sports a distinctly Asian blunt bob and has tiny red lips and big, red eyes—mysterious rather than sinister, according to her creator—and is dressed in Lagerfeld’s likeness: white shirt and a black tie.

Lagerfeld has had a longtime affinity with the Japanese makeup brand. He said in promotional interviews that he began buying Shu Uemura eye shadows some 20 years ago. He uses the palette like he would use pastel crayons to color his sketches and designs.

“I have never found this quality of pigment anywhere else,” Lagerfeld said. “I have used many other big brands, but Shu Uemura’s are very refined and so fresh. I love this black that gives depth to my designs, and the red is very passionate. I use this red to make up the models in my designs and create the silhouette. In Japan the reds are always really vivid.”

Lagerfeld met Shu Uemura in 2006, a year before the brand’s founder died. “I really liked his pioneer spirit and the sparkling energy in his eyes,” Lagerfeld said. “I do feel that everyone has to invent his/her own thing, and I think Mr. Uemura created something that no one else could.”

Lagerfeld himself shot the campaign, on which he collaborated with Kakuyasu Uchiide, international artistic director of Shu Uemura.

“It has been a longtime dream to work with Karl,” said Uchiide. “I believe his presence and creations are timeless… ‘Timeless’ is a common thread we share. We often forget time has passed when we’re experiencing something wonderful.”

The collection is now available in stores.

Double Serum Complete Age Control Concentrate is the latest reformulation of Clarins’ anti-aging solution, first sold in 1985. The company has gone on to improve the formula several more times, in 1996, 2002, 2007 and this year. It is being launched in Asia first.

The new formula, said Cheryl Yong, Clarins regional trainer, has an improved texture compared to the one launched in 2007. It also comes in a new package, a translucent red bottle divided into two barrels to separate the oil and water components, preserving their individual qualities before use.

“They’re each powerful ingredients,” Yong said, “but you don’t mix them until you pump the bottle.”

Double Serum contains 20 certified-organic plant extracts, five of which are exclusive to Clarins, while three others have patents pending, including the Cangzhu extract, which is said to boost cell vitality and is used in Chinese medicine.

The serum was tested on 500 women, 50 of whom were Asians. It retails for P4,750, and is also used in three facial treatments at the Clarins Spa in Rustan’s Makati.

Andre Joseph Hoffmann, president of L’Occitane Asia Pacific, flew in recently to launch the French skincare and perfumer’s 10th store in the Philippines at Newport Mall in Resorts World.

Hoffman said L’Occitane sends out 100 new products every year, and at least one star product in the stores each month “to keep the stores looking fresh, and for the customer to come back.” Twenty percent of its annual sales come from new products.

Since the Philippines is a strong market for fragrances, Verbena Sorbet was picked especially for the launch.

There are seasonal offerings such as this, but L’Occitane has consistent bestsellers, on top among them is the Shea Butter Hand Cream. Hoffmann said they sell a tube every five seconds somewhere in the world.

L’Occitane names its products after the key ingredient.

“We stand out because we’re unique in the industry,” Hoffmann said. “There are not many brands of our scale that have such strong connection with one geography. How many brands talk about where they come from? How many brands have their origin in the name? We’re known as ‘L’Occitane en Provence.’ We have a strong connection with Provence and nature. All our products’ names come from ingredients. We want to look authentic and we’re for the specific traceability of our ingredients.”

L’Occitane isn’t a 100-percent organic brand, though it uses Ecocert-certified organic ingredients. It may soon be moving toward the all-organic direction, according to Hoffmann.

“We bought three years ago an organic skincare brand called Melvita, and we’re developing globally. It’s now in 12 countries and has 40 stores in Asia. The Philippines could see Melvita in a few years. I don’t know how attractive organic products are to Filipinos, but if there’s a desire, the products are great, and the formulas are great.”

“We can’t keep up with the demand, so we aim to expand rapidly,” said Sheena Dy, group business development manager, who added they’re looking into a Cebu outpost in the near future.

“We don’t have luxury skincare for men in the Philippines, and Kiehl’s is the first one,” she said. “We’re very simple. Our packaging is like pharmacy medicine. We’re very straightforward, we don’t overpromise.”

At the Power Plant grand opening, Kiehl’s unveiled its offerings for the holidays: Aromatic Blends fragrances and body lotions and cleansers, four combinations of scents and ingredients from exotic locales: Orange Flower & Lychee (Morocco and Southeast Asia), Nashi Blossom & Pink Grapefruit (Kyoto and Brazil), Fig Leaf & Sage (France and Mediterranean Coast), and Vanilla & Cedarwood (Uganda and Southern USA). These will be in stores this month.

As its tradition, Kiehl’s has collaborated with another artist to design the packaging of its Holiday Crème de Corps Collection, 100 percent of the proceeds of which will benefit children’s causes. This year’s featured artist is New York pop surrealist Kenny Scharf.

Another limited collection to roll out in Rustan’s this month is NARS’ Andy Warhol makeup collection.