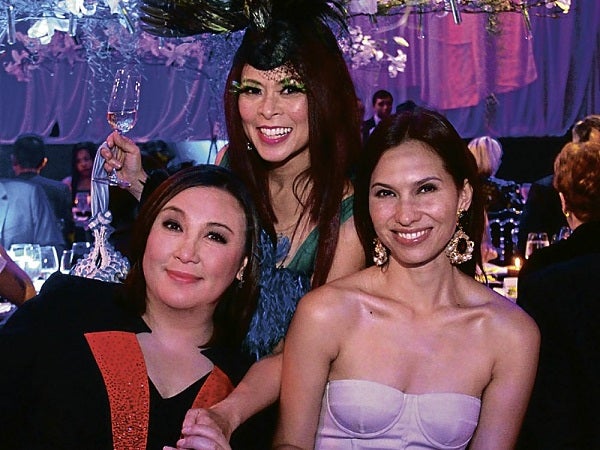 Luxe exuals splurge. These days, prestigious launches of luxury services and products have evolved into extravagant celebrations and unforgettable parties. It’s all about making a statement.

The Arena at the Mall of Asia was transformed into a majestic showground, featuring a wraparound stage framing long tables serving dinner to the city’s top brass. Lesley’s models sashayed on the runway, showing off his intricate beadwork and edgy silhouettes in classic, crocheted, white dresses to a burst of pastel-colored sheer gowns.

The sit-down dinner setup was just so beautiful. Giant orchids and white flowers draped the tables. The food was catered by Margarita Fores of Cibo fame, with chocolates by Villa de Conte for dessert.

Guests were welcomed by Kaye Tiñga, Colours organizer and fashion advocate, and Annie Palacios Naval, Mediascape COO. I greeted them in a feathery green gown that I topped off with a green bird hat that my stylish friend Divine Lee gave me. The H&M hat added so much height and glamour to my already beautiful gown.

Heading the guest list was Manny V. Pangilinan, head honcho of PLDT. He never fails to impress, as he announced that the Colours Gala would take place annually to recognize people who are committed to education.

The Colours Gala was also a charitable occasion, as part of the proceeds went to the Lightomorrow Project with Save the Children Foundation, a nonprofit organization that aims to make quality education accessible and affordable to the less fortunate.

Adding color to Colours was Blake, the Brit vocal quartet that flew in just for the show. Everything was ably directed by Ariel Lozada.

For one special night, the Voyager was in Manila simply to put up a party celebrating the timeless elegance of the Roaring ’20s.

The yacht is an extraordinary statement, a reproduction of the epic journey of Scottish whiskies from the beginnings of international trade. Having first set sail from Shanghai last month, the Voyager will touch nine key ports of call in Asia.

Manila was the fourth stop on its historic ocean tour. James Thompson, Diageo chief marketing officer for Asia Pacific, shared how the Walker family took the brand beyond a small town in Scotland and across the seas to exotic new lands, and left an indelible impact on history.

The Philippines was a key port in the original trading routes of the Walker family and was instrumental in helping John Walker & Sons achieve the global reach it enjoys today. Arif Esenc, managing director of Diageo Philippines, was thrilled to see the Voyager in Manila.

Yachts and parties can impress, but the small details are what spell success for an event. In this case, it was the whiskey decanter. The Odyssey is served in a baccarat crystal replica of the original decanter, an innovation of Sir Alexander Walker from 80 years ago. The Odyssey decanter moves to match the motion of the sea.

Our small group caught all these details in a short mentoring session led by Tom Jones, John Walker & Sons global brand ambassador. Tom is a splendid storehouse of information on whiskies, and a treasure that would make even the most teetotaling nondrinker break open a bottle and toast the high heavens. Among his reveals: Odyssey was crafted from Sir Alexander’s original, handwritten notes from 80 years ago.

It was perhaps fitting that we were sampling Odyssey together with the boys from Blake, who had also found their way from Arena to Voyager, thanks to tireless Tatler editor Anton San Diego. Blake’s progress was applauded by Fe Mir, Diageo marketing director, who also shared four Filipino game changers who will be their brand ambassadors: business magnate Joey Concepcion, fashion designer Rhett Eala, furniture designer Kenneth Cobonpue and filmmaker Brillante Mendoza.

The spectacular scene onboard the Voyager was topped off by a fabulous exhibition of fireworks lighting up the Manila night sky.

Speaking of fab, “Faaabvlous III,” a coffee-table book by master photographer Rupert Jacinto, will be launched on Nov. 13 at The Peninsula Manila Hotel. Vice President and recent birthday celebrator Jejomar Binay will be the guest of honor.

The exhibit will he held at The Gallery, arranged by Junjun Ablaza, and will be followed by a black tie “White Nights” Gala Dinner to be held at the Rigodon Ballroom.

Her Royal Highness The Duchess of Calabria is donating two of her own paintings, including a painting each by Marquesa de Valdeolmos and famed international artist Betsy Westendorp, for the benefit of OFPHI, Sto. Niño de Paz’s Save a Parish Program, with sponsorship support from HP, Titania Wine Cellar Inc., Rochar Cosmeceuticals Inc., MaxiOne Productions, Triple R Large Format Inc. and RJ 100.

I can hardly wait for “Faaabvlous III,” which is sure to be another fabulous evening, where once again, luxe can equal splurge.