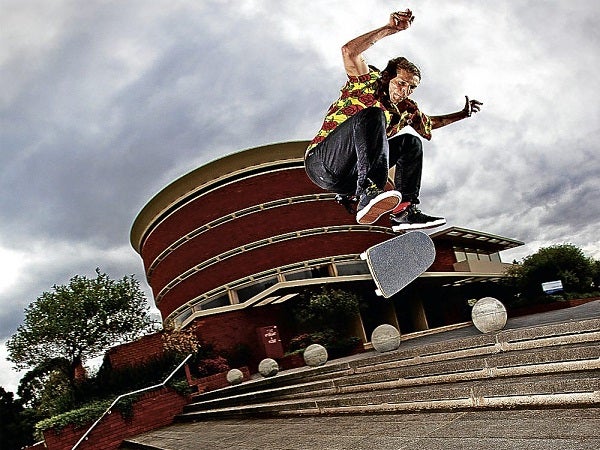 We’re used to hearing girls scream. It happens at every concert, at every fan meet.

Guys screaming? We don’t get that too often. It’s an odd, disconcerting sound—a low rumble as opposed to shrill shrieks, a full, solid expression of joy.

The eight American pro skaters, who are members of Team Supra, were in the country for the Philippine leg of their Supra Asian Tour. Manila was their fourth stop—they had been to Tokyo, Osaka and Taipei before coming here.

Although they were only in the country for a few days, the pros had the chance to skate at different spots including Raja Solaiman, Quirino Grandstand, Center of Gravity’s new demo park and Makati. Pepe said, “They were so happy. There’s so much hype everywhere they go. Every spot they go to is packed with people.”

The skaters also went to Tondo where they skated and performed tricks for underprivileged kids. “A lot of these guys are rags to riches stories—they started in the streets and now they’re so big. They want to give that same hope to people everywhere,” Pepe said.

Clips of the pros skating in the Philippines will be seen in the Asian Tour DVD when it comes out. “They did that with Europe, they did that in New York. Now they’re doing it for Asia. They’re going to play it in skate shops, show different spots in different countries and just promote skateboarding.”

There’s an active community of skaters in the Philippines and they made their presence felt that night at Urban Athletics. The place was packed. San Miguel Beer flowed and music played as the fans held on to their boards and eagerly waited for the skateboarding icons.

And when they arrived, they were met with fervor. Skaters crowded around the skating greats, shaking their hands, clinking beer bottles with them, taking pictures and asking them to sign their boards, shirts and Supra shoes.

“This is surreal,” one skating fan said as he held up his board that was covered with fresh autographs.

It was a great night both for the fans and the skating stars.

Both limited edition models will be available exclusively at Urban Athletics in the coming weeks.

Supra is one of the many lifestyle, footwear and apparel brands that Urban Athletics carries. Toby Claudio, founder Urban Athletics, said, “This place is really for the next generation of athletes and urban dwellers. That’s what Urban Athletics stands for—the love for the urban lifestyle and the passion for the streets and their sports.”

That Saturday night, Urban Athletics became more than just a store. For many skaters and fans, it became a place where skateboarding dreams come true.

Urban Athletics is at the second level of Greenbelt 3. Visit www.urbanathletics.com.ph. You can also find the brand on Facebook and Twitter.