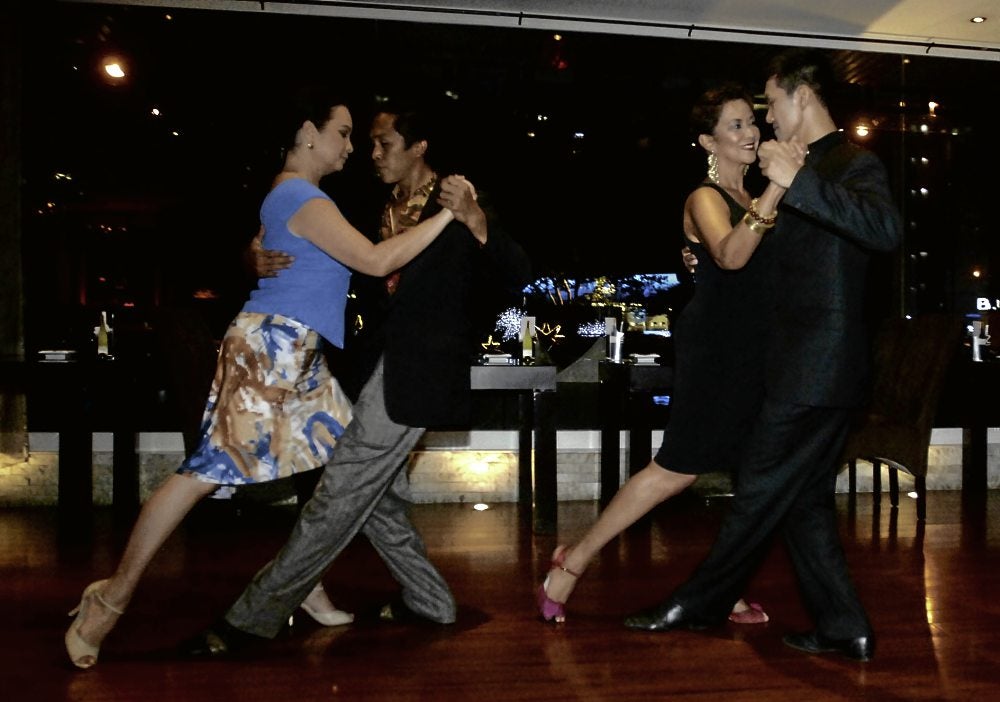 In high heels, statuesque businesswoman, Nina Halley pitches her head back. Her eyes are shut in rapture. Her partner maneuvers her seamlessly around the floor, to the somber strains of tango music.

Ballet Philippines president Margie Moran-Floirendo, meanwhile, looks regal as she shuffles across the floor. Both ladies are hooked on Argentine tango. As in any dance, it has a technique, but it requires sensuality and expression.

A dance which had sleazy beginnings in the 19th century with sailors in Argentine ports, tango has garnered an enthusiastic following, especially among the mature and sophisticated crowd.

A frequent traveler, Halley observes, “You go everywhere—Paris, Rome—and you will see the same people going to the same places.”

In the past few years, Argentine tango has flourished in the Philippines. Evaristo “Jun” Borja Jr., Edna Ledesma, Cecile Go, Jun Acampado, Cathy Prieto and Ogie Mendoza are the go-to Argentine tango teachers who offer private lessons. Organizers host a milonga or tango dance party in a restaurant such as Bykes Café at Lancaster Suites, Society Lounge at The Atrium and Ristorante L’Ambasciata D’Abruzzo on certain nights. One of the most well-known hostesses of the milongas is Mary “Rosebud” Ong, a former narcotics agent turned tanguera.

Borja took early lessons from visiting dance icon Gladys Fernandez in the ’90s. He took formal lessons in Guam. As a teacher, he adopted this system where Argentine tango is taught at different levels. Like most tangueros, he makes a pilgrimage to the mecca of Argentine tango, Buenos Aires, for intensive training.

Borja teaches the tango de salon or salon style, which follows the traditional conventions of dancing in crowded halls. “It’s a conversation without words. Nobody understands it but you and your partner as you embrace. You don’t memorize choreography.  Like a conversation, it comes from a reaction to an action. It’s all organic.”

He points out that Argentine tango can’t be learned from watching a video. The differences between a person who learned from a flat medium and the actual practice are the deportment, the precise footwork, the nuances in technique and the natural reflex actions, especially in maneuvering around the floor. A video can’t teach spontaneity, which is essential in Argentine tango or in a theatrical performance.

Unlike in other countries, the Philippines has one quirk: the woman has to pay her partner at rates ranging from P1,500 to P2,500 a night.

“In any part of the world, you don’t pay for your partner. Here, you need a DI because the men generally don’t dance,” says Floirendo.

Borja offers a solution: “You can come to my milonga without a partner and dance with anyone.” One just pays the club P600, which includes drinks.

Women have been urging Borja to be their partner and are willing to pay him P5,000 for the night. However, Borja would rather focus on teaching and coaching talents who invariably end up winning dance competitions.

He says he’s had students with scoliosis, an abnormal curvature of the spine, who improved their posture, thanks to Argentine tango. More importantly, it teaches patience. “Tango involves a lot of stillness not because of the absence of movement. There’s a lot of energy going on. It’s magical as you go deeper.”

Halley encountered tango when she and her late husband watched a tango performance at an old church. Inside, where thousands of candles were lit and the scent of roses wafted in the air, tango couples locked in embrace slithered sensuously across the floor.

In 2010, she hosted a professional, Maria del Carmen Nebio, who was the partner of visiting tango master Enzo Hoces, She watched rehearsals and took daily lessons. Halley then brushed up on her skills with Borja, then flew to Argentina.

In Buenos Aires, she observed that tangueros led a nocturnal life, waking up in the afternoon for práctica, then they would hit the milongas till early morning. On why it can be addicting, she explains, “With tango, you feel the music and its rhythm. As you get better, you start feeling the lyrics. The more you tango, the more you realize there’s lots to learn.”

To keep fit, Halley does weight resistance and Stott Pilates. Her trainers tailor her program to suit the sport, such as strengthening the core, lengthening the torso and improving balance.

“After a stressful day, I look forward to tango. You don’t think of work. You’re focused on every part of the body,” Halley says.

Floirendo took lessons with Hoces and Mauro Caiazza. While visiting London, she was awed by the sensual performance of the Tango Fire Company. She then invited them to perform at the Cultural Center of the Philippines as a fund-raising event for Ballet Philippines.

“After watching the show, I took lessons more seriously. I flew to Buenos Aries with my two daughters and took classes every day,” says Floirendo. “The learning process never ends. You have to correct your form and there are thousands of steps to learn.”

In Buenos Aires, a milonga night costs $9. The men are on one side while the women are on the other. During the cortina or interlude of non-tango music, the men go around to look for their partners through eye contact.

“I was so scared, I didn’t want to look,” recalls Floirendo. She came with friends, which made the dancing fun.

Floirendo keeps in shape through gym workouts and does the salsa at Arts in the City. “Any dance, done well, makes you feel good,” she says.

Interior designer Ivy Almario and husband-restaurateur Guillermo “Yong” Nieva were awed by Halley’s lithe and graceful presence when she performed the Argentine tango in her birthday party. They invited their traveling group, composed of happy couples, and took some lessons with Ogie Mendoza.  They also danced the tango by the sea in Halley’s beach house.

Almario had never danced in her life. She kept fit with gym workout. A natural dancer, Nieva would yank her out from her desk and get her to dance at 9 a.m.

“I like to distract her from her work. If not, she will keep on working for hours,” he says. “Ivy is the biggest miracle. She’s a quick learner. Now if you get her a DI, she will twirl and dance nonstop.”

To build muscles, she still pumps iron. But for cardiovascular conditioning, she dances tango, swing, salsa and boogie. They even do a mean lambada.

Almario is challenged by tango’s levels of progression and the aspirational standards.

“As I was doing kickboxing and boxing, I asked myself where this skill will take me, except when I defend him in the sidewalk. I told him, ‘Honey, if we do tango we have to get better,”’ she says.

Almario’s main advantage is that she is dancing with her significant other. While most women dancing with a DI will feel a certain connection, this couple is euphoric about the intimacy that it brings.

“Our energies are so together that even when we stop dancing, I still feel it,” says Nieva.

Asked how dancing together has enhanced their sex life, Almario replies, “Why, does it need help? Seriously, if you’re fit, the sex is always better.”