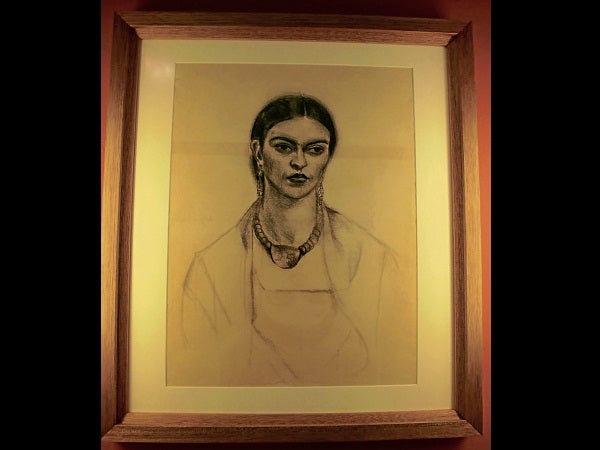 An afternoon with Frida Kahlo

Frida Kahlo has been described as a “female Van Gogh.” While the title may be dubious and even sexist, the point is made that, like her Dutch counterpart, the diminutive Mexican’s global reputation is partially the product of media hype which—in Frida’s case—arose only in the 1990s. Before that she was pretty much unknown. Today, she is at the center of a thriving backyard industry in her country, her face gazing out of T-shirts, bags, and many other products of which she may or may not have approved.

I first came across Frida while browsing in a Macao museum bookstore. I would, thereafter, have no trouble recalling her name. I needed only to think of the travel television program with our very own Susan Calo Medina! Of course the spelling is not exactly the same.

Like many others, I was drawn to the strange, tragic, tropicality of the Mexican artist’s works. There was, as well, a fierceness of form and hue that reminded me of the church retablos of Bohol or of the Department of Tourism instigated excesses at the Pahiyas festival. Eventually, I would learn more about the sad life of this remarkable woman from the movie starring Salma Hayek.

Part of the movie was actually shot in Frida’s childhood home—which is now a museum—in Coyoacan, a lively suburb of Mexico City. Here we were taken around by our enthusiastic guide who had huge onyx eyes like a primordial god. Stepping through the main portal, one is immediately hit by a cerulean bolt. I could almost not believe that the courtyard had been painted the same extraordinary shade when Frida’s parents still lived here. But this could easily be so, since such intensity is an everyday thing in Latin America. Our guide explained that the deep blue walls were the reason that the house was known as La Casa Azul.

The Casa was the meeting place for many of the intellectual stars of the period as well as international visitors. Leon Trotsky lived in the house for a while. He is said to have had an affair with Frida. His stay left its mark on the structure: the courtyard was fully enclosed on all sides for the safety of the Russian guest who was seeking asylum from Stalin. He would later move on to another residence—still in the same neighborhood—where he would be assassinated with an ice ax to the brain.

Frida’s rather un-Spanish surname comes from having a father who was of German-Hungarian descent. He had moved, at the age of 19, to Mexico where he eventually married a local woman who would become the painter’s mother. There is a photo of the whole family in the museum. Everyone is in very conventional suits but Frida is resplendent, a Carmen Miranda peacock in regional attire.

An interest in traditional Mexican creative expressions was quite common in the social circles of Frida and her husband, Diego Rivera. Artists looked to Mexico’s mythic history and vibrant folk arts for inspiration and for symbols which could help revitalize and deepen contemporary aesthetic production.

Walking through Casa Azul, one sees sculptural objects from the ancient sites. These provide the cue for certain design elements. There is, for example, a fireplace that looks like it sprouted from Teotihuacan. Dominating the garden is a kind of mound which resembles an Aztec pyramid. It is decorated with pieces from Frida and Diego’s archaeological collection. An annex designed by Juan O’ Gorman has an enclosure of volcanic stone which is festooned with shells just like many Mesoamerican edifices.

Areas of the abode project a joyful spirit akin to Mexico’s galaxy of crafts. The kitchen is lavished with yellow. It boasts of a mosaic of pebbles which spell out the couple’s names. Most rooms are decorated with wonderful objects originally used in festivals such as the Day of the Dead which would find their way into Kahlo’s visual vocabulary.

On view at Casa Azul is a stage-like tableau of macabre puppets fashioned by Frida, probably inspired by folk statuettes.  Moreover, in Kahlo’s oeuvre—consider Four Inhabitants of Mexico City and The Wounded Table—we detect how the artist used the images of clay idols and papier-mâché skeletons to provide a kind of shorthand for evoking nativistic themes. Frida also collected works by nonacademic painters who made icons for use in domestic altars. These icons are characterized by a kind of flattened perspective, solid color fields, and the integration of inscriptions, features mirrored by Kahlo.

I noted a number of massive sculptures that all seemed to have come from the same hand. These turned out to have been chiseled by an unschooled artist who Frida had encouraged. Yes, she was not just harvesting imagery and symbolism from traditional craftspersons but nurturing the seeds herself.

Over the foot of the artist’s bed is a frame with the faces of Mao, Lenin and Marx among others. Clearly Frida Kahlo honored a pantheon different from that of most of her compatriots. On top of the headboard is a picture of a dead child. Such a picture is very much in the tradition of what in the Philippines was called a “recuerdo de patay,” a last souvenir to remember the dead—especially infants. There is such a work by Simon Flores in the National Museum of the Philippines’ collection. Another example, this time of an adult, is the circa 1920s painting of Tomas Bordin by Victor Diores owned by the Bangko Sentral ng Pilipinas. Frida made her own funereal portrait: The Deceased Dimas Roxas at the Age of Three. Interestingly, the Diores painting shares with this work the fact that the dead are laid out on a woven mat.

Death and the fragility of the body and—by extension—of existence itself, were indeed truths to which Kahlo was no stranger. At a tender age, she experienced a horrible trolley accident that would leave her disfigured and in a constant state of pain. She broke her spinal column, collarbone and pelvis. She had multiple fractures in her right leg as well as a crushed foot. A long rod had pierced her uterus and she would never be able to bear children.

One writer has observed that Frida had never depicted the catastrophe in her canvases. The closest she came was a rendition of a row of passengers reminiscent of Mark Justiniani’s award winning piece on the lackadaisical occupants of a jeepney. Actually, the gut-wrenching savagery of her personal tragedy would resurface in other incarnations: her many self-portraits would appear, at first, to be inscrutably serene until one realizes that the necklace around the neck is a circlet of thorns, sharp spikes piercing flesh, drawing blood.

Still another source of suffering was Diego himself. It was on account of a discussion of his extramarital affairs that I would add a new word to my Spanish vocabulary: mujeriego or womanizer. The man even seduced his wife’s own sister.

All her life, Kahlo had to rely on crutches and body casts just to face the day. Yet she must have had such a deep reservoir of inner strength which held up not only her anatomy but also her spirit. What gumption she must have had to attach a mirror to the canopy of her bed so she could paint herself? What serendipity she must have possessed to construct an easel which could move her canvas up and down so she need not stand.

Perhaps the most moving exhibit in the whole house museum is not framed. It is a torso brace that is gaily, bravely, painted by its owner. It is one tiny woman’s reminder that, “no one has ever measured, not even poets, how much the heart can hold.”

Unsurprisingly, her nation’s eminent man of letters, Carlos Fuentes, has said of her: the moonlike headdresses opening up her face like the wings of a dark butterfly—Frida Kahlo showing us all that suffering could not wither, nor sickness stale, her infinite variety.

Please address all questions and comments to [email protected]